Interim Results of the 2021 Filing Season – Treasury Inspector General. “Lack of functioning printers and copiers contribute to the inability to reduce backlogs. Audit teams continue to perform on-site walkthroughs at the Ogden, Utah, and Kansas City, Missouri, Tax Processing Centers to meet with staff to discuss challenges they are facing as it relates to addressing the ongoing backlogs of inventory. A major concern that surfaced during these walkthroughs was the lack of working printers and copiers. IRS management estimated that, as of March 30, 2021, 69 (42 percent) of 164 devices used by the Submission Processing functions are unusable and others are broken but still functioning."

IRS employees stated that the only reason they could not use many of these devices is because they are out of ink or because the waste catridge container is full. The contract for supplies and service of the printers ended in September 2020. However, due to COVID-19, these printers remain in the Tax Processing Centers, and the IRS is continuing to use them. The employees we spoke with stated that the IRS entered into a new contract in October 2020 to obtain new printers from a different provider. However, they indicated that the new contractor may not have been coming into the sites to replace the old printers due to COVID-19 concerns.

At least 7 million people are likely to get unemployment tax refunds – Greg Iacurci, CNBC. “At least 7 million people likely qualify for tax refunds on unemployment benefits received last year, a new report suggests. The American Rescue Plan, which President Joe Biden signed in March, waived federal tax on up to $10,200 of jobless benefits, per person, collected in 2020. Taxpayers qualify if their modified adjusted gross income was less than $150,000. That limit is the same for all taxpayers, regardless of filing status.”

Tax Filing Season Renders Anxiety For Businesses – Michael Overstreet, Bloomberg ($). “As we approach summer 2021, more businesses have resumed normal (or close-to-normal) operations, and more employees have returned to work. Many aspects of 2021 seem brighter than 2020—but the 2021 tax filing season isn’t one of them. For a lot of businesses, the 2021 tax filing season is an anxiety-rendering rat’s nest.”

‘Many businesses continue to struggle with the economic impacts of Covid-19 along with significant changes in how (and where) employees perform their jobs. This coupled with the various changes in tax law, changes in due dates of tax filings and payments, and anticipation of future tax law changes is creating frustration with businesses in relation to the added administrative burden,’ explains Brian Carey, CPA, tax senior manager at Crowe LLP.

The SALT Cap Is a Poor Way to Tax the Rich – Martin Sullivan, Tax Notes ($). “This article will have few fans. Its lack of appeal is so broad that it spans the ever-widening U.S. political divide and manages to offend all. The left will cringe at the arguments for repealing the $10,000 limitation on deductions for nonbusiness state and local taxes. The right won’t like the endorsement of other proposals that, like repeal of the cap, increase tax system progressivity. Its primary contribution to the current debate is its focus on income measurement (and horizontal equity) instead of progressivity (and vertical equity).”

Biden Is Coming for the Tax Loopholes That the Rich Cherish – Peter Coy, Bloomberg ($). “You’d expect taking money from the 1 Percent to be child’s play in a democracy. The 99 Percent have less money than the rich, but they have way more votes. In practice, Robin Hoodism isn’t so simple. Rich people can rightly make the case that they’re already picking up a big share of the nation’s tab for defense, social spending, and everything else. They can argue, more controversially, that raising their taxes will discourage them from working, inventing, and investing, to everyone’s detriment. And if all else fails, they can hire lawyers and accountants to minimize what they owe the Internal Revenue Service.”

Biden’s $1.8 Trillion American Families Plan Is Supported by Nearly 60% of Voters – Claire Williams, Morning Consult. “President Joe Biden has spent the past week touting his $1.8 trillion economic spending plan that would reshape how the country thinks about a wide swath of domestic policies, from child care to free community college. While Biden’s plan faces a long road in Washington, it doesn’t appear to be a hard sell for the electorate. According to a new Morning Consult/Politico poll, 58 percent of voters say they support the package.” 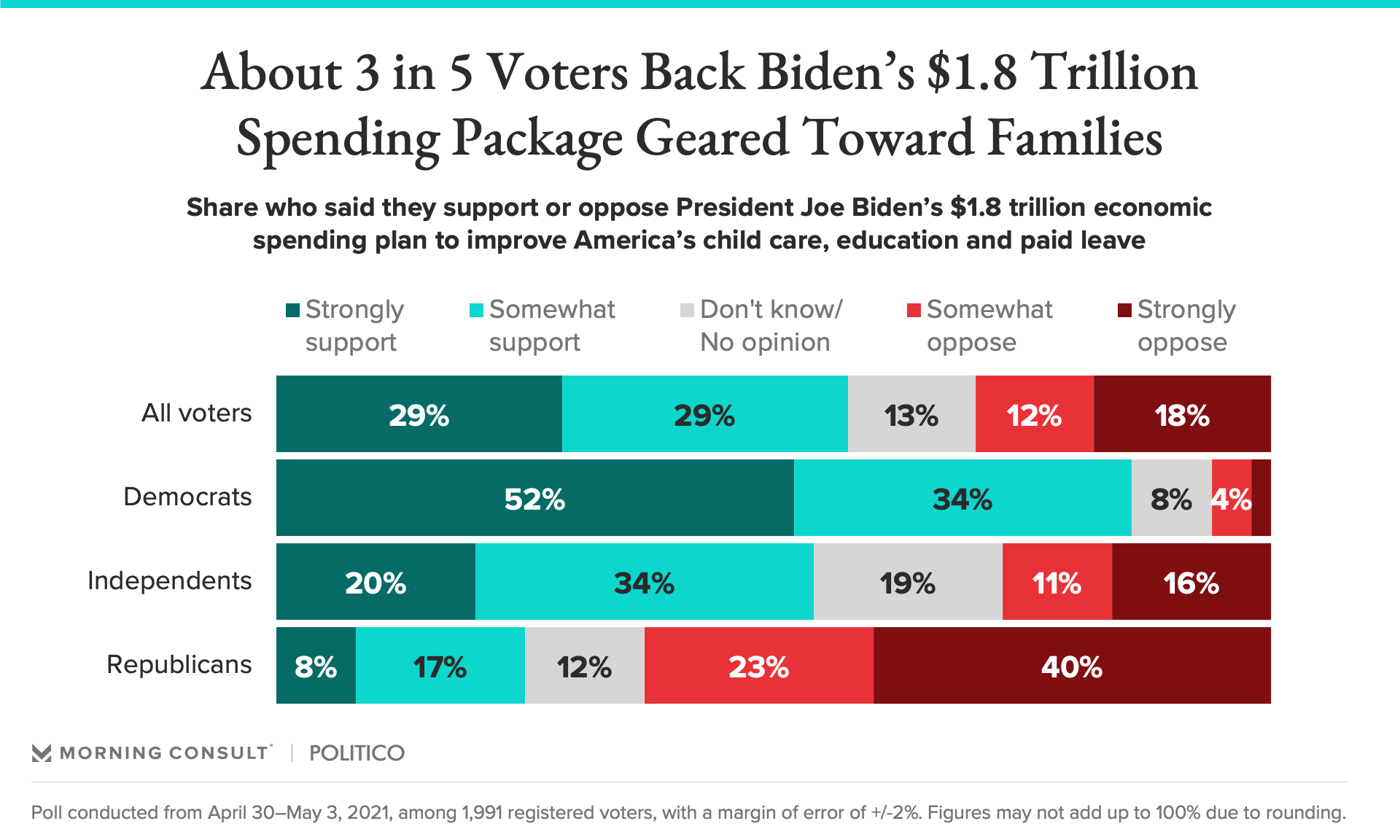 Infrastructure Talks Could Set Course of Biden Spending Plans – Andrew Restuccia and Andrew Duehren, Wall Street Journal. “President Biden faces a crucial test this week of whether he can find any common ground with Republicans as he pushes trillions in spending on infrastructure, child care and education. The president is hosting top lawmakers at the White House to chart a path forward amid mounting GOP opposition to his agenda and calls from some Democrats to move his proposals through Congress without Republican support.”

Congress is back! – John Bresnahan, Anna Palmer, Jake Sherman, Punchbowl News ($). “Between now and Memorial Day,President Joe Biden and congressional leaders in both parties will scramble to deal with infrastructure, taxes, police reform, gun control, a Jan. 6 commission, Capitol security, election reform and China, among other topics […] Nothing is likely to happen [on Jobs/Families Plan] until Biden’s full budget for FY 2021 is released, which is expected close to Memorial Day.”

Seeing double: capital gains tax debates in Washington and Washington – Kay Bell, Don’t Mess with Taxes. “In Washington, D.C., President Joe Biden's call for those earning more than $1 million to pay a 43.4 percent tax on their investment earnings instead of the current 20 percent tax rate has anti-tax lawmakers and lobbyists working overtime to stop it before it gets going. That total comes from a return to the pre-George W. Bush tax cuts ordinary income tax rate of 39.6 percent plus the 3.8 percent Affordable Care Act investment income surcharge.  Meanwhile, around 2,350 miles to the west, a new capital gains tax on Washington State residents has been enacted. But just how long it will be in the Evergreen State's tax code is unclear. A lawsuit challenging the new 7 percent state tax was filed before the bill was signed into law last week.”

Is There Tax After Death? – Donald Susswein, Tax Notes ($). “In this article, Susswein argues that taxing unrealized capital gains at death, and even requiring a carryover basis if imposing an estate tax, would be inconsistent with the principles of income rather than a fulfillment of those principles. He also explains why this is particularly true of unrealized gains on passthrough interests.”

What you need to know about employee retention credits and government shutdown orders – Jason Melillo and Ian Williams, Accounting Today. “Some consultants are promoting an overly aggressive narrative that every business can qualify for ERTC. That’s not true. While government orders may have impacted many businesses, qualifying any company requires careful consideration and review on a case-by-case basis. Business owners who are approached by consultants claiming that a whole industry qualifies for ERTC should be wary. For example, auto dealerships have been identified as one such industry, and business owners in that vertical should consider the risks.”

IRS News Release: Exempt Organizations Have May 17 Form 990 Filing Deadline (IRC §6033) – Bloomberg ($). “Tax-exempt organizations that operate on a calendar-year (CY) basis reminded that certain annual information and tax returns they file with the IRS are due on May 17, 2021, the IRS announced. Such forms include Form 990 series, Form 990-N, Form 990-T, and Form 4720. Tax-exempt organizations that need additional time to file beyond the May 17 deadline can request an automatic extension by filing Form 8868, the IRS stated. Exempt status can be lost for failure to file required forms for three consecutive years, the IRS warned.”

EU Biz Tax Paper Coming In May, Digital Levy Proposal In July – Matt Thompson, Law360 Tax Authority ($). “The postponed European Union white paper on the future of business taxation will be released May 18 and will be followed by the proposal for the bloc-wide digital tax July 14, according to documents seen by Law360 on Friday.”

My Kids are going to hate this, but it is National Clean Up Your Room Day. I informed them about this day, and they didn’t believe me.