Kristine Tidgren, director of the Center for Agricultural Law and Taxation at Iowa State University, said tax exceptions such as 1031 have allowed farmers, who often endure long periods without income between harvests, to retain as much cash on hand as possible for their operations. “Farming is very cash-poor,” she said. “Without a lot of these tools, you wouldn’t really be able to function in that sort of environment.”

A Look at the American Families Plan - Kristine Tidgren, Ag Docket. " The policy behind the like-kind exchange—which has, in some form, been part of the tax law for more than 100 years—is that owners who exchange property for similar property haven’t changed their economic position. Without this deferral, the tax obligation would reduce the money available to invest in their replacement property, reduce the ability of real property owners to improve property, and disrupt property markets."

Biden Doubles Down on Paying for Jobs, Families Plans - Jonathan Curry, Tax Notes ($). "'I’m willing to compromise, but I’m not willing to not pay for what we’re talking about. I’m not willing to deficit-spend,' President Biden said at a May 5 news conference, responding to a question about whether he'd accept a more modest hike in the corporate income tax rate than the 28 percent rate he has proposed."

Today’s order from the Northern District of California grants the IRS permission to serve what is known as a “John Doe” summons on Kraken. The United States’ petition does not allege that Kraken has engaged in any wrongdoing in connection with its digital currency exchange business. Rather, according to the court’s order, the summons seeks information related to the IRS’s “investigation of an ascertainable group or class of persons” that the IRS has reasonable basis to believe “may have failed to comply with internal revenue laws.” According to the copy of the summons filed with the petition, the IRS directed Kraken to produce records identifying the U.S. taxpayers described above, along with other documents relating to their cryptocurrency transactions.

Related: Bitcoin — What Should You Know.

She noted the IRS’s offshore voluntary disclosure program that ran from 2009 to 2018 raised a total of $11.1 billion, or averaging just over $1 billion a year. The program, which came at the height of the Swiss bank crackdown, allowed taxpayers with undisclosed foreign assets to come clean and pay the taxes and penalties they owed in exchange for avoiding criminal prosecution.

Make the IRS Regulate Tax Preparers? They Tried That Before - Kelly Phillips Erb, Bloomberg Tax ($). "But how can you tell the difference between a competent tax preparer and an inexperienced or unscrupulous one? The IRS has consistently argued that the answer is regulation."

Regulation isn't the same as competence. It does, however, give incompetents a credential.

The King of Pop, Michael Jackson’s, Estate Wins Big at Tax Court - Matthew Roberts, Freeman Law. "Because valuation drives the federal estate tax, it is not hard to guess that valuation issues are front and center in IRS audits regarding estate tax returns."

A celebrity should also consider how the estate will pay for the estate tax if a large portion of his or her assets are illiquid, especially if the celebrity has a valuable image and likeness, according to Bradford S. Cohen, a partner at Jeffer Mangels Butler & Mitchell LLP.

Heirs to a celebrity's inheritance may incur a huge tax liability but have very little cash on hand to pay that bill, Cohen said. The estate tax problem that may arise for a celebrity with a valuable image and likeness asset is when the estate does not have the liquidity to pay the tax based in part on the value of the image and likeness, he said.

Especially if the IRS values it at 40 times its actual value, as the Tax Court said it did in the Jackson case.

Related: The Importance of Business Valuation.

Delaying Required IRA Distributions Again Would Largely Help Only The Wealthy - Howard Gleckman, TaxVox. "RMD rules are intended to make sure that these assets are taxed during a person’s expected life. Without the rules, rich retirees could simply stash assets in tax-advantage accounts until they die, then pass them on to heirs."

IRS to fix its confusing tax ‘error’ on new 10-year rule for inherited retirement plans - Lynnley Browning, Accounting Today. "After quietly publishing guidance that said non-spousal heirs would have to take annual minimum distributions from inherited plans before cashing them out after 10 years, the agency admits — not officially, yet — that it made a whopper of a mistake."

Bozo Tax Tip #7: Use a Foreign Trust to Avoid Taxes! - Russ Fox, Taxable Talk. "Well, you will spend thousands to set up your trust, and if the IRS does catch on–and in these days where governments are exchanging tax information, this can (and does) happen–your foreign trust will have served only one purpose: It will have enriched the promoters who set it up."

Incentives for new firms come at a cost. Many states roll out the red carpet to attract new businesses, but that often means neglecting their existing firms, saddling them with high tax burdens. All the incentives in the world, moreover, may not be enough to attract a firm with long time horizons if their tax burden will be anomalously high once the incentives run out. In Ohio, a distribution center pays two and a half times as much once the incentives run out, even though a new firm is engaging in more taxable activity (purchasing potentially taxable machinery and equipment, and with its tangible property at its lowest levels of depreciation). 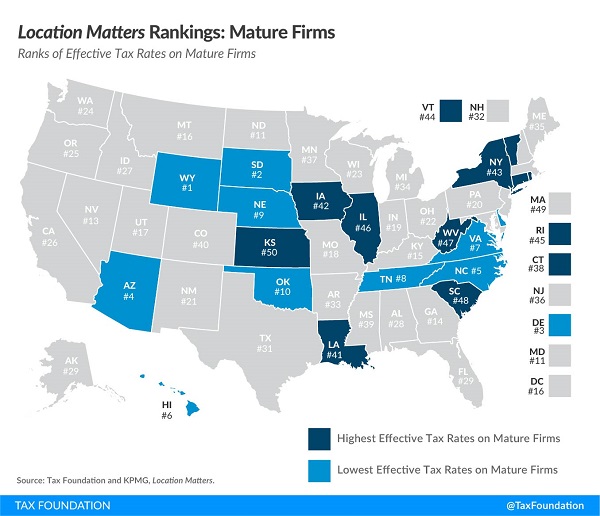 Reynolds proposes mental-health overhaul and $400 million in tax cuts - Clark Kauffman, Iowa Capital Dispatch. The bill would remove the contingent revenue triggers for the full implementation of an updated Iowa personal income tax with a 6.5% top rate and no deduction for federal taxes paid. The bill would phase out the inheritance tax and end Iowa's limited capital gain deduction for non-farmers, but allow qualifying pre-2023 gains being recognized on installment sales to continue to be Iowa tax-exempt.

Governor and Senate GOP back a tax plan; House GOP offers different plan - O. Kay Henderson, Radio Iowa. "The governor’s plan would speed up income tax cuts and get rid of the state inheritance tax. Both of those moves now have the backing of all Republicans in the legislature. However, cutting property taxes by $100 million dollars, by having the state take over the mental health system, has the support of just Senate Republicans and the governor."

According to the plea documents, [a] former Calexico, California, City Councilman... and a former commissioner on the city’s Economic Development and Financial Advisory Commission, accepted $35,000 in cash bribes from an undercover FBI Agent who they believed represented investors seeking to open a cannabis dispensary in Calexico. In return, [they] guaranteed the rapid issuance of a city permit for the dispensary and to revoke or hinder other applicants, if necessary, to ensure that the bribe payer’s application was successful. Both men also acknowledged that they had taken bribes from others in the past. Referring to this $35,000 payment, one of them told the undercover agent, “This isn’t our first rodeo.”

No tax charges are mentioned. I hope they included Schedule Cs on their reporting their bribe income. Business? "Permit facilitation."

Nurse your gratitude. Today is National Nurses Day, recognizing an underappreciated profession that has borne a big part of the battle against the COVID pandemic.