At a ceremony in Tukwila, Washington, Democratic Gov. Jay Inslee signed S.B. 5096, creating a capital gains tax, a measure he had sought since 2014. The law imposes a 7% tax on the sale of stocks, bonds and other high-end assets above $250,000 for both individuals and couples.

The move to establish a capital gains tax, which proponents are billing as an excise tax, inspired litigation even before it was signed.

Lane Powell PC filed a lawsuit in Washington Superior Court for Douglas County on behalf of several taxpayers on April 27, saying that the capital gains tax is unlawful and invalid under the state's constitution. The suit was brought on behalf of seven Washington taxpayers who own capital assets. While the tax is described as an excise tax, the tax is actually an income tax, which the state doesn't have, according to the complaint.

Washington's constitution forbids an income tax. I don't know whether Washington's courts will say this isn't an income tax, but it would be unwise to try to convince the IRS capital gains are something other than income when you file your next 1040.

The bill would reduce income tax rates for individuals, trusts, and estates, retroactive to January 1. It would establish the following tax rates:

H. 380 would also reduce the number of income tax brackets from seven to five, with the top tax rate dropping from 6.9 to 6.5 percent.

Iowa Extends Additional Deadlines: FTHSA & 529 Plan -Iowa Department of Revenue. "Governor Reynolds signed a proclamation on April 30, 2021, that provides an extension to owners of First-Time Homebuyer Savings Accounts to make required account and beneficiary designations. The proclamation also extends the time that owners of Iowa Educational Savings (529) Plans may make contributions to their accounts that may be considered made in tax year 2020. The proclamation extends both deadlines to May 30, 2021."

Outlier No More: Kansas Adopts Tax Reform with Wayfair Safe Harbor, GILTI Exclusion - Katherine Loughead, Tax Policy Blog. "After three years of deliberations, more than two-thirds of members in both the Senate and the House enacted tax reform and relief legislation Monday over the veto of Gov. Laura Kelly (D). Senate Bill 50 puts the state on firm legal standing by adopting a safe harbor for small remote sellers under the state’s sales tax and by excluding Global Intangible Low-Taxed Income (GILTI) from the state’s corporate income tax base."

Congress’ top tax man won't be a blank check for Biden - Brian Faler, Politico. "Even as many of his colleagues rally around the cause of sticking it to the rich, House Ways and Means Chair Richard Neal (D-Mass.) remains wary. He isn’t necessarily opposed to requiring the well-to-do to pay more, but he also isn’t convinced that Democrats’ need to fully pay for their plans with tax increases, especially when super-low interest rates mean the government can borrow cheaply."

Yellen Leaves Door Open to Deficit-Financing Biden’s Big Plans - Jonathan Curry and Andrew Velarde, Tax Notes ($). "President Biden has proposed a pair of major spending packages — the American Jobs Plan and the American Families Plan — that combined add up to roughly $4 trillion in new federal spending. However, that spending would be offset through a combination of significant tax increases on corporations and high-income taxpayers, as well as an $80 billion infusion of funds to the IRS, largely focused on enforcement."

The Tax Policy Center, a group run by Mark Mazur until he rejoined the Treasury Department this year as a deputy assistant secretary, assigns 80% of the burden to capital. That means 35% of corporate taxes fall on the top 1% of households, which earn about 16% of total pretax income.

The Tax Foundation, which favors lower rates and fewer tax breaks, says the split is 50-50. Harvard’s Mr. Desai said he thinks the split is about even. Career Treasury Department economists estimated in 2012 that capital bore about 82% of the burden, with labor shouldering the rest.

Democrats’ constituents would bear the brunt of Biden’s taxes - Peter Cohn, Roll Call. "The pain would be concentrated in Democratic strongholds. Biden’s average margin of victory was almost 29 points in the 50 richest House districts by 2018 adjusted gross income, according to IRS data. Connecticut, New York, Massachusetts, California and New Jersey had the most millionaires per capita, and accounted for nearly 40 percent of U.S. millionaires’ total capital gains."
Biden’s Capital-Gains Tax Increases Would Hit Few Americans, Study Says - Rachel Louise Ensign, Wall Street Journal ($). "Of taxpayers who filed Schedule D, the form for reporting capital gains and losses, only 2.7% had adjusted gross income of $1 million or more in 2018, according to Mr. McClelland’s analysis of Internal Revenue Service data. However, that group of taxpayers accounted for 62% of capital gains, Mr. McClelland said." The study was authored by Robert McClelland of the Tax Policy Center. 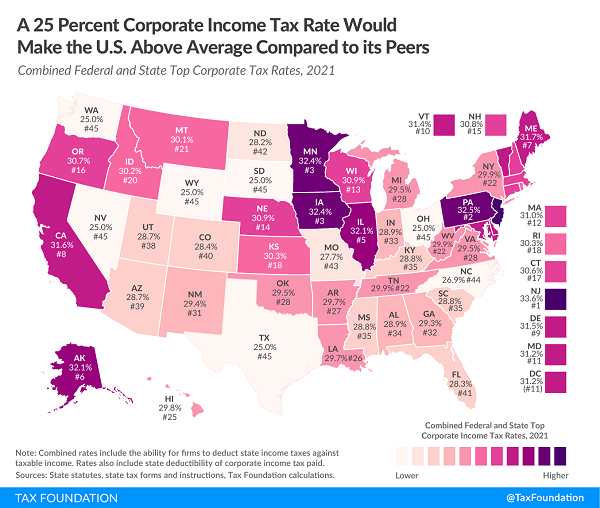 Michael Jackson Estate’s Tax Win a Warning to Aggressive IRS - Aysha Bagch, Jeffery Leon, Bloomberg Tax. "Another strike against the IRS was the court’s conclusion that its sole expert witness lied multiple times and also refused to answer questions directly throughout his testimony—which the court said affected its factfinding throughout the opinion."

The IRS can collect valuation misstatement penalties of 40% from taxpayers who are overly aggressive in tax valuations. The IRS has no similar incentive to restrain its own aggressiveness.

Michael Jackson's Estate Mostly Prevails In Valuation Fight With IRS - Peter Reilly, Forbes. "If Biden's plan for a bigger, better IRS more focused on the wealthy comes to pass, they may take away lessons from this case which may make it harder for whatever mega-celebrities pass away in the next several years."

“There are generally more audits of wealthy people, and traditionally more audits of Schedule C or smaller businesses,” according to Robbin Caruso, partner and co-leader of the national tax controversy practice at Prager Metis. “It’s more typical to see audits of Schedule C taxpayers than partnerships or S corporations. They can be as simple as a matching notice. For example, they didn’t include income reported on a 1099-INT. Or they might have sold stock and failed to report it. “

10 overlooked medical expenses that could make it worth itemizing tax deductions - Kay Bell, Don't Mess With Taxes. "6. Medicare and supplemental policies: Premiums for traditional Medicare Part B, which covers most general medical treatments, and Part D, prescription drug coverage, are deductible, along with any Medigap, or supplemental, coverage are tax deductible. If you opt for Part C, an Advantage plan, instead of traditional Medicare, that cost also can be deduction. However, Medicare Part A, the basic hospital coverage, isn't tax deductible if Social Security pays these premiums, which typically is the case."

Should Government Use Tax Incentives to Encourage People to Get The COVID-19 Vaccine? - Renu Zaretsky, TaxVox. "The American Rescue Plan (ARP) already entitles small employers to a refundable paid leave tax credit though September 30, 2021. But what if the federal government paired the employer credit with, say, a refundable tax credit available to individuals who are vaccinated during that time?"

I would start with a free Powerball ticket.

If I get anything done today, thank a receptionist for covering for me. Today is National Receptionists Day, in honor of the pleasant front desk warriors who send our calls to voice mail when we really need to get something done.