Apparently, the media did not get the memo that the first rule of Fight Club is: You do not talk about Fight Club. The upcoming brawl has been widely reported.

President Biden’s plan to raise corporate taxes to finance $2 trillion in federal infrastructure spending has touched off a new battle in Washington, where Democrats and Republicans — and powerful business lobbyists — already are clashing over who should foot the bill. The early squabbling threatens to undermine the once-rosy prospects for a swift deal on upgrades to the country’s roads, bridges, pipes and sewer systems, a goal many policymakers and boardroom executives long have said they share — even if they still can’t agree on how exactly to pay for it.

Biden clashes with business groups over tax hike – Alex Gangitano, The Hill. “President Biden is facing his first big test with the business community after industry leaders made clear Wednesday they will not support an infrastructure package financed in part through a corporate tax hike. The business community has long called for broad infrastructure legislation and previously embraced Biden's commitment to spend massive sums on roads, bridges and even climate change initiatives. But they’ve also warned that he would lose their support if he insisted on raising taxes for U.S. companies. Now, trade groups say they plan on making their case to lawmakers.”

Biden risks first major fight with progressives – Alexander Bolton and Mike Lillis, The Hill. “President Biden is on a potential collision course with progressives like Sen. Bernie Sanders (I-Vt.) and Elizabeth Warren (D-Mass.) over the size and scope of his newly unveiled infrastructure package. While many progressives applauded Biden’s $2.25 trillion proposal on Wednesday, they also cautioned it is only the starting point for negotiations.”

Pelosi hopes to offer SALT relief in infrastructure package – Bernie Becker, Politico. “House Speaker Nancy Pelosi said Thursday she hopes that Democrats can ease the current cap on state and local tax deductions as part of a larger infrastructure package. Several House Democrats from New York and New Jersey say they wouldn’t back any other tax changes unless the state and local tax cap is repealed. Republicans put a $10,000 limit on state and local deductions in their 2017 tax law, H.R. 1 (115), a move that particularly hurt those states and Pelosi’s home base of California.”

Combined Corporate Rates Would Exceed 30 Percent in Most States Under Biden’s Tax Plan – Garrett Watson, Tax Foundation. “President Joe Biden’s proposal to raise the federal corporate income tax rate to 28 percent would increase the combined average top tax rate on corporate income to 32.4 percent, highest in the Organisation of Economic Co-operation and Development (OECD), reducing U.S. competitiveness and long-run economic growth. While the focus has been on the federal rate, it is important to include state tax rates when thinking about the total tax burden on corporate income.” 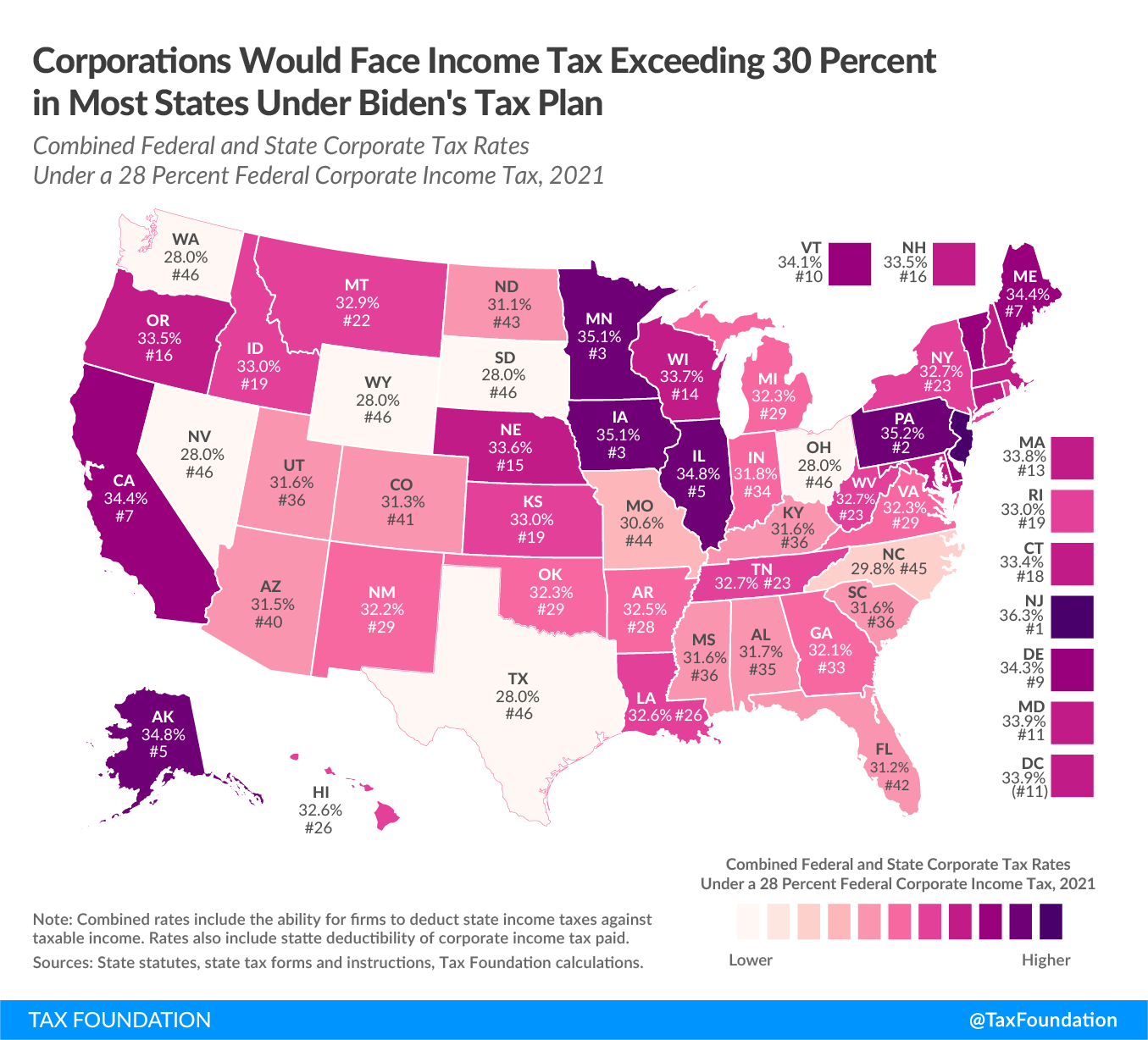 […]The relief Congress has extended broadens the number of small businesses that qualify for a version of chapter 11 that is cheaper and faster than the bankruptcy process used by large corporations. Nonpublic businesses with less than $7.5 million in debt qualify for the expedited process, up from a $2.7 million debt threshold.

White House moves to reshape role of US capitalism – Jonathan Easely and Brett Samuels, The Hill. “The White House is pushing an infrastructure bill that could reshape the discussion around capitalism as it seems to reestablish the federal government as a primary driver of how the economy should grow and function.”

Biden sets off Capitol Hill scramble on spending, taxes – Jordain Carney, The Hill. “President Biden’s rollout of a sweeping $2.25 trillion infrastructure plan is setting off a scramble by Democrats on Capitol Hill to get the bill across the finish line. Passing the bill — which includes massive spending on transportation, broadband, the nation’s water supply and manufacturing — will be a months-long slog laced with potential pitfalls as Democrats lean on their razor-thin majorities in both chambers.”

Congress Missed the Mark When It Made Some Unemployment Benefits Tax-Free But Reduced Future Assistance – C. Eugene Steuerle, Gordon Mermin, Noah Zwiefel, The Tax Policy Center. “When Congress enacted the American Rescue Plan (ARP), it included an implicit deal: It agreed to reduce the level of additional future weekly federal unemployment compensation to $300   but also to exclude from federal income tax the first $10,200 of jobless benefits unemployed people received in 2020. But a new Tax Policy Center analysis finds that shrinking an increase in assistance in exchange for a tax exclusion mostly benefits higher-income households, and is a bad deal for those jobless workers who need aid the most—those with the lowest household incomes.”

Statement by Secretary of the Treasury Janet L. Yellen on the President’s Jobs Plan – press release, Treasury Department. “[…] The plan revamps a flawed corporate tax code that incentivizes off-shoring and, instead, rewards companies that invest in America’s workers. It ends the global race to the bottom for lower and lower tax rates, something that will stop corporations from shifting their profits into tax havens abroad. It also pays, over the next 15 years, for projects and investments that will build the planet’s most state-of-the-art infrastructure and make America’s workers the most highly-skilled in the world.”

Nanny Taxes: What To Know About Being A Household Employer – Josh Luckenbaugh, TaxGirl.com. “While the coronavirus pandemic only further grew the industry, many families already used nannies to help take care of their children and elderly relatives. Whether it’s the potential savings, uncertainty about returning to a shared environment, or a multitude of other reasons, in-home care provides parents and caretakers a ton of benefits. However, it also comes with hurdles as well, with how to figure and pay the so-called nanny taxes being a chief concern.”

State Conformity to Federal Pandemic-Related Tax Provisions in CARES and ARPA - Katherine Loughead, Tax Foundation. “As of March 29, 2021, five states follow the CARES Act in allowing NOLs to be carried back up to five years for tax years 2018, 2019, and 2020. Five additional states offer state-defined NOL carrybacks of two or three years.” 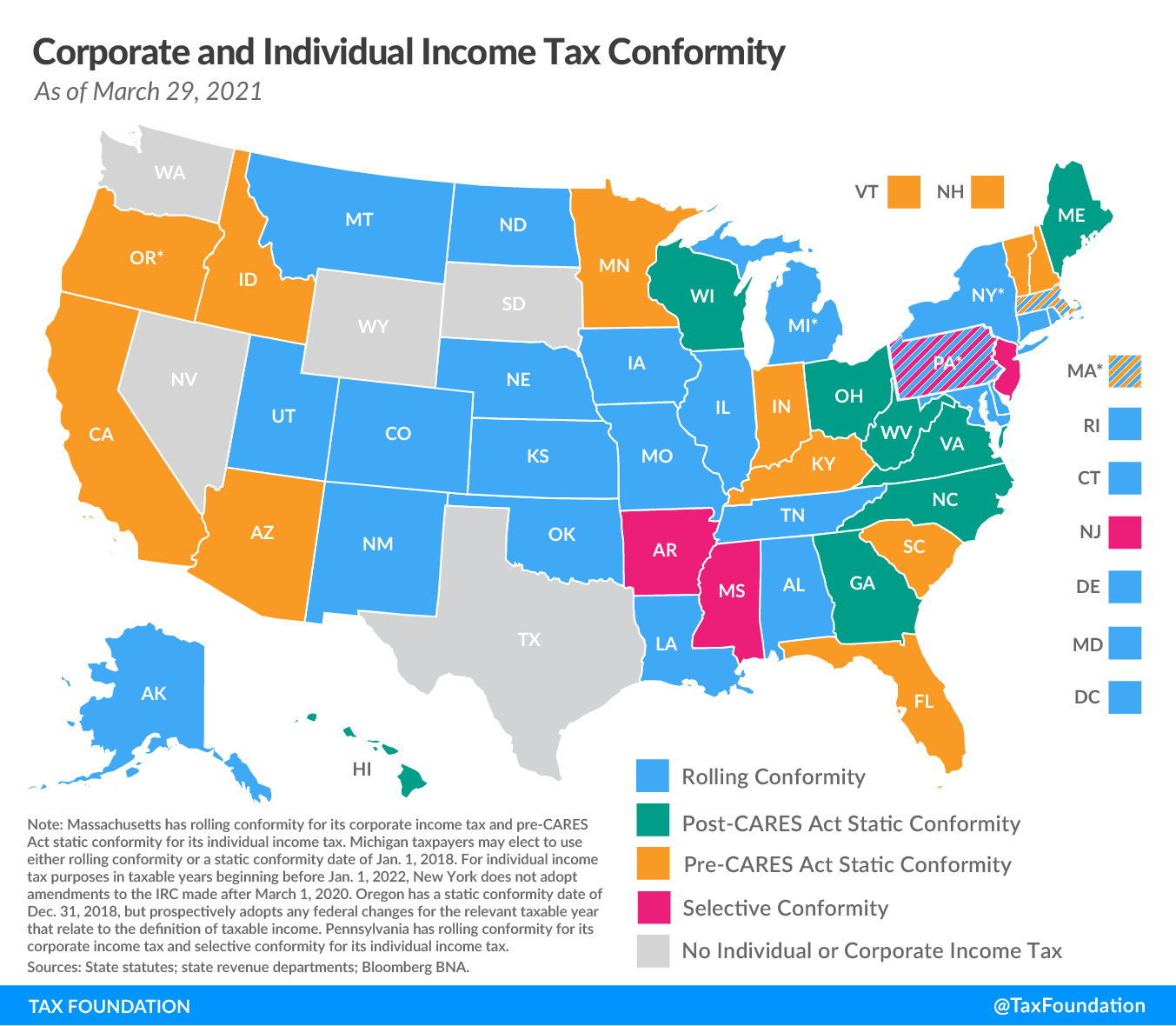 NY, NJ Dems Demand Tax Cut For Wealthy Constituents - Alex Hendrie, Americans for Tax Reform. “The top priority of several New York and New Jersey Congressmen is a tax cut for wealthy blue state residents that will do little or nothing to help the middle class.  The 2017 Tax Cuts and Jobs Act limited the deduction for state and local taxes to $10,000 in conjunction with lowering rates. This resulted in a net tax cut for the vast majority of American individuals and families across the country.”

House Democrats including Reps. Tom Suozzi (D-NY), Mikie Sherrill (D-NJ), Josh Gottheimer (D-NJ), and Rep. Bill Pascrell (D-NJ) are pushing to uncap the SALT deduction in President Biden’s next legislative package. Rep. Suozzi even said he would not support any tax change in the upcoming package if this provision was not included. Suozzi has also previously said he would publish a “blacklist” of any New Yorker that donated to a candidate that opposed uncapping SALT.

If Biden wants to pay for his spending splurge, then a value-added tax needs to be in play - James Pethokoukis, American Enterprise Institute. “[…]Limiting the tax hikes to wealthier Americans and corporations (keeping in mind that some of the burden of corporate tax increase falls on workers in the form of lower wages) is no way to put America on the path to a sound fiscal footing. The endgame here is probably a value-added tax (VAT) — and sooner rather than later would be better since implementation would then be less onerous and more gradual.”

For students, emergency financial aid grants made by federal agencies, states, Indian tribes, higher education institutions or scholarship-granting organizations due to an event related to the pandemic don’t need to be included in their gross income. Students shouldn’t reduce the amount of their qualified tuition and related expenses by the amount of an emergency grant. If students used any part of the grants to pay for qualified tuition and related expenses on or before Dec. 31, 2020, they could be eligible to claim a tuition and fees deduction or the American Opportunity Credit or Lifetime Learning Credit on their 2020 tax return.

IRS, Treasury disburse more Economic Impact Payments under the American Rescue Plan; total tops 130 million with more to come – press release, IRS. “[T] he Internal Revenue Service, the U.S. Department of the Treasury and the Bureau of the Fiscal Service announced they are disbursing several million more payments in the third batch of Economic Impact Payments from the American Rescue Plan. This brings the total disbursed so far to more than 130 million payments worth approximately $335 billion.”

Filing Season Update - Daily Tax Report ® Newsletter, Bloomberg ($). “It has been a busy tax-filing season for the IRS, after it started about two weeks later than normal on Feb. 12. The agency has received 11.6% more returns so far this year compared to 2020, according to data comparing March 13, 2020 and March 26, 2021. It has processed nearly 76 million returns, a 3.4% increase.” 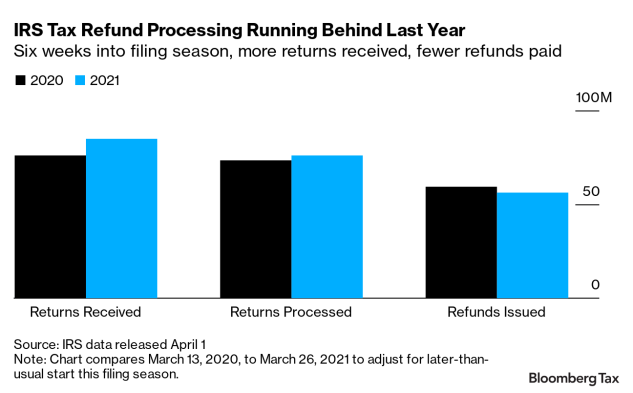 Filing Delay Spurs Questions on Overpayments, Gift Tax Returns – Kelley Taylor, Tax Notes ($). “Tax professionals are pondering what to do with the gift tax returns and the application of 2020 overpayments in light of the IRS extension of the income tax return filing deadline from April 15 to May 17 […] In March the announcement (IR 2021-67) postponing the due date for federal income tax returns to May 17 came as welcome relief to many who have been adversely affected by the COVID-19 pandemic. But that relief (detailed in Notice 2021-21) didn't extend due dates for estimated tax payments or tax forms other than Forms 1040, as the IRS did last year during the height of the pandemic.”

Pressure Builds on IRS to Extend Quarterly Payment Deadline – William Hoffman, Tax Notes ($). “Sixty members of Congress have joined the growing chorus of calls for the IRS to extend the April 15 deadline for taxpayers to make their quarterly estimated tax payments.”

Space Force! The Biden administration’s recent embrace of the Trump administration's Space Force should be celebrated today since it was on this day in 1968 that "2001 A Space Odyssey" premiered at the Uptown Theater in Washington, D.C.