The plan also emphasizes an increase in tax enforcement and authority to regulate tax preparers.

No effective dates are included in the outline.

Notable by their absence are any changes in estate tax rates or exemptions. The plan also lacks any wealth tax of the sort proposed by Senators Sanders and Warren.

Many of these proposals will be controversial and difficult to pass in a closely-divided Congress, but they will set the tone for tax policy debates for the year.

Tax-writing chairman releases ‘discussion draft’ aimed at boosting aid to families - Jay Heflin, Eide Bailly. "Neal’s plan could become the legislative base for what President Joe Biden is expected to propose Wednesday night in his speech to a joint session of Congress."

Biden’s Next Plan Targets Like-Kind Exchanges, Stepped-Up Basis - Jonathan Curry, Tax Notes ($). "The fact sheet confirms earlier reporting that Biden is seeking to raise the top individual income tax rate back up to 39.6 percent, and for households making more than $1 million, the tax rate on long-term capital gains would also be raised to 39.6 percent, up from 20 percent."

Biden to Seek $80 Billion to Bolster IRS, Tax Enforcement - Richard Rubin, Wall Street Journal ($). "The administration projects that its plan would generate about $700 billion over 10 years in net revenue, according to people familiar with the plan, who described it ahead of the official announcement."

Biden’s Proposed Capital Gains Tax Rate Would be Highest for Many in a Century - Alex Muresianu, Erica York, and Garrett Watson, Tax Policy Blog. "Biden’s proposal would reverse that—raising the top rate on capital gains up to 43.4 percent when including the 3.8 percent Net Investment Income Tax (NIIT). While not as high as the rates seen in the 1910s and 1920s, a 43.4 percent top rate would be the highest in modern times." 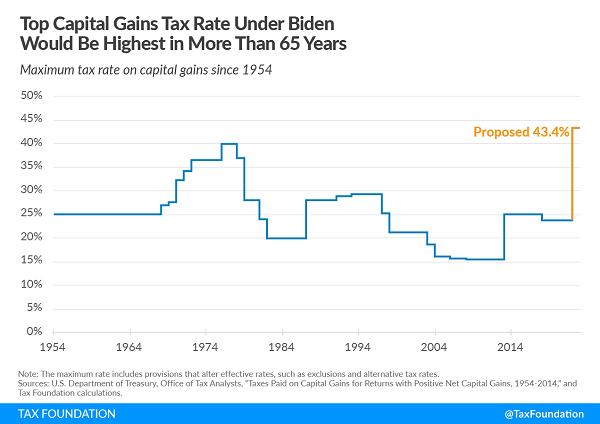 Value of Tax Hike Proposals Debated at Finance Panel Hearing - Frederic Lee, Tax Notes ($). "Scott A. Hodge of the Tax Foundation argued that the United States already has one of the most progressive tax systems in the industrialized world and that making the tax code more progressive by imposing a wealth tax, increasing the corporate tax rate, and enacting a minimum tax on book income would be economically damaging."

It’s a Good Time to Expand Tax Deductions for Charitable Donations - Marie Sapirie, Tax Notes Opinions. "The deduction for charitable contributions has passed the century mark in the tax code. A way to modernize it would be to make it available to taxpayers who claim the standard deduction."

When Unscrupulous Tax Return Preparers Make It Easy for the IRS and DOJ to Find Them - Jim Maule, Mauled Again. "Some unscrupulous tax return preparers might be difficult for the IRS to spot, or perhaps avoid detection for long periods of time. But others seem to be raising red flags so obvious that they might was well post 'Fraudulent Tax Returns Prepared Here' signs in their storefront windows or on their websites."

Are IRS Security Tools Blocking Millions of People from Filing Electronically? - Howard Gleckman, TaxVox. "The problem: The agency’s security processes are preventing millions of people from filing electronically and are slowing refunds. And they threaten to once again bury the agency under more paper at a time when it still is trying to process 1.7 million tax returns from 2019."

In my previous blog post, we discussed a combination of the nearly 30 million 2020 tax returns requiring manual processing, the backlog of unprocessed 2019 paper tax returns, congressional mandates to issue economic impact payments (EIPs) and provide other relief to taxpayers during the pandemic, IRS limited resources, and technology issues that have contributed to more and longer refund delays. Combine those circumstances with the extreme difficulty in speaking with a live customer service representative — employees have answered only about two percent of the roughly 75 million taxpayer calls to the IRS’s 1040 telephone line during the filing season as of April 17 — and the result is a very challenging filing season for taxpayers still waiting for refunds.

If you are waiting on your refund, you have lots of company.

Don't fall for these 6 tax refund myths - Kay Bell, Don't Mess With Taxes. "Myth 1: Calling my tax professional or the Internal Revenue Service will get me my refund sooner."

Tax flight was a myth, but Covid-19 may change that - Tala Hadavi, CNBC:

States like New Jersey and New York have increased taxes on the wealthy to balance their budgets. This, according to analysts, could harm them in the long run.

“This for a relatively small revenue hole has the potential to become a self-fulfilling prophecy. If you’re worried about the revenue losses because people aren’t coming back, then probably the worst thing you can do is impose very taxes that would make them not come back,” Tax Foundation vice president of state projects Jared Walczak said.

I have to note that tax flight was no myth, having seen it over years of tax practice. Covid-19 is making tax moves easier by making remote work more accepted, but big state tax increases make it much more worthwhile.

MTC Agrees To Study Taxation, Sourcing Of Pass-Throughs - Maria Koklanaris, Law360 Tax Authority ($). "The decision for the MTC to study taxation of partnerships comes as a growing number of states are passing legislation to tax partnerships in a different way. Traditionally, partners are taxed on the income that flows down to them and that is done via the personal income tax. In recent years, however, states have been adopting entity-level taxes on pass-through businesses."

Oscar Celebs Get Free Gifts Worth $205K, Pay 50% Tax - Robert Wood, Forbes ($). "This year’s gifts valued a $205,000 according to the New York Times NYT -1.6% include a vacation at Pater Noster, a lighthouse-turned-hotel off the west coast Sweden. 24-karat gold-finished vape cartridges from Hollowtips, an emergency hammer from PETA to free dogs left inside hot cars, games from Exploding Kittens, a brain-sensing headband from Muse, an anti-racist children’s book, and an NFT from Adventure Media and Tallard Capital."

Maybe this will lead to an Oscar-winning film about a movie star smashing car windows in Sweden while brandishing a golden vape device.

Today is National Superhero Day. We all can restore our superpowers of being able to roam the countryside and go to restaurants and entertainment venues by getting our COVID vaccinations.