The revenue-raising tax provisions, collectively dubbed the Made in America Tax Plan, are aimed squarely at corporations, leaving aside for now the tax increases on wealthy individuals that Biden has hinted at. The corporate tax changes largely echo what Biden proposed during the presidential campaign: raising the corporate tax rate to 28 percent, establishing a minimum tax on book income, and effectively doubling the tax on global intangible low-taxed income. Other changes, like eliminating the foreign-derived intangible income provision, are more surprising.

Biden’s infrastructure plan goes well beyond just improving roads and bridges, encompassing a broad array of initiatives aimed at providing clean energy and affordable housing, making electric vehicles more viable, and encouraging domestic manufacturing, among many others. Tax incentives play a role in many of those efforts, although the details of each are slim.

Also: "Notably absent from the list of revenue raisers the Biden administration is calling for are specific tax increases on high-income taxpayers."

We only have the President's outline to go by so far. It's uncertain when there will be actual proposed legislation to look at, and a lot will have to happen to get a plan through a closely-divided Congress.

Biden Follows Through on His Campaign Promise of Big Tax Hikes on US Corporations - Howard Gleckman, TaxVox:

His proposals raise both political and substantive issues. Before describing them, here is a brief summary of what he’d do:

Biden’s plan also includes proposals that were not in his campaign platform. It repeals two provisions of the 2017 Tax Cuts and Jobs Act: the base erosion and anti-abuse tax (BEAT) and a tax cut on income of US companies from exports of products and services created by intangible assets such as copyrights and patents (called Foreign Derived Intangible Income or FDII).

The Republicans’ 2017 law sought to lighten the U.S. corporate tax burden to make it similar to other countries’ systems. By contrast, the Biden plan hinges in part on the Democratic administration’s ability to get other countries to impose similar tax regimes so that a U.S. corporate headquarters doesn’t become a significant competitive disadvantage.

Details still need to be written, and the proposal may be changed or scaled back as it moves through Congress. Sen. Ron Wyden (D., Ore.), the top tax writer in the Senate, praised the plan’s direction in making corporations “pay their fair share” but noted that he’s unveiling his own international tax ideas next week. And Rep. Richard Neal (D., Mass.), his House counterpart, issued a statement backing the infrastructure plan without mentioning the taxes at all.

Biden $2.25 Trillion Jobs Plan Squeezed By All Sides in Congress - Eric Wasson, Laura Litvan, and Billy House, Bloomberg News. "Democrats already are laying ground work to draft and vote on the package, whatever its ultimate shape. Speaker Nancy Pelosi set a July 4 deadline for House passage. That could allow the Senate to finish work on the bill in early August before the month-long congressional recess."

President Biden’s Infrastructure Plan Raises Taxes on U.S. Production - Daniel Bunn, William McBride, Garrett Watson, and Erica York, Tax Policy Blog. "An increase in the federal corporate tax rate to 28 percent would raise the U.S. federal-state combined tax rate to 32.34 percent, higher than every country in the OECD, the G7, and all our major trade partners and competitors including China. This would harm U.S. economic competitiveness and diminish our role in the world." 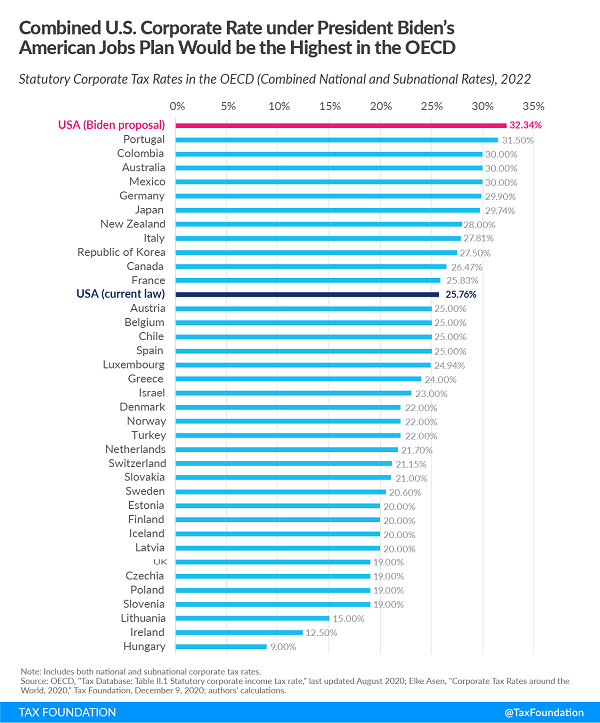 IRS to recalculate taxes on unemployment benefits; refunds to start in May - IRS:

There is no need for taxpayers to file an amended return unless the calculations make the taxpayer newly eligible for additional federal credits and deductions not already included on the original tax return.

For example, the IRS can adjust returns for those taxpayers who claimed the Earned Income Tax Credit (EITC) and, because the exclusion changed the income level, may now be eligible for an increase in the EITC amount which may result in a larger refund. However, taxpayers would have to file an amended return if they did not originally claim the EITC or other credits but now are eligible because the exclusion changed their income.

It's good that so many taxpayers will get their refunds without the time and expense of amending returns, and the speed of the refunds is at least as good as you could expect from amending. It is unfortunate that there are a few taxpayers who will have to amend to claim EITC, as inevitably many will not know this and miss out.

IRS Announces May Start of Automatic Refund Program for Unemployment Benefits - Ed Zollars, Current Federal Tax Developments. "While the IRS may be automating the process for most taxpayers at the federal level, state returns are another issue entirely."

What does this mean?  If you have to paper-file something with the IRS, or if you file an amended return with the IRS (all amended returns are reviewed by a human), you should expect it to take many months–maybe a year–to be processed.  If you file your return electronically, there’s about a 90% chance it will be processed just fine.  However, if your return is one of the 10% or so that falls out of processing, your return could sit in a virtual stack for months.  What’s worse is there is nothing you can do about this.

Nor is there anything your tax preparer can do to nudge things along.

Temporary tax law changes should be EASY! - Annette Nellen, 21st Century Taxation. "I think a lot of practitioner time was wasted and will continue to be wasted explaining this to clients and letting many clients know that much of the 2020 return needs to be completed to get a good estimate for the first quarter 2021 tax payment still due April 15. So, wouldn't it have been easier for the IRS to just say: If the due date for a return or payment is April 15, it is extended to May 17, 2021?  Yes!"

5 tax moves to make in April 2021 (after MLB's Opening Day) - Kay Bell, Don't Mess With Taxes. "1. Pay your estimated taxes: When the IRS announced it was giving taxpayers another month this year to file 2020 tax returns and pay any due tax, it didn't give estimated tax payers the same extension."

Taxpayers, Bankruptcy, and the Statutory Notice of Deficiency - National Taxpayer Advocate Blog. "Taxes and bankruptcy each are complex topics. Combining the two can be confusing and overwhelming for taxpayers, particularly when addressing the issue of tax assessment."

Related: Can I file Bankruptcy to Eliminate My Tax Debt?

They asked politely, and they posted instructions on the web, but the IRS says they've run out of tools for retrieving stimulus payments made to the dead without seriously inconveniencing the living.

As of February 28, the IRS had recovered just $702 million (57 percent) of an estimated $1.2 billion sent to deceased taxpayers during the first round of economic impact payments (EIPs) authorized by the Coronavirus Aid, Relief, and Economic Security Act (P.L. 116-136), according to a March 31 Government Accountability Office report on the federal government’s COVID-19 response.

Fund-raising the dead is a challenge for even the IRS.

So much to celebrate! In addition to being baseball's opening day and April Fool's Day, it is National Once Cent Day, in honor of all the pennies in your sofa. It is also National Burrito Day and National Sourdough Bread Day. With so much happening, it's amazing any of us have to work today.