Many elements of the preliminary tax plan reflect ideas from Mr. Biden’s campaign, including raising the corporate tax rate to 28% from its current 21%, according to the people familiar with the discussions. The White House plan would also increase taxes on companies’ foreign earnings in changes companies say could discourage investment in the U.S. and hurt U.S. companies’ ability to compete in foreign markets.

For the second tranche, the plan would raise the top marginal income-tax rate for high earners and increase taxes on investment gains. During the campaign, Mr. Biden proposed raising the top income-tax rate from 37% to 39.6% and taxing capital gains at roughly the same rate as income for the highest-income households.

Tax on appreciation at death is also in the mix.

Ohio Extends Tax Filing, Payment Deadline - Ohio Department of Revenue, vis Tax Notes. "The new deadline is May 17, an extension of approximately one month from the original deadline of April 15."

That leaves Arizona, Hawaii, Idaho, and Iowa as the states with income taxes that have not adjusted their due dates to conform to the federal May 17 individual tax return deadline.

Tax Filing Deadlines: Theory and Practice - Jim Maule, Mauled Again. "Though in theory states can set their own filing deadlines, and a few actually have regular deadlines later than April 15, as a practical matter, states would generate much misery for taxpayers and tax return preparers if they set deadlines earlier than April 15 or whatever temporarily extended deadline is set for federal income tax purposes... f it turns out that one or more states do not change their April 15 deadline, the consequences of nonconformity with respect to the filing deadline will be apparent very quickly. It’s not pleasant when substantial numbers of taxpayers in a state end up needing to file amended returns."

Treasury Secretary Janet Yellen on Wednesday cautioned that it will likely take the full statutorily allotted 60 days for her department to issue guidance on states providing tax relief to their citizens while also accepting funds from the recently enacted $1.9 trillion rescue bill...

The recently enacted $1.9 trillion rescue bill provided $350 billion to U.S. territories, states, and local and tribal governments to contend with COVID-19 related issues. While these governments can enact tax cuts, funds from the rescue bill that are received by these entities cannot be used to offset the revenue loss from those tax cuts.

This leaves state legislatures that are considering tax changes uncertain as to whether the changes will cause them to lose billions in cash from the rescue bill. For example, the Iowa Senate has approved a bill lowering tax rates, but the Iowa House has yet to act.

Yellen pledges to work with Congress to ease SALT cap - Laura Davison, Accounting Today. "Yellen stopped short of committing to any particular plan. She said that there are bipartisan proposals to repeal the $10,000 cap on the tax break entirely, making the deduction unlimited. Another option is increasing the cap, she said. President Joe Biden’s proposal to limit itemized deductions for high-income taxpayers at 28 percent of their adjusted gross income is another way to expand the SALT deduction."

More IRS Correspondence Follies - Russ Fox, Taxable Talk. "Second, an ongoing major issue is that the IRS has been issuing Notices of Deficiency before they read responses to AUR notices. Taxpayers are forced to file Tax Court petitions to preserve their rights, adding more backlog into the system."

As of December 25, 2020, the IRS had more than 11.7 million paper-filed individual and business returns that still needed to be processed" - Treasury Inspector General For Tax Administration report, "Results of the 2020 Filing Season and Effects of COVID-19 on Tax Processing Operations"

CA9 Holds in Boyd that Nonwillful FBAR Civil Penalty Is Per Form Rather Than Per Account When Correct Delinquent FBAR Is Filed - Jack Townsend, Federal Tax Crimes. "Finally, important to the majority’s outcome is that penalties should be construed in favor of the party penalized rather than the Government."

There are basically three areas that need pre-disaster attention:

Form That May Make Or Break Rebate Credits For Noncustodial Parents - Peter Reilly, Forbes ($). "It is possible that a Form 8332 for the year 2018 could make all the difference in a dispute about a 2020 rebate credit. It has to do with the peculiar way the credit works, which we can illustrate with a rather extreme example."

Did You File a Superseding Return? If So, Read On - National Taxpayer Advocate Blog. "IRS Counsel Reverses Course: Superseding Returns Filed on Extension Don’t Supersede for Purposes of Which Return Controls Assessment and Refund Claim Dates."

Does Your State Levy a Capital Stock Tax? - Janelle Cammenga, Tax Policy Blog. "Unlike corporate income taxes, which are levied on a business’s net income (or profit), capital stock taxes are imposed on a business’s net worth (or accumulated wealth). As such, the tax tends to penalize investment and requires businesses to pay regardless of whether they make a profit in a given year, or ever." 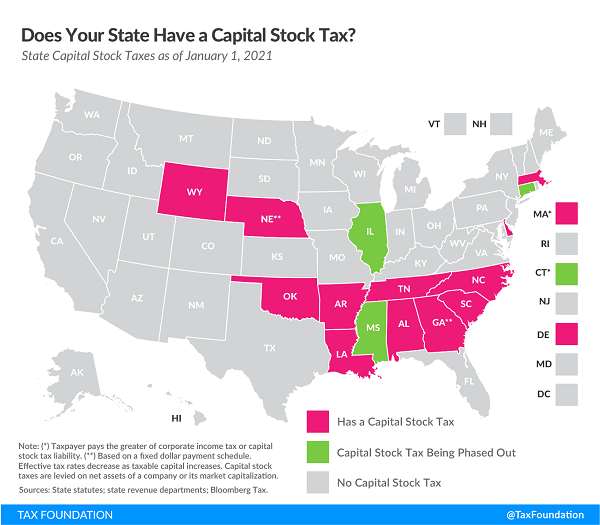 Enacting good tax policy is hard under the best of circumstances. President Biden made it immeasurably harder, if not impossible, by promising to spare everyone earning less than $400,000—more than 95 percent of Americans—from any tax increases. By placing almost three-quarters of the income tax base off limits, the pledge could hamstring the President's ambitious domestic agenda. Drawing any red lines about future tax changes is a terrible idea, whether it is Republicans promising no new taxes on anyone ever or Democrats vowing not to raise taxes on those making less than some arbitrary amount.

Biden’s tax pledge makes substantial deficit reduction nearly impossible. It will make it much harder for Congress to raise revenue to pay for his infrastructure plan. Already it seems to have eliminated consideration of a gas tax hike—the rare tax increase that has some bipartisan backing—because, yes, people making less than $400,000 would pay more at the pump.

Unstated here, but implied, is that it isn't possible to pay for an ambitious spending agenda with only taxes from high earners.

Interview: Breaking Down the American Rescue Plan Act - David Stewart, Martin Sullivan, and Tynisa Gaines, Tax Notes Opinions. "Just to give you an idea of the order of magnitude, this bill was $1.9 trillion, which is about 8.5 percent of GDP. What does that mean? If every man, woman, and child in the United States got a check from the U.S. government, that check could be $5,500. It would be $5,500 for every American."

Using Bitcoin to buy a Tesla? Get ready to hear from the IRS - Olivia Raimonde and Vildana Hajric, Accounting Today. "That’s because cashing in the digital asset for a shiny, new Tesla will count as realizing a capital gain."

All the waffles! Earlier this month we observed National Oatmeal Nut Waffles Day. That was just a warm-up for the big kahuna, which is today's International Waffle Day! Whether you go for a Dutch stroopwafel with ice cream or a delicious breakfast waffle with the wonderful built-in trays to hold more butter and maple syrup, today is your day, waffle lovers!