Taxpayers should note that the form of payment for the third EIP may be different than earlier stimulus payments. More people are receiving direct deposits, while those receiving them in the mail may get either a paper check or an EIP Card – which may be different than how they received their previous stimulus payments. IRS and the Treasury Department urge eligible people who have not received a direct deposit to watch their mail carefully during this period.

Paper checks will arrive by mail in a white envelope from the U.S. Department of the Treasury. For those taxpayers who received their tax refund by mail, this paper check will look similar, but will be labeled as an "Economic Impact Payment" in the memo field (image via IRS):

The EIP Card will also come in a white envelope prominently displaying the seal of the U.S. Department of the Treasury. The card has the Visa name on the front and the issuing bank, MetaBank, N.A. on the back (image via IRS): 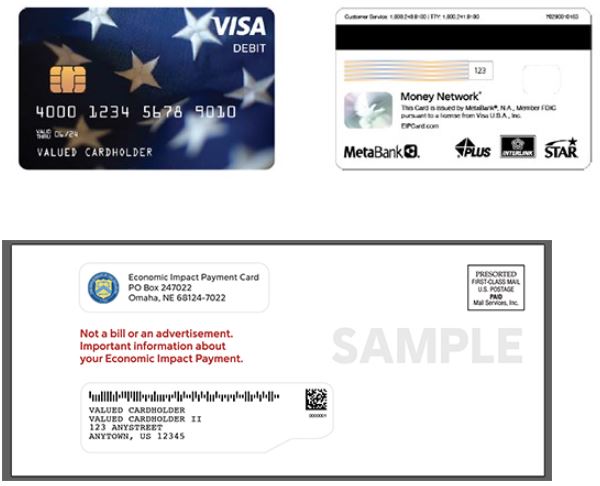 Some taxpayers threw away the debit cards from the first round of stimulus as junk mail, so be careful.

NCCPAP pointed to several problems with Rettig’s statement. “First, estimated tax payments are not made by just the wealthy,” the group wrote. “Any individual who is a small-business owner is most likely going to have to make estimated tax payments during the year to cover their potential tax liability. Not all business owners are wealthy. Most actually fall into the lower and middle classes.”

NCCPAP also noted that for most taxpayers who need to make estimated tax payments during the year, the determination of what their estimated tax payments should initially be is done at the time that their tax returns are being prepared. Allowing the tax return to be filed in May but still requiring the first estimate to be paid in April doesn’t help the taxpayer or tax preparer. “Instead, it leaves them in the same position that they were in prior to the announcement — having to get the work done in time for the April 15 due date,” said the group.

On the other hand, Uber and Lyft drivers and other gig economy workers now can revel in their new-found wealth.

Joe Kristan, a tax partner with Eide Bailly LLP, noted that since states typically start with federal income tax numbers for their own calculations, having the dates align is important.

"It would be very awkward not to do it," Kristan said, adding that he spoke only for himself.

However, he said he was disappointed that the IRS chose to extend only the date for filing personal income tax returns and not the date for filing estimated quarterly returns. That remains April 15 for federal purposes and thus for state purposes — states making announcements Thursday specified that first-quarter estimated payments are still due next month.

"When you consider that most people base their estimated tax payments on prior tax, and you're asking them determine a payment without having done their prior year's tax yet … that's illogical," Kristan said.

Who's left? The states that have yet to roll back income tax filing deadlines in tandem with the federal rollback of the 1040 deadline to April 15 now by my cound includ only Arizona, Hawaii, Idaho, Iowa, Mississippi and Ohio.

IRS to automatically issue refunds on tax-free unemployment to eligible early filers - Kay Bell, Don't Mess With Taxes. "The IRS promise of automatic employment-related refunds means that many recipients of unemployment benefits who have already filed their 2020 tax returns won't have to go to the added hassle of filing an amended return to get back their now-overpaid tax money."

Commissioner Rettig, Come Clean and Stop the B.S. - Russ Fox, Taxable Talk. "Commissioner Rettig today said he is 'hopeful to get through the backlog by summer,' and that there’s a 24 million return backlog of business and individuals per TIGTA.  And he said that the IRS always has a backlog.  But I and other tax professionals are seeing paper-filed returns take one year to be processed (and I’ve seen reports of longer).  That’s not normal."

Adopting a Solo 401(k) for 2020 in 2021 - Wolters Kluwer Tax & Accounting Blog. "An overlooked SECURE Act change is that businesses can adopt new qualified plans and make deductible contributions after the close of the tax year. They must act before the due date for filing the employer’s return (including extensions)."

What is a Solo 401(k)? "A solo 401(k) plan is a one-participant traditional 401(k) plan covering a business owner with no employees." This often can lead to larger retirement plan deductions than would be available from a SEP-IRA.

Taking time to set up a Solo 401(k) plan can be a great reason to extend a return.

The American Rescue Plan Makes Student Loan Forgiveness Tax-Free - Gordon McNamee, TaxBuzz. "Under the ARP, from 2021 through the end of 2025, the full or partial discharge of student loan debt for eligible loans will not be viewed as taxable income."

If a parent funds an IRA for a newly-employed adult child, this can be a great tax savings trick.

Lesson From The Tax Court: S Corp Payments To Sole Shareholder Were Wages - Bryan Camp, TaxProf Blog. "But, c’mon.  It was her own law firm!  Ms. Ward was the captain of her ship.  The big skipper.  The sensei of her dojo. The star of her production.  Call it what you will, it is hard (to the point of impossible) to argue that in practicing law she was not performing services for her wholly-owned S corp. law firm.  You can take that lesson to heart."

Which States Are Taxing Forgiven PPP Loans? - Katherinee Loughead, Tax Policy Blog. "Many states, however, remain on track to tax them by either treating forgiven loans as taxable income, denying the deduction for expenses paid for using forgiven loans, or both. The map and table below show states’ tax treatment of forgiven PPP loans." 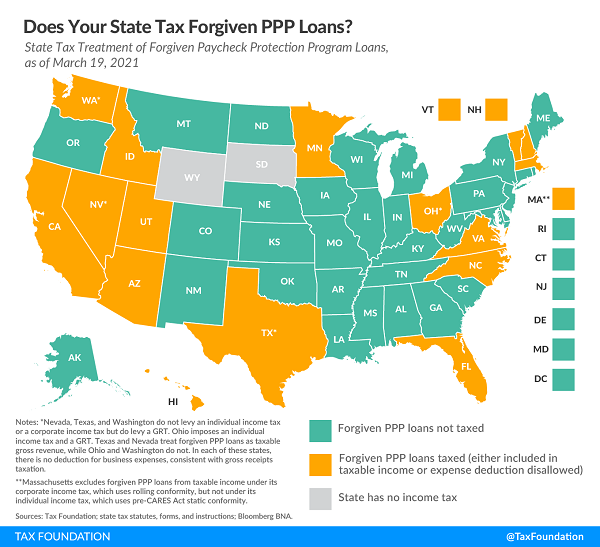 Digital Services Taxes May Be Difficult to Remove - Nana Ama Sarfo, Tax Notes Opinions. "While it is expected that countries will repeal their DSTs after the OECD formalizes a solution, current and proposed DST regimes highlight just how difficult and perhaps delicate that unwinding will be."

Former Child Star, Real Housewife Fights Tax Deficiency - Frederic Lee, Tax Notes. "Kim Richards of movie and reality television fame petitioned the Tax Court to dispute nearly $250,000 in income taxes and penalties owed for tax year 2015...The tax year at issue, 2015, was the final year in which Richards appeared as a series regular on The Real Housewives of Beverly Hills along with her sister, Kyle Richards Umansky, and others."

Adorable! Today is National Puppy Day! Be sure to give your good boy or girl an extra tummy rub today.