May 17 is the New April 15. Sort of, sideways. The IRS yesterday announced that the deadline for filing or extending individual returns has been pushed back until May 17. But this is a limited offer:

While better than nothing, the result is likely to be more confusion for taxpayers and preparers, and more pressure for the IRS to align the deadlines.

The failure to align the first quarter 2021 estimated tax due date with the 2021 filing deadline in particular threatens to undermine the usefulness of the 1040 deadline move. The most common "safe harbor" for computing estimated tax payments is to base them on prior year tax. That's a problem when the prior year tax has yet to be determined.

The IRS Commissioner is scheduled to testify before the House Ways and Means Committee today. These issues may come up.

Meanwhile, eyes turn to state tax agencies to see whether they adjust their due dates to conform to the federal changes.

The American Institute of Certified Public Accountants, which had requested that the deadlines be pushed back, said the decision not to postpone the due date for estimated tax payments would mean that millions of small business owners who owe estimated taxes, as well as trusts and corporations, would not benefit from the relief.

"While we appreciate the IRS' recognition that a filing deadline postponement is indeed necessary, the announcement is far too selective in who is receiving relief," AICPA president and CEO Barry Melancon said in a statement.

Income Tax Due Date Goes To May 17 - Peter Reilly, Forbes ($). "All in I think my friends on #TaxTwitter will not be pleased about first quarter estimates not being in line with the balance due."

IRS delays tax deadline until May 17 - Michael Cohn, Accounting Today.IRS delays tax deadline until May 17 - Michael Cohn, Accounting Today. "Taxpayers won’t need to file any forms or call the IRS to qualify for the automatic federal tax filing and payment relief. Individuals who need extra time to file beyond the May 17 deadline can ask for a filing extension until Oct. 15 by filing Form 4868 through their tax preparer or DIY tax prep software, or by using the Free File link on IRS.gov. Filing Form 4868 gives taxpayers until Oct. 15 to file their 2020 tax return but doesn’t provide an extension of time to pay any taxes that due."

Tax Return Filing Extension Receives Widespread Approval - William Hoffman, Tax Notes. "The IRS extended the 2021 tax return filing and payment deadlines from April 15 to May 17, to the cheers of lawmakers and some hesitant thumbs-up among tax professionals."

IRS Postpones Individual Filing and Payment Deadline to May 17 - Kristine Tidgren, Ag Docket. "The announcement ends speculation that has been swirling since the filing season began."

Individual Tax Return and Payment Due Date Pushed Back One Month to May 17, 2021 - But Not the Date to Pay the First 2021 Estimate - Ed Zollars, Current Federal Tax Developments. "Finally, there’s a reasonable chance that more relief might be forthcoming.  Last year the IRS started by offering narrow relief that kept expanding as we got closer to April 15. Thus, it’s not out of the question that estates, trusts and calendar year C corporations might be offered the same relief as we get closer to April 15.  As well, the IRS likely will get numerous comments requesting that the estimated tax due date for individuals be pushed back a month as well."

More Filing Time, More Taxes - Renu Zaretsky, Daily Deduction. "State tax administrators and online tax prep firms such Intuit wanted the IRS to stick to April 15 but the IRS already has a backlog of 24 million returns that have yet to be processed. IRS Commissioner Charles Rettig will clarify it all in testimony to the House Ways & Means Committee’s Oversight subcommittee today."

IRS Extends Tax Return Due Date From April 15 To May 17 - Robert Wood, Forbes ($). "Of course, many people won’t be ready by May 17 either, but you can now make the decision later whether to file on time (by May 17) or to extend until October. Apart from the pandemic, there are some new law changes and many other reasons that have caused this tax filing season—like last year—to be difficult."

90 million COVID relief checks delivered. How to find your EIP's status - Kay Bell, Don't Mess With Taxes. "If you're among those waiting for your COVID-19 cash, the IRS asks that you be patient. It is still catching up on previously filed taxes and returns sent this year while working on distribution the EIP3 amounts... Rather than sit and sulk, you can try to find out where in the IRS system your COVID-19 rebate is by using the agency's online Get My Payment tool."

Phasing out the inheritance tax would reduce Iowa's general fund revenue by an estimated $17.9 million in its first year, before ramping up to $102.3 million in its sixth year, for a total of about $416.6 million over six years, according to an analysis by the nonpartisan Legislative Services Agency.

The unanimous vote would indicate likely passage, but a provision in the recently-passed "Rescue" bill may complicate things. A provision in the bill appears to prevent states from enacting tax cuts. The Iowa bill could put the Rescue Act payments to Iowa at risk.

While states will be able to use the aid to cover budget deficits, the act contains a provision that restricts it from being used to “either directly or indirectly offset a reduction in the net tax revenue of such state or territory resulting from a change in law, regulation, or administrative interpretation during the covered period that reduces any tax (by providing for a reduction in a rate, a rebate, a deduction, a credit, or otherwise) or delays the imposition of any tax or tax increase.”

Illinois lawmakers are proposing to increase the estate tax to fund expanded disability benefits, but opponents say that may cause the state's wealthiest earners to flee.

H.B. 3920, introduced by Rep. Barbara Hernandez (D), would levy an additional 5 percent tax on estates worth $4 million or more and use the revenue to fund a monthly supplemental payment of $279 to residents who already receive federal Supplemental Security Income (SSI) grants.

Illinois DOR Advises Filing Pause for 2020 Unemployment Beneficiaries - Illinois Department of Revenue via Tax Analysts. "IDOR strongly urges taxpayers who fall in this category to not file returns related to these changes at this time. Additionally, taxpayers who received unemployment benefits last year and have already filed their 2020 tax return should not file an amended return at this time."

3 Questions State Tax Pros Have About The Pandemic Relief Law - Maria Koklanaris, Law360 Tax Authority. "One of the notable state and local tax aspects about the ARPA is something that is not in it. There is no mention of the $10,000 cap on the deduction for state and local taxes paid that was a centerpiece of the 2017 federal tax overhaul."

Does Your State Tax Business Inventory? - Janelle Cammenga, Tax Policy Blog. "Inventory taxes fall under the umbrella of the property tax, which is the largest tax paid by businesses at the state and local levels. In addition to taxes on the value of buildings and land, businesses can also pay property taxes on their machinery and equipment, known as business tangible personal property (TPP) taxes. A number of states include inventory as part of their tangible personal property tax."4 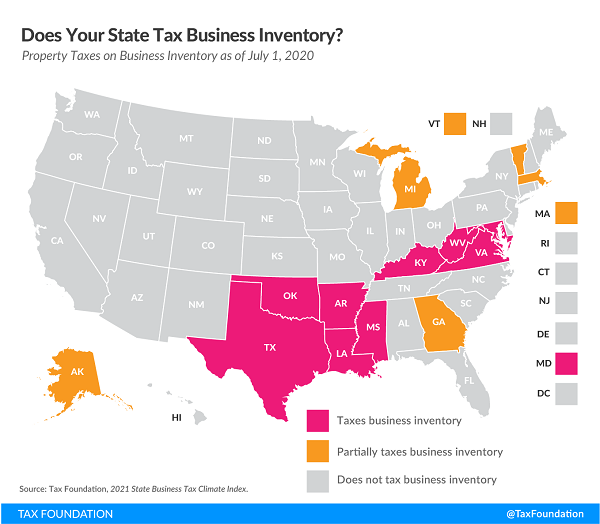 Information Reporting Comes to Gig Economy Participants — Now What? - Marie Sapirie, Tax Notes Opinions. "he days of widespread underreporting of income from online platform work are coming to a close, but the tax challenges for individual participants in the platform-based economy and the IRS are far from over. Many more gig economy workers will start receiving tax information reporting from the digital platforms they use than before because of a provision in the American Rescue Plan Act of 2021 (P.L. 117-2). The result is expected to be increased income reporting and payment by those participants. The next hurdle will be ensuring that they pay the right amount of tax on their earnings, and that problem won’t be quite as easily solved."

The Child Tax Credit Grows Up to Lift Millions of Children Out of Poverty - Elaine Maag and Nikhita Airi, TaxVox. "Over 90 percent of all families with children will receive an average benefit of $4,380, according to the Tax Policy Center. And the lowest income families will receive average benefits on par with middle- and high-income families, a departure from how the credit used to work."

“Anybody making more than $400,000 will see a small to a significant tax increase,” President Biden said during an ABC News interview that aired March 17. He also said he envisioned raising the corporate rate from 21 percent to 28 percent — a change that he claimed would raise $800 billion — and raising the top individual income tax rate to 39.6 percent...

Asked how he anticipates getting Republican senators to vote to raise taxes to overcome the filibuster threat in the Senate, Biden acknowledged he might not be able to. However, he insisted he could unify Democrats around the issue and said he would support efforts to bring back the traditional filibuster, one in which a senator “had to stand up and command the floor.”

Stretched to Its Breaking Point, the IRS Needs Multiyear, Sustained Funding to Efficiently Administer the Tax Laws and Provide Quality Service for Taxpayers - National Taxpayer Advocate Blog. "The reduction in the IRS’s budget and, ultimately, its staffing not only affects enforcement and the collection of revenue, it also affects the IRS’s ability to provide top-notch customer service. In FY 2020, the IRS received 100.5 million telephone calls but due to budget and staffing constraints, its employees answered only 24 percent of those calls, with hold times averaging 18 minutes. Put diﬀerently, IRS employees did not answer more than 75 million telephone calls from taxpayers seeking help in complying with their tax obligations."

Some of us celebrate this every day. Today is National Awkward Moments Day! IRS Commissioner Rettig will observe the day explaining yesterday's deadline rollback to Congress. Celebrate in your own way.