Congress Approves $1.9 Trillion COVID-19 Rescue Bill - Jay Heflin and Mel Schwarz, Eide Bailly. "The Employee Retention Credit  is extended through the end of 2021 and expanded to startup firms that opened a trade or business after February 15, 2020, with average annual gross receipts that do not exceed $1 million."

Democrats also included in the bill a reduction to the threshold for when third-party payment processors must report information to the IRS. Under current law, companies like eBay and Airbnb must report when people are paid more than $20,000 over at least 200 transactions. The language in the bill would drop that threshold to $600 to capture more of the money earned by independent contractors in so-called gig economy jobs. The move would raise $8.4 billion over 10 years, according to the Joint Committee on Taxation.

Tax-free unemployment change could require amended tax return filings - Kay Bell, Don't Mess With Taxes. "After the bill is officially the law, the Internal Revenue Service is likely to issue guidance as to what early filers should do if they are affected by law changes in the American Rescue Plan. For many, that likely will mean submitting an amended return."

Even if you will get a refund, it would be best to await the guidance. There may be a streamlined filing, or the IRS may find a way to identify affected returns and send the refunds without amending.

Schedule C Filers Can Use Gross Income to Calculate New PPP Loans - Kristine Tidgren, Ag. Docket. "The new rule provides Schedule C filers with an option to use either net or gross Schedule C income for determining the owner compensation portion of their loan amount."

Georgia man gets 2 years after stealing University of Iowa employees' identities - Trish Mahaffey, The Gazette. "The fraudsters committed wire and mail fraud by using the stolen identities to apply for both state and federal income tax returns and provided debit card account numbers to the IRS, so fraudulent refunds could be loaded on the cards by wire transfers, according to court documents."

Identity Protection PIN Can Protect You From Tax-Related Identity Theft - National Taxpayer Advocate Blog. "I am pleased to share the news that the IRS has recently opened up enrollment in the IP PIN program nationwide to anyone who has an SSN or Individual Taxpayer Identification Number (ITIN). A taxpayer who is able to verify his or her identity may now voluntarily opt into the IP PIN program as a proactive way to protect against tax-related identity theft."

Make protecting tax and financial information a habit - IRS. "As a reminder, the IRS doesn't initiate contact with taxpayers by email, text messages or social media channels to request personal or financial information. Generally, the IRS first mails a paper bill to a person who owes taxes. In some special situations, the IRS will call or come to a home or business."

Avoid phishing scams. The easiest way for criminals to steal sensitive data is simply to ask for it. IRS urges people to learn to recognize phishing emails, calls or texts that pose as familiar organizations such as banks, credit card companies or even the IRS. Keep sensitive data safe and:

Selling Farm Business Assets – Special Tax Treatment (Part One) - Roger McEowen, Agricultural Law and Taxation Blog. "In general, gains and losses arising from the sale of farmland, depreciable assets used in the farm business, draft, breeding, dairy and sporting livestock, unharvested crops sold with the land, and some other transactions receive a special form of tax treatment.  This is a very advantageous tax treatment for farmers and ranchers.  The section of the Internal Revenue Code involved is I.R.C. §1231, and assets that receive this special tax treatment are known as 'Section 1231' assets."

States Expected Covid-19 to Bring Widespread Tax Shortfalls. It Didn’t Happen. - Heather Gillers and Peter Santilli, Wall Street Journal ($). "Analysts still expect states to confront budget gaps as the pandemic enters its second year, but they are projecting smaller shortfalls partially filled in with federal aid. A Democratic-led Congress is now debating another massive round of federal aid, amid objections from Republicans."

The bill would also eliminate Iowa's deduction for federal taxes paid. The net result will be a higher effective rate for many taxpayers in Iowa's top bracket, which will begin at $75,000 of taxable income.

Does the American Rescue Plan Ban State Tax Cuts? - Jared Walczak, Tax Policy Blog. "Senate amendments to the American Rescue Plan Act prohibit using any of the $350 billion in State and Local Fiscal Recovery Funds to cut taxes, but many are concerned that states which accept the funds could be prohibited from implementing tax cuts between now and 2024—an astonishing level of federal interference in states’ fiscal affairs. Is this alarm warranted? It’s complicated, but state policymakers have reason to be concerned."

Montana Mails 2019 Delinquency Notices for S Corporations, Partnerships - Montana Department of Revenue via Tax Analysts. "We recently mailed delinquency letters to S corporations and partnerships who have an open account with us and have not filed their 2018 Montana tax return... Entities that did not have any Montana activity for the tax year in question should file the Affidavit of Inactivity for Corporations, Partnerships, and Disregarded Entities (Form INA-CT) to report that they were not actively engaged in business during the tax year."

Does Your State Have a Gross Receipts Tax? - Janelle Cammenga, Tax Policy Blog. "Today’s map looks at which states levy a gross receipts tax, which is often considered one of the most economically damaging taxes." 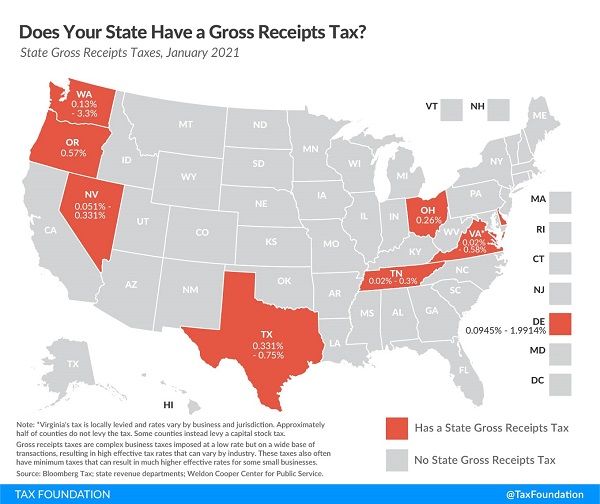 Are State and Local Tax Systems Colorblind? - Aravind Boddupalli and Kim Rueben, TaxVox. "We find that racial disparities are accentuated in some states with large Black populations by their governments’ reliance on regressive taxes. In other states, racial disparities are narrowed through progressive income taxes and property taxes."

Donating appreciated property? Dot every "i." The death of his mother left a Wisconsin attorney with the task of sorting out his mother's possessions that he inherited. After talking to a company that handles estate sales, he chose to donate much of the property to charity. The IRS disallowed the resulting charitable deductions, assessing over $50,000 in taxes and $7,000 in penalties after disallowing the taxpayer's donations.

Donating appreciated property charity can provide a nice tax break - you get to deduct the fair market value of the donated property. But the tax law is very picky about what you have to report on your tax returns if you donate property (other than traded securities) valued over $5,000. The tax law also imposes recordkeeping requirements. If any donation exceeds $250, you need a receipt from the charity with specific information.

That led to a problem, as Tax Court Judge Nega explains:

On the record before us, petitioner's purported noncash charitable contributions for tax years 2012, 2013, and 2015 included items valued at $250 or more. Such contributions must be substantiated by a “contemporaneous written acknowledgment” (CWA) from the donee. Sec. 170(f)(8)(A)... Although petitioner contends that he donated to Goodwill and the Salvation Army during the years at issue, he did not obtain a CWA from Goodwill for 2012 or from the Salvation Army for any of the years at issue. The receipts that petitioner submitted during and after the examination periods for the years at issue did not describe in detail the items of property donated. Accordingly, petitioner did not strictly comply with the substantiation requirements for donations of property valued in excess of $250.

There were other problems. A "qualified appraisal" for deductions over $5,000 has to be included with a Form 8283 for most property contributed at a value over $5,000. Appraisals were obtained, but they fell short, according to Judge Nega:

The taxpayer argued that the compliance was close enough. The judge disagreed:

The Forms 8283 that petitioner submitted with his returns were almost entirely incomplete and lacked signatures from the donor, the donee, and the appraiser. Petitioner did not otherwise provide reliable written records credibly identifying the individual items donated, their values or condition, the manner of acquisition, the donation dates, or his bases in the property. The updated Forms 8283 that petitioner submitted to the Office of Appeals were untimely and left Section A entirely incomplete and Section B partially incomplete and without a signature from the donee. Thus, petitioner failed to provide “most of the information required” for us to evaluate whether he made the alleged charitable contributions.

The moral? You have to be very careful how you file your return when you are claiming a deduction for donated personal property or real estate. If you don't do it right, your deduction goes to zero. The tax regulations and Form 8283 spell out exactly what sort of appraisal is needed, and when it has to be received. This information has to be ready before you file. If you need to extend to get it right, it's worth it. It's better to wait longer for a refund by extending than to file in haste and lose it altogether.