Democratic negotiations with centrist Sen. Joe Manchin (D-W.Va.) over President Biden’s sweeping climate and social spending bill are close to melting down as Manchin appears to be backing out of an earlier deal with the White House to extend the child tax credit for one year.

Manchin is now floating the idea of extending the child tax credit for multiple years so that the cost of a proposal that is likely to be extended by Congress in the future is fully reflected in the Build Back Better bill, which is now officially projected to cost roughly $2 trillion over 10 years.

A push by Senate Democrats to pass a roughly $2 trillion tax-and-spending measure before Christmas appeared in dire political peril Wednesday, as talks soured between President Biden and Sen. Joe Manchin III (D-W.Va.) over the size and scope of the economic package.

A longtime holdout on the package, Manchin for months has maintained concerns that Democrats are spending too much, and too quickly, potentially compounding the risks of inflation at a time when prices are rising at a rapid clip. He successfully negotiated down the party’s original package from its initial $3.5 trillion price tag earlier this year, frustrating liberal lawmakers in the process.

But the senator never endorsed the roughly $2 trillion legislation that emerged from the House, a proposal that aims to expand Medicare, authorize universal prekindergarten, invest new sums to combat climate change and expand federal safety net programs. Instead, Manchin over the past two weeks has intensified his criticisms about inflation and repeated his desire that Democrats hit pause on the process.

“They are far apart,” the person familiar with the talks between Messrs. Biden and Manchin said.

Without a quick resolution to the debate, the monthly child tax credit payments that started in July are set to lapse. The final monthly payments of the expanded child tax credit authorized under current law hit bank accounts Wednesday.

Democratic talks with Manchin show signs of melting down - Alexander Bolton, The Hill:

Extending the expanded child tax credit a full ten years would cost $1.6 trillion over a 10-year budget window, according to the Tax Foundation, which would nearly equal the entire cost of Build Back Better as it was drafted by the House. Other estimates have pegged the cost of 10-year expansion of the child tax credit at $1.4 trillion.

The source added “there is no way” the legislation can pass before Christmas, as Democrats planned, because of the dispute with Manchin on the child tax credit as well as an intra-party fight over raising the cap on state and local tax (SALT) deductions.

Child credit backers look to workarounds if budget bill stalls - Laura Weiss, Roll Call. "The child tax credit expansion is one of the key selling points in Democrats' $2.2 trillion budget reconciliation package, which is in danger of getting put on ice until January at the earliest due to lingering disagreements and procedural obstacles."

Tax Pros Parse IRS Advice on BBA Imputed Underpayments - Kristen Parillo, Tax Notes ($). First, some background. The 2015 Bipartisan Budget Act (BBA) created a news system where partnerships can be directly assessed tax if the IRS adjusts "partnership items" in an audit. The IRS is asserting that adjustments to items other than income and deduction items can trigger an assessment. Examples of such items could include partner liability allocations and capital account computations.

Roughly 20 states allow S corporations, partnerships and limited liability companies to be taxed at the entity level with offsetting credits or exclusions for members' share of the tax, but questions remain about how credits for taxes paid to other states will operate, said Steven Wlodychak, a former principal at EY. He was speaking on a panel at New York University's 40th Institute on State and Local Taxation, held online.

Whether a state will provide a credit for entity-level taxes or other business taxes that multistate entities pay in other states is a key consideration for taxpayers that choose to be taxed at the entity level to bypass the $10,000 SALT cap, Wlodychak said. If states don't credit an entity for certain taxes paid, that could result in tax liabilities that outstrip the benefits of the higher federal tax deduction, he said.

This has been an underappreciated issue in this year's tax planning. The potential collapse of BBB and its increase in the SALT cap makes the issue more pressing.

Michigan's House and Senate, in near-unanimous votes Tuesday, passed H.B. 5376, which would provide an optional entity-level tax that S corporations, partnerships and limited liability companies could pay, with members then taking state income tax credits on their share of the tax.

The bill, sponsored by Rep. Mark Tisdel, R-Rochester Hills, heads next to Gov. Gretchen Whitmer for her expected signature. That would make Michigan the latest of about 20 states to pass laws allowing pass-throughs to sidestep the $10,000 cap.

The bill, if signed by the Michigan governor, will be effective for 2021. "

Under the bill, pass-through entities could choose to pay an income tax of 4.25%, the same as the current state personal income tax rate, with members then taking the credits on their shares.

2022 State Business Tax Climate Index - Janelle Cammenga and Jared Walczak, Tax Policy Blog. "The Tax Foundation’s State Business Tax Climate Index enables business leaders, government policymakers, and taxpayers to gauge how their states’ tax systems compare. While there are many ways to show how much is collected in taxes by state governments, the Index is designed to show how well states structure their tax systems and provides a road map for improvement."

The ranking of states with Eide Bailly offices: 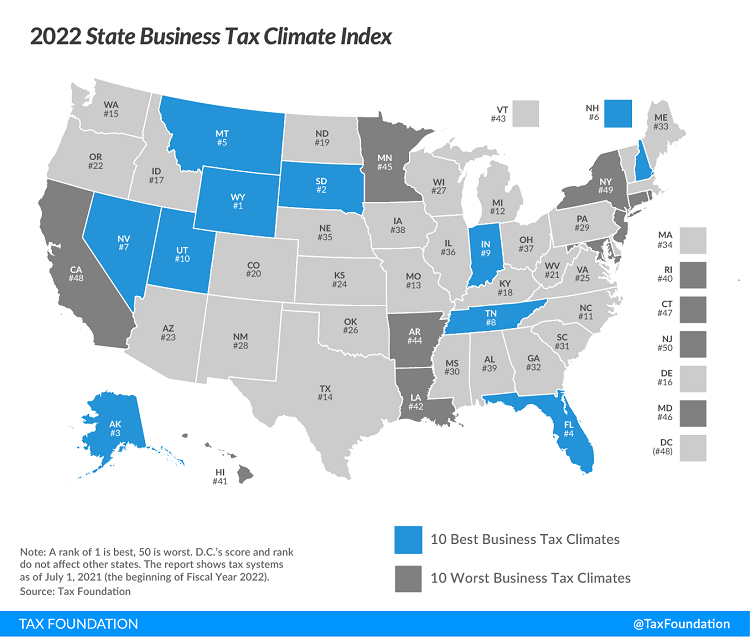 Seven Low-Key Year-End Tax Moves to Make in 2021 - Kelly Phillips Erb, Bloomberg. "I get it: We’re all tired. But tax planning doesn’t have to be time-consuming or complicated. Sometimes, it can be a simple adjustment or a quick glance at your accounts to make sure you’re on track. That’s what you really want, right?"

You got your last 2021 Advance Child Tax Credit payment. Now what? - Kay Bell, Don't Mess With Taxes. "Taxpayers who got AdvCTC amounts will have to reconcile those payments with any more credit they are due (or owe) when they file their 2021 taxes next year. To help them do that, the IRS will send all AdvCTC recipients a special notice, Letter 6419, in January. It will show the total amount of advance Child Tax Credit payments that were disbursed to during 2021."

Poor Recordkeeping Dooms Debtors’ Tax Basis and Insolvency Claims -Chandra Wallace, Tax Notes ($). "Because the debtors hadn’t maintained records showing the timing and amounts of their personal contributions to the company, the bankruptcy court found they had failed to meet their burden of proof. Although Mark Kelly contended that he provided the IRS with enough records 'to fill a pallet,' the court wrote, those records didn’t include complete statements for several financial accounts belonging to the Kellys and to their various businesses."

New York City Facing Auditor Shortage, Practitioner Says - Tax Notes. "New York City is facing a shortage of auditors as the city digs its heels in on a five-days-a-week in-office policy for its employees, according to a local tax practitioner."

Nominations Due for 2021 Tax Offender of the Year! - Russ Fox, Taxable Talk. It's a tough competition, but it's a dishonor just to be nominated.

Got this covered. Today is National Chocolate Covered Anything Day. You know what to do.