The estate tax changes that were anticipated in the final months of 2021 are apparently not materializing, leaving some people scratching their heads as to what they should do next.

If you are in the midst of creating and funding your trust, go ahead and complete your gift. First, the BBB bill is not signed yet. It could potentially be signed in a different form where the proposed revisions are brought back in. Second, the federal estate tax exemption amount is still dropping on January 1, 2026 from $11 million to $5 million (adjusted for inflation). That is only four years away and Congress could still make changes to the estate tax laws in interim.

While the estate planning done in anticipation of now-abandoned tax changes is not wasted, a lot of estate planning pros would have liked to know ahead of time that the proposed changes wouldn't pass. As one attorney told me when the changes fell out of the bill, "Where do I go to get the last 12 Sundays back?"

Pandemic Could Send Car Dealers Back to the Future - Nathan Richman, Tax Notes:

Supply chain problems linked to the COVID-19 pandemic are depleting last-in, first-out inventories and forcing some car dealerships to use purchase prices from the 1980s for cost offsets of current sales.

Those inventory levels aren’t expected to recover substantially before the end of 2021, so dealers face the prospects of paying more in taxes because they have to reach back in their books and find only lower-priced purchases, which offset less of the cost of their sales than would current inventory purchases.

Related: Is LIFO Still the Right Answer for Dealerships?

BBB: It’s already been two weeks since the House passed the $1.7 trillion Build Back Better Act, and so far, not much has occurred in the Senate. Part of the delay was the Thanksgiving recess. But the Senate parliamentarian hasn’t even ruled officially on all the provisions in the House bill yet, so no one knows what’s in or out at this point. Sen. Joe Manchin (D-W.Va.) is insisting he won’t back a paid leave provision backed by progressives, and Democrats are fighting among themselves over the state-and-local tax (SALT) deduction.

Schumer has declared repeatedly that he wants BBB through the Senate by Christmas. But as one senator joked with us yesterday, “Chuck didn’t say which Christmas.”

“SALT” deduction proponent Sen. Bob Menendez, D-N.J., and critic Sen. Bernie Sanders, I-Vt., have been working on a plan to extend the cap past its 2025 expiration and add an income-based exemption. But their efforts hit a snag this week over disagreement on the income level at which limits should begin, and over whether it should generate revenue to fund other priorities in the social safety net and climate package.

Another stumbling block to SALT plans could come from Sen. Joe Manchin III’s suggestions that Democrats slow down their work to pass the reconciliation bill as a whole, which could make it more difficult to begin any changes to the cap in the 2021 tax year. Schumer has set a Christmas deadline for passing the filibuster-proof package, but he’ll need support from the West Virginia centrist to do so.

House Ways and Means Committee Democrats coming out of their weekly caucus meeting December 1 seemed to think it might just take a Christmas miracle for the Senate to act before the holiday on their party’s marquee tax bill.

One item of interest in Iowa:

For at least the last four Congresses, [Ron Kind, D-Wis] has been trying to expand the investment tax credit to help defray the costs of addressing the manure problems on large animal feedlots.

The crux of Kind’s latest bill made it into the reconciliation measure that passed the House November 20 and Kind, who is retiring next year after 13 terms, wants to keep it there.

The provision makes methane digesters, which decompose manure into a biogas, eligible for the ITC’s 6 percent base credit rate or a 30 percent bonus credit rate through the end of 2026.

The provision requires the resulting biogas to be at least 52 percent methane, capturing the greenhouse gas for sale rather than burning it off while also cutting down on the dangers of waste ponds leeching into water tables.

Another sticking point has been an extra bonus in the bill’s tax credits for purchasing electric vehicles that would only apply to cars and trucks produced by unionized American workers. Other countries have raised objections to those provisions on the basis of international trade agreements and foreign automakers with nonunionized U.S. operations have complained that they aren’t fair.

Manchin expressed opposition to those bonus credits last month, describing them as “wrong” and “not American.”

The Internal Revenue Service could add 25,000 positions in the next 18 months if Congress comes through with the money needed to expand the workforce, Commissioner Chuck Rettig said Wednesday.

In a speech in Austin, Texas, The IRS Commissioner gave insight of who he wants to hire, and how he plans to get them:

Rettig also reiterated plans for hiring in three groups: recent college and graduate school graduates and individuals with less than five years of experience; people age 35 to 45; and more experienced staff that would coach the other two groups, he said.

Rettig also said the agency is partnering with both a four-year university and a two-year school to create what he called "our own pipeline for job skills," without providing further details on the institutions.

Cigarette Taxes and Cigarette Smuggling by State, 2019 - Ulrik Boesen, Tax Policy Blog. "A consequence of high state cigarette excise tax rates has been increased smuggling as people procure discounted packs from low-tax states and sell them in high-tax states. Growing cigarette tax differentials have made cigarette smuggling both a national problem and, in some cases, a lucrative criminal enterprise."

Over 1/3 of the cigarettes consumed in Minnesota are smuggled, according to the story. In New York, over half the smokes are illicit. 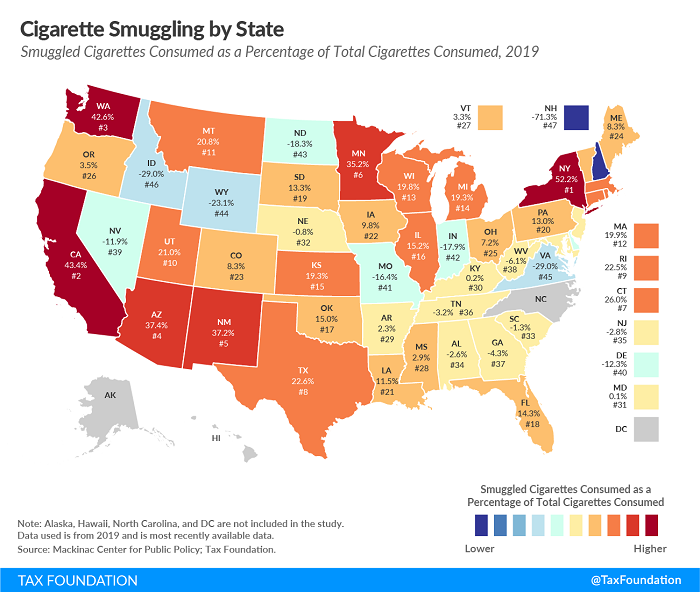 6 tax moves to make in December 2021 - Kay Bell, Don't Mess With Taxes. "Just remember that in most cases, the tax tasks must be completed Dec. 31 in order to provide any benefit on your 2021 tax bill."

Could Tax Incentives Help Recruit and Retain Teachers? - Renu Zaretsky, TaxVox. "In other words, taxpayers and lawmakers need to think beyond tax subsidies. When it comes to public services and the people who provide them, we get what we pay for."

IRS Failure to Process Return Does Not Mean Taxpayer Failed to File A Return - Leslie Book, Procedurally Taxing. "It is all too common for the IRS to fail to process returns that taxpayers submit either electronically or by mail. In Willets v Commissioner, a nonprecedential summary opinion, the Tax Court held that the IRS’s failure to process a return did not equate to the failure to file the return. The legal distinction between processing and filing is significant given that the filing of a return is the jump off point for determining timeliness of assessments and refund claims, and also may determine whether a taxpayer is subject to delinquency penalties."

IRS Criminal Investigation Report Highlights Pandemic Year Work - Kelly Phillips Erb, Bloomberg. "Sometimes, tech and tax crimes collide. This year, for example, CI saw the first-ever sentencing of a Bitcoin case with a tax component. In the case, a former Microsoft employee, Volodymyr Kvashuk, was convicted in a scheme to embezzle over $10 million from the company, using a bitcoin mixer to hide taxable income."

If don't want to be an S corporation, paperwork is important. Owners of a California S corporation tried to check out of having to pick up corporate income on their 1040s, but they forgot to check out before they tried to leave. Tax Court Judge Lauber explains:

Petitioners operated a restaurant in California, which was incorporated in 2010. In 2011 petitioner husband filed with the Internal Revenue Service (IRS or respondent), on behalf of the restaurant, a Form 2553, Election by a Small Business Corporation, by which it elected to be treated as an S corporation, i.e., an entity whose tax treatment would be governed by subchapter S of theInternal Revenue Code (Code). But contrary to the requirements of subchapter S, petitioners did not report results of the restaurant's operations on their 2015 Federal income tax return, and they filed no return for 2016. The IRS determined substantial deficiencies for both years, determining the restaurant's gross income by use of a bank deposits analysis but allowing no deductions for the costs of operating the restaurant. The IRS also determined an accuracy-related penalty under section 6662(a) for 2015 and additions to tax under sections 6651(a)(1) and (2) and 6654 for 2016.

Respondent has moved for summary judgment sustaining the deficiencies, penalty, and additions to tax set forth in the notices of deficiency. Petitioners contend that the restaurant was a C corporation and that this case “has nothing to do with personal income.” We agree with respondent on that point: Because the entity elected to be taxed as an S corporation, its income is passed through to its shareholders and must be reported on their individual tax returns.

Jude Lauber said that the business income most certainly did have something to do with personal income:

Once an entity elects S corporation status, the election is effective “for all succeeding taxable years.”  The election will be terminated if and only if (1) the shareholders make an affirmative revocation, (2) the entity ceases to be a “small business corporation,” or (3) the entity's passive investment income exceeds 25% of its total gross receipts for the previous three years. See sec. 1362(d). Petitioners do not allege that any terminating event occurred during 2015 or 2016 (or previously). They thus have no basis to dispute that YCI was an S corporation during 2015 and 2016. As a shareholder of YCI, petitioner husband is taxed on a pro rata basis.

The Moral? Think before you incorporate. If you do, think before you choose to be an S corporation. And if you change your mind, be sure to let the IRS know.

Be sure to give your very good boy or girl a treat. It's National Mutt Day!