In phone calls, emails and in-person meetings with thousands of business owners, American Express Co. salespeople laid out the strategy. Use AmEx to pay your employees and suppliers, they said. You’ll have to pay a fee, but you’ll come out ahead. That’s because you can earn rewards on the transaction that can be converted into untaxed cash, while also deducting the transaction fees for tax purposes.

Perhaps...not. The IRS cites the most recent IRS guidance on the issue, Announcement 2002-18 (my emphasis):

Consistent with prior practice, the IRS will not assert that any taxpayer has understated his federal tax liability by reason of the receipt or personal use of frequent flyer miles or other in-kind promotional benefits attributable to the taxpayer’s business or official travel. Any future guidance on the taxability of these benefits will be applied prospectively.

The company realized there was a problem, but not everyone got the memo:

No documentation? All right, then.

The IRS expects to provide extensive training on employee retention credits to examiners in early 2022, but an agency official couldn’t predict when audits will begin.

“I can’t even venture a guess, but I can tell you that the training is going to commence in the February-March time period, and then, depending on rollout and completion of that training, audits will begin subsequently,” Julie Foerster of the IRS Small Business/Self-Employed Division said November 19 at the virtual New England IRS Representation Conference.

The Senate is likely to take at least a month to “Build Back Better.” The Senate is start on its version of the Build Back Better (BBB) tax and spending package the House passed on Friday. The Senate is almost certain to make changes. Among the most contentious issues: The fate of the $10,000 cap on the state and local tax (SALT) deduction and a requirement that many employers offer workers four weeks of family and medical leave. White House National Economic Council Director Brian Deese told Fox News yesterday that he’s optimistic that the Senate will pass the bill despite concerns from  moderates.

Accountants and investors said U.S. accounting rules leave companies more room to lower income than inflate it—the usual concern of investors—through a variety of estimates ranging from loan-loss and litigation reserves to accounts-receivable allowances and warranty estimates. That means companies could push results down in order to reduce their exposure to the minimum tax, said Jack Ciesielski, owner of R.G. Associates Inc., an investment research firm and portfolio manager.

And if they could, at least some probably will, said David Zion, head of Zion Research Group, an accounting and tax research firm. Companies likely will emphasize nonstandard financial measures to investors, effectively encouraging the markets to look past their formal results.

A Better Way To Tax Corporations Than The House’s Book Minimum Levy - Howard Gleckman, TaxVox. "Here is one better way: Allow firms to take only, say, 80 percent of the value of their deductions and credits. The idea, which MIT accounting professor Michelle Hanlon suggested on the November 11 episode of TPC’s podcast The Prescription, has multiple benefits over the book tax."

Dems Hope Research Tax Break Can Seal Reconciliation Deal - Alan Ota, Law360 Tax Authority ($). "Several senior Democrats said a bicameral accord on the reconciliation bill was likely to include a plan to continue full expensing of research and development costs through 2025 and delay until 2026 the transition to five-year amortization of such expenses under the 2017 Tax Cuts and Jobs Act."

Democrats Push to Narrow Gaps in Cross-Border Corporate Tax Rates as Biden’s Agenda Advances - Richard Rubin, Wall Steet Journal ($). "The U.S. piece stems from Ms. Yellen’s push for a global floor on tax rates and Sen. Kyrsten Sinema’s (D., Ariz.) insistence on a domestic ceiling on tax rates. This convergence means Democrats are likely to leave the GOP’s 21% corporate tax rate in place and create a system in which U.S. companies pay between 15% and 21% of their earnings in taxes no matter where they put jobs and profits."

The IRS will soon release a list of frequently asked questions and an interim guidance memo for changes in requirements for research credit refund claims, according to an IRS official.

Holly Paz, deputy commissioner of the IRS Large Business and International Division, said November 22 that the IRS understands that tax professionals need more guidance on the section 41 changes, and that the agency is “open to all comments and views.”

Speaking at the American Institute of CPAs’ fall tax division meeting, Paz said the changes were spurred by the poor quality of the claims the IRS was receiving, which were challenging and resource-intensive for the agency.

Related: How R&D Can Help Startups Gain Return on Investment.

Taxpayer Advocate Service Should Double in Size, Collins Says - Benjamin Guggenheim, Tax Notes ($). "Speaking at the American Institute of CPAs’ fall tax division meeting, [National Taxpayer Advocate Karen] Collins pointed out that one of the criteria for incoming cases at TAS is that the taxpayer has experienced long delays with the IRS. She estimated that those taxpayers now number about 160 million."

The U.S. would slot in behind Finland and ahead of Germany. 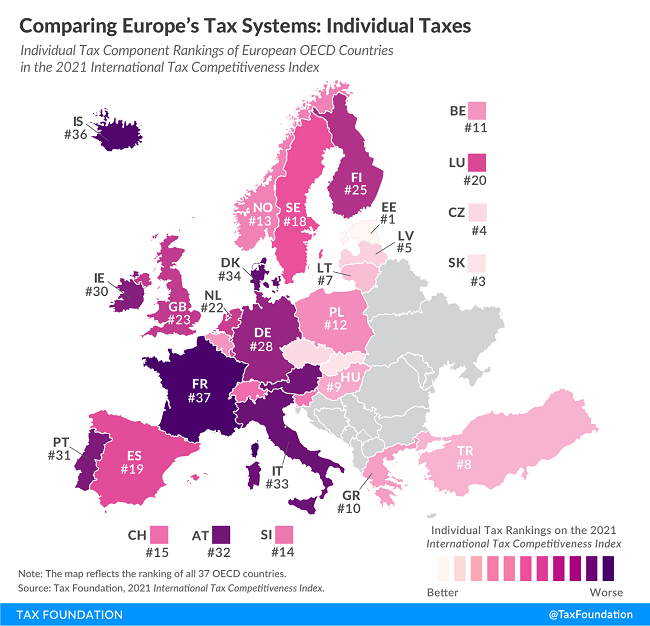 Elon Musk already faces a federal tax bill approaching $2.7 billion on exercising Tesla Inc. stock options. It would have been bigger if the company’s share price hadn’t fallen after he tweeted about selling stock.

At the same time, exercising the options at a lower stock price could weigh on the company he controls. The tax deductions that Tesla can claim for that part of Mr. Musk’s compensation package are effectively reduced if he exercises options at lower share prices.

I respond to a question I was asked yesterday as to whether Rittenhouse’s acquittal absolves him of potential civil liability related to the same conduct for which he was acquitted and specifically address the criminal tax analog of the phenomenon.

So even if the IRS can't put you in jail for tax fraud, they might be able to get you with the 75% civil fraud penalty.

If You Don’t Get Form 1099, Is It Taxable, Will IRS Know? (Hint: ‘If A Tree Falls In The Forest...’) - Robert Wood, Forbes. "Nevertheless, a payor’s failure to issue a Form 1099 alone is not conclusive proof that a payment is not subject to tax. People have tried that argument with the IRS, and even in Tax Court. It hasn’t worked so far."

COVID-19 Fraud Schemes Popping Up Weekly for IRS CI - Mary Katherine Browne, Tax Notes. "Another case involved a Texas man who received over $17 million in PPP loan funds and used the money to purchase multiple homes, pay off the mortgages on properties in California, and buy a fleet of luxury cars. He was sentenced to 135 months in prison in July."

The operator of a New York homeless shelter copped to raiding nearly $2.4 million from the nonprofit's coffers and failing to pay taxes on it while she and her family lived in the lap of luxury, state Attorney General Letitia James announced Monday.

In addition to "shopping sprees" at Tiffany's and Bergdorf Goodman, [Defendant] used the money for cars, a gym membership and other personal expenses, according to the AG's office. She "grossly" underreported her income on tax filings starting in 2013, and also filed late or failed to file between 2014 and 2019, prosecutors said.

She probably doesn't have to worry about homelessness for a little while.

Celebrate responsibly. "It’s the 100-Year Anniversary of preferential tax rates for capital gains and tax-deferred like-kind exchanges. Under the Revenue Act of 1921 (11/23/1921), the top tax rate was reduced from 73% to 58%, and a new preferential rate for capital gains was introduced at 12.5%." - Justin Miller on Twitter.

November 23 - 100th Anniversary of a Capital Gains Preference - Annette Nellen, 21st Century Taxation. "The capital loss limitation was added in 1924 but tightened after large losses of 1929."

If the 100th anniversary of the capital gain preference doesn't spur you to gaiety, it's also FIbonacci Day and National Espresso Day!