Build Back Better 2.0 Still Raises Taxes For High Income Households And Reduces Them For Others - Howard Gleckman, TaxVox.

In a new analysis, the Tax Policy Center estimates that the major tax changes in the latest version of President Biden’s Build Back Better plan would cut taxes on average for nearly  all income groups in 2022. The exception: Those in the top 1 percent, who will make about $885,000 or more. They’d pay about $55,000 more than under current law. Those in the top 0.1 percent, who make about $4 million and up, would pay an additional $585,000 on average, a 5.9 percent reduction in their after-tax income.

Looking only at direct taxes—individual income taxes and payroll taxes—the plan also would cut 2022 taxes on average for every income group except those in the top 1 percent.  The highest-income households would face roughly the same increase in direct taxes in 2022 as they would with all major provisions. 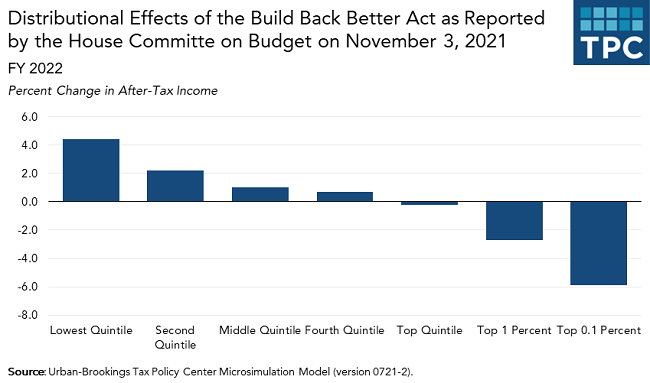 The picture would change somewhat in 2023. Among the reasons: The bill would extend the 2021 expansions of the Child Tax Credit (CTC) for 2022 only. In addition, one of the major tax increases in the bill, the corporate minimum tax on book income, isn’t scheduled to take effect until 2023. TPC allocates corporate taxes to households, as investors and workers.

And there's this: "Finally, analyzing the House Democrats’ plan is especially complicated because the effective dates of its many tax provisions vary widely. While TPC usually tries to show the effects of tax bills for a year when all tax changes are fully effective, there is no year when all of the BBB provisions would apply."

About two-thirds of people making more than $1 million would see a tax cut next year averaging $16,800, the Tax Policy Center said Thursday.

That’s primarily because Democrats are proposing to lift to $80,000, from $10,000, an annual cap on state and local tax deductions.

All but the top 1 percent of income groups — those making $884,900 or more a year — would see tax cuts in 2022 if the Build Back Better Act (H.R. 5376) becomes law, according to a new analysis by the left-leaning Urban-Brookings Tax Policy Center (TPC).

That impact, however, is only for the first year that the reconciliation bill would be in effect. Because the expanded child tax credit of up to $3,600 per child reverts to $2,000 per child in 2023, many in lower-income groups — as low as the $50,000 to $75,000 cohort — who would enjoy tax cuts in 2022 will see tax increases in 2023 as America’s largest companies pass along the costs of a new 15 percent corporate minimum tax on book income, according to the TPC.

The findings mark a big change from the September 27 TPC analysis of an earlier version of the reconciliation bill before House Democrats proposed raising the state and local tax deduction cap from $10,000 to $80,000 and making other changes that would impact high-earning households.

In a twist, the TPC found that those in the 95th to 99th percentile for income — or households earning up to about $885,000 — would see taxes drop on average. That’s likely thanks to Democrats’ plan to increase the cap on deducting state and local taxes from $10,000 to $80,000, a benefit that studies show would accrue largely to wealthier Americans.

Social spending bill could cut taxes for most millionaires: analysis - Jordan Williams, The Hill. "The analysis found that the package, called the Build Back Better plan, would give more than 65 percent of Americans making at least $1 million per year an average tax cut of $16,760."

The White House’s initial tax plans included raising the corporate tax rate for the largest firms from 21 percent to 28 percent, taxing investment income earned on assets such as stocks like ordinary income for those earning more than $1 million per year, and closing a loophole that allows the wealthy to pass down vast inheritances tax-free. The White House also wanted to raise the top tax bracket to 39.6 percent, which would have affected most taxpayers earning over $500,000 per year.

Those plans have now been shelved, due to Sinema’s steadfast opposition to raising corporate or individual tax rates and rural Democrats’ opposition to taxing inheritances at death.

Academic Suggests Alternative to Corporate Book Tax Proposal - Kristen Parillo, Tax Notes ($). "If lawmakers believe that companies are taking advantage of too many credits and deductions, a simpler solution would be to limit those incentives, Hanlon said."

Sen. Joe Manchin III (D-W.Va.) said Thursday that he opposes a provision of President Biden’s social spending bill to give a $4,500 federal tax credit for union-made electric vehicles, calling the incentive “wrong” and “not American.”

According to Automotive News, the senator said the tax credit in the roughly $2 trillion proposal to overhaul the nation’s health care, education, immigration, climate and tax laws “can’t happen,” putting him at odds with fellow Democratic Sen. Debbie Stabenow (Mich.), a chief sponsor of the provision.

But Manchin isn’t the only Democrat who has raised concerns about the protections.

Rep. Terri A. Sewell represents an Alabama district where Mercedes-Benz and Hyundai have announced plans to build electric vehicles. She said during the House Ways and Means markup of the budget reconciliation package that there shouldn’t be a choice between unionized and nonunionized workers.

Economy Loses More than Revenue Gains in the House Build Back Better Act - Garrett Watson, Tax Policy Blog. "Using Tax Foundation’s General Equilibrium Model, we estimate that the Ways and Means tax plan would reduce long-run GDP by about 0.4 percent, which in today’s dollars amounts to about $129 billion of lost output annually. We estimate the tax changes in the plan (including IRS enforcement and excluding other non-tax revenue raisers like drug pricing) would raise about $124 billion annually in new tax revenue in the long run, conventionally estimated in today’s dollars, meaning for every $1 in revenue raised, economic output would fall by about $1.04."

Digital Asset Reporting in H.R. 3684 Infrastructure Legislation - Annette Nellen, 21st Century Taxation. "While the goal was likely to make virtual currency exchanges such as Coinbase and Kraken be brokers, the reach is potentially wider. For example, what about a company that provides various software for transfers or wallets?"

The Build Back Better Act – Tax Implications for Cryptocurrencies - Jason Freeman, Freeman Law. "The tax changes in the BBB Act, if enacted, will have a significant direct and indirect impact on all participants in the crypto industry. As discussed above, the amended wash sale and constructive sale rules are designed to treat cryptocurrencies like securities and limit taxpayers from engaging in potentially abusive transactions solely for the tax benefits. In addition, a new surcharge on certain high-net-worth individuals and trusts/estates and increased funding for IRS enforcement will surely subject crypto earnings to more taxes and IRS scrutiny."

As the semiconductor shortage continues to idle auto factories and automobile inventory production, dealerships are continuing to see large inventory reductions. This trend appears likely to carry into 2022, leaving dealerships who use the LIFO (last-in, first-out) inventory method at risk of having to recapture substantial portions of their LIFO reserve. This recapture can increase income for both financial reporting and income tax purposes and generate unanticipated tax liabilities.

Both the National Automobile Dealers Association (NADA) and the AICPA have lobbied Treasury over the past year for LIFO reserve recapture relief without success thus far. The relief requested is for the IRS to certify that the foreign trade interruptions due to the COVID-19 pandemic are “qualified inventory interruptions” under Internal Revenue Code Section 473. This would allow dealers three years to replenish their inventory to pre-COVID levels and avoid the recapture of their LIFO reserve.

LIFO better measures current income than FIFO (first-in, first-out) inventory in inflationary times, but at the cost of building in distortions in the balance sheet - namely, inventory with a very low value. If inventory levels collapse and the old low-value inventory is sold, that low-cost inventory can trigger a lot of income.

New Jersey Governor Vetoes COVID-19 Business Tax Relief - Lauren Loricchio, Tax Notes. "New Jersey's governor has vetoed a bipartisan bill that would have allowed small businesses to defer the payment and remittance of some employment and business-related taxes during the pandemic, out of concern that the “proposed program sets a troubling precedent.'"

In its 2021 version of Publication 225, the “Farmer’s Tax Guide,” the IRS states with respect to Conservation Reserve Program (CRP) payments that, “You must include the annual rental payments…on the appropriate lines of Schedule F.”  Of course, by reporting CRP rents on Schedule F the payments are subjected to self-employment tax.  However, the IRS statement in Pub. 225 is an incorrect statement of the applicable law.  Not all CRP rental payments are subject to self-employment tax.

Bunching your expenses to make tax itemizing worthwhile - Kay Bell, Don't Mess With Taxes. "Bunching is what its name sounds like. You want to gather enough allowable expenses so that they total enough to exceed your standard amount. Essentially, you bunch them into one tax year"

Have a drink, donate an organ. An old urban legend tells of travelers having a drink and waking up in an ice-filled bathtub short one kidney.

There's nothing to that story, but there is a lot to organ donation, and today is National Donor Sabbath: "The concept behind this day is to unite the different people of different religions, while learning how to save a life by donating vital organs to those in need." Live organ donors in Iowa can qualify for a tax break.