Is it happening? Does it mean anything if it does? The House leadership appears to be pushing for a vote on the "Build Back Better" reconciliation package even without an agreement with the Senate. Yesterday intra-party negotiations among Democrats led to the replacement of a five-year suspension of the $10,000 cap on state and local tax deductions - the "SALT cap" - with an increase in the cap to $72,500. Many representatives criticized the SALT cap suspension as a giveaway to the wealthy.

Pelosi decided in recent days that she can’t wait for the Senate anymore, and the only way to pressure Senate Majority Leader Chuck Schumer’s senators is to actually present them with a bill that they have to make a decision on.

And far from dissuading the House’s aggressive legislative push, Tuesday’s poor election showing in Virginia and across the country seemed to give the House majority a new impetus to get this done quickly.

Of course, the Senate isn’t going to move quickly just because the House has decided it’s time.

Punchbowl's Jake Sherman opined on Twitter this morning of the House leadership's efforts to advance reconciliation:

The strategy has just completely fallen apart bc of the time it has taken and difficulties w senate moving. Everything Pelosi is doing is to get senate moving. Passing bif to president may not help that. But they feel as if they have no choice.

But getting a bill through the House isn't a sure thing. As Jay Heflin noted in yesterday's Roundup, five House Democrats say they will refuse to vote for the bill without a revenue score from the Congressional Budget Office. Jay's observation holds:

Reminder: It only takes opposition from four Democrats for a bill to not pass the House.

Alex Parker, a recovering journalist and close observer of Congress, says (on Twitter): "Maybe this just isn't going to happen. There's too many moving parts, too many people with vetoes, no practical way to get everyone in a room. And downsizing the bill is as complicated and difficult as adding to it." But he adds: "normally with this much at stake they find a way."

The House plan would raise the $10,000 cap on the state and local deduction to $72,500, starting in tax year 2021. It would also extend that higher cap through 2031, beyond its scheduled expiration after 2025. That feature means that the higher taxes in future years would pay for the short-term tax cut, at least in congressional budgeting terms.

Because the break would start in 2021, the House plan would provide an immediate windfall to people filing their tax returns early next year. Many people in this income group have been assuming the $10,000 cap will be in place when setting their paycheck withholding and estimated taxes, which means they will get a larger-than-expected refund in early 2022.

The updated Build Back Better Act (H.R. 5376), released November 3, includes changes in the language for energy tax credits and an increase in the maximum prices of vehicles that could benefit from an electric vehicle tax credit. It also reinstates provisions omitted from the October 28 version of the bill to boost allocations for the low-income housing tax credit and provide a new neighborhood homes tax credit.

Congressional Democrats Struggle to Nail Down SALT Cap Repeal - Frederic Lee and Doug Sword, Tax Notes ($). "House and Senate Democrats are trying to find a path for some kind of repeal of the $10,000 state and local tax deduction cap but are backing very different legislative proposals."

Biden urges swift action as Democrats scramble to deflect voter anger - Sean Sullivan, Michael Scherer and David Weigel, Washington Post ($). "Scrambling to make sense of the election results, White House officials and Democratic congressional leaders said they concluded that voters were unhappy with their incomplete push to spend trillions of dollars on public works, the social safety net and combating climate change. These Democrats said there is now a clear incentive to accelerate their work."

They assume that unhappiness with an "incomplete" push would go away on completion. But there is another view: "Much of the concern, in private conversations, has been focused on the decisions and performance of Biden, who took a huge political risk by pushing for a far-reaching liberal legislative agenda after running for office as a unifying moderate figure and winning only the slimmest governing majorities."

Under the current plan, most EVs would qualify for a $7,500 tax credit, and union-built EVs assembled in the U.S. would receive an additional $4,500 in credits. Only Ford, General Motors and Stellantis, Chrysler’s parent company, qualify for the extra incentive, a measure that could make customers more likely to buy their EVs to take advantage of the larger credit.

The proposal is drawing intense backlash from foreign-owned carmakers and even foreign governments. They’re lobbying Democrats to make last-minute changes as lawmakers ready their reconciliation package for a vote.

Comparing Europe’s Tax Systems: Corporate Taxes - Daniel Bunn, Tax Policy Blog. "Latvia and Estonia have the best corporate tax systems in the OECD. Both countries have a cash-flow tax on business profits. This means that profits only get taxed when they are distributed to shareholders. If a business decides to reinvest its profits instead of paying dividends to shareholders, there is no tax on such profits." 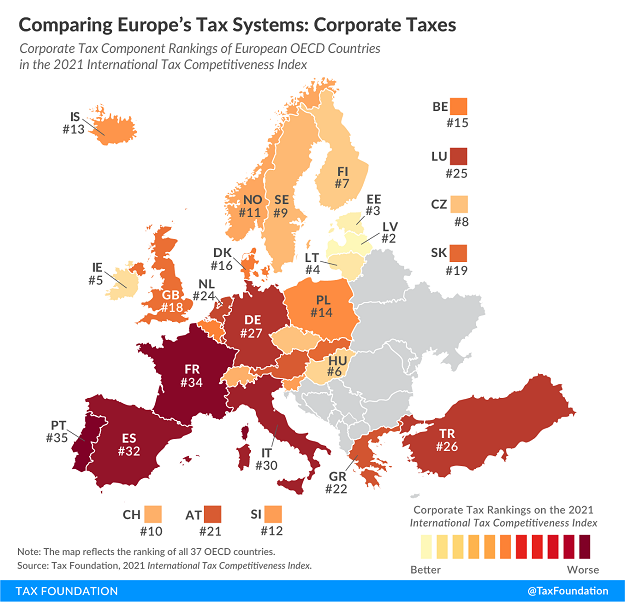 The post also includes the rankings of all OECD countries. The US currently ranks 20th of 36 countries - between Slovakia and Austria.

This means Iowans can take a credit against Iowa taxes on 1040s for optional entity-level taxes paid to other states, providing that the taxes are properly reported on Iowa entity filings and K-1s. This addresses a primary concern with entity-level taxes passed as SALT cap workarounds, as the credit for taxes paid in non-resident states can be worth more than a deduction for those taxes on the federal return. This is a state-by-state issue.

It's capital gains tax gain harvesting season - Kay Bell, Don't Mess With "But if you've been considering selling a holding or two, now might be a good time to act. It's a win-win if your long-term asset value is up and you're in a relatively low tax bracket. The profit will be taxed at capital gains rates likely lower than your ordinary income rate. Some might not owe any taxes all."

Tax and Practical Strategies to Mitigate No-Shows in Business - Kelly Phillips Erb, Bloomberg. "With budgets tight, every dollar matters—especially for small businesses. Recently, some business owners have taken to social media to complain about “no-shows.” Whether you run a salon or an accounting firm, chances are that sometimes folks make appointments and then don’t bother to attend."

Four Contracts Lapsed and Three New Ones Are in Place: What Does That Mean for Taxpayers? Part II: Help Is on the Way for Taxpayers Whose Payment Arrangements With Private Collection Agencies Were Terminated - NTA Blog. "Ideally, the IRS should have announced its plan of action for these terminated agreements prior to the expiration of the two lapsed contracts by timely informing affected taxpayers of their options. However, albeit a little late, I welcome the IRS’s efforts to make these taxpayers whole, and I appreciate the IRS’s willingness to continue to work with my office to protect the rights of all taxpayers."

Related: Why is it Important to Read IRS Notices?

What the IRS will be doing is they are going to be sending them out a letter very shortly, beginning in November, providing certain information to them, explaining that they could have an installment agreement similar to the sort of more informal agreements that they had with a private collection agency.

They would give them an opportunity to, in essence, roll over the terms in a more formal installment agreement. They would allow them to do it similar to a streamline, where you don't have to provide financial data in order to qualify for the agreement.

It Would Be a Mistake to Resurrect Corporate Alternative Minimum Tax - Alex Muresianu and Erica York, Tax Policy Blog. "Ultimately, the corporate alternative minimum tax has either ended up as a heavy burden on investment or as an ineffective revenue raiser. If politicians want to deal with the problem of targeted, non-neutral tax breaks as a way to raise revenue, they should repeal those policies directly, rather than use a complex policy like the alternative minimum tax that also punishes many legitimate deductions in the process."

What Is Biden’s Minimum Book Income Tax on Corporations? - Thomas Brosy, TaxVox. "Some differences between book and tax income are temporary while others are permanent. In 2020, for example, businesses could fully deduct for tax purposes the cost of many types of capital investments in the year they acquired those assets because of the 2017 Tax Cuts and Jobs Act. But when they report to shareholders, they must depreciate those assets over several years."

Good thing we have Halloween leftovers. Today is National Candy Day! It's also Use Your Common Sense Day, which really should coincide with tax filing deadlines.