Programming note: your blogger will kick off the fall CPE season today as an afternoon panelist for the Iowa State University Center for Agricultural Law and Taxation Fall Tax Schools. There are six sessions this year, three in-person and three online-only Today is online. Great for anyone looking for 16 hours of CPE.

Senator Joe Manchin said Congress needs more time to assess the impact of President Joe Biden’s $1.75 trillion tax and spending package on the economy and the national debt, slamming the door on hopes by Democratic leaders for quick action on the plan.

The West Virginia Democrat on Monday refused to say whether he supports the outline Biden presented last week or whether there had been any progress in negotiations over the weekend. His remarks are a blow to Biden, who presented to House Democrats what he said was a compromise plan worked out over weeks of negotiations that would win support from all 50 senators who caucus with Democrats.

The public objections voiced by Manchin, one of two key Senate Democratic holdouts on the reconciliation package, threatened to derail plans by House leaders for a speedy vote this week on a bill designed to fund much of President Joe Biden’s economic agenda. Arizona Sen. Kyrsten Sinema last week released a statement calling the initial outlines of the package “significant progress” but declined to offer her endorsement.

“As more of the real details of the [budget reconciliation bill] are released, what I see are shell games, budget games; that the real cost of the $1.75 trillion bill is estimated to be almost twice that amount,” Manchin said.

The Senator is referring to the fact that several spending proposals in the bill are being written for a shorter duration than originally expected, i.e., a proposal will be effective for two years instead of ten years. However, shortly before the proposal expires, it would be extended, giving credence to the adage that nothing is more permanent than a temporary federal government program.

House vote this week on Build Back Better? Maybe not. Sen. Joe Manchin yesterday said he wants to see an official budget score before he signs off on President Biden’s now-$1.75 trillion social spending and tax bill. Manchin expressed concerns about whether the latest bill hides its true cost by phasing out various provisions. He also objected to House progressives blocking a vote on the infrastructure bill until he publicly supports the social spending package. Manchin didn’t say he’d support the social spending bill as is, but he didn’t say he’d oppose it either. Liberals still want the House to pass both bills this week.

Terry McAuliffe could go down in Virginia’s gubernatorial race Tuesday, and neither congressional liberals nor centrists want to take the blame.

Democrats fear losing the marquee race in a state President Joe Biden won by 10 points last year could do irreparable damage to their already-fragile agenda heading into next year’s midterms. The result is some unusual last-minute machinations on Capitol Hill, as key members of the party’s two wings resort to rhetorical gymnastics to avoid being cast as obstructionists.

Agostino, a former IRS attorney and special assistant U.S. attorney, contends that the new proposal destroys government accountability and will make taxpayers believe that the “game is rigged.”

“We are saying that people who violate taxpayers’ rights will not be accountable for the violation of those rights. It’s bad tax policy,” Agostino continued. “Every government employee who has improperly imposed penalties for the last 23 years and every supervisor who hasn’t reviewed their employee’s work and allowed them to impose penalties for 23 years is going to be forgiven with no accountability, and we’re going to charge the taxpayers whose rights have been violated. It violates both procedural and substantive due process,” he added.

All in the service of helping the BBB revenue score.

Rep. Don Beyer, D-Va., a Ways and Means Committee member, said that the computation of the proposed new minimum tax remained a hot topic for debate. Beyer said some advocates for companies have argued deductible depreciation expenses should be included in the calculation of book profits subject to the minimum tax.

In the Senate, Finance Committee Chair Ron Wyden, D-Ore., said he planned to make sure the framework for the proposed minimum tax would allow big multinationals to reduce their taxable income by claiming tax breaks for research and development, green energy projects, housing and other items.

Allowing tax depreciation and full tax credits would mean that members of Congress could continue to complain about big companies paying no tax.

AICPA Argues Against Corporate Book Minimum Tax - Nathan Richman, Tax Notes ($). "'The introduction of an alternative tax system that is not based on tax law will not simplify the tax system, be certain, be neutral with respect to decision making by management, promote economic growth and efficiency, be transparent, nor minimize the tax gap,' the AICPA wrote in an October 28 letter to the Senate Finance and House Ways and Means committees."

Democrats propose expanding estate tax, GOP wants to kill 'death tax' - Kay Bell, Don't Mess With Taxes. "Democrats are in control of the White House and (sort of) Congress, but the GOP is fighting back. Republicans won this round, with the estate provisions dropped from the latest draft of the Biden budget plan."

Top Tax Rate on Personal Income Would Be Highest in OECD under New Build Back Better Framework - Alex Durante and William McBride, Tax Policy Blog. "Under the latest iteration of the House Build Back Better Act (BBBA), the average top tax rate on personal income would reach 57.4 percent, giving the U.S. the highest rate in the Organisation for Economic Co-operation and Development (OECD). All 50 states plus the District of Colombia would have top tax rates on personal income exceeding 50 percent." 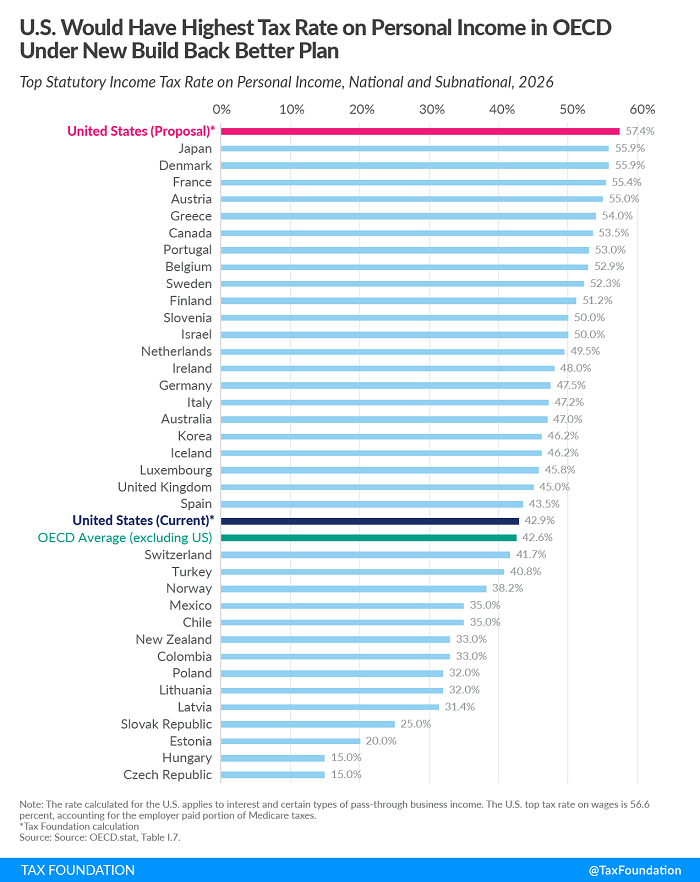 "Eight states plus the District of Colombia would face top tax rates higher than 60 percent."

The FIRPTA Withholding Obligation - Jason Freeman, Freeman Law. "Section 1445 of the Internal Revenue Code generally imposes a withholding obligation on purchasers (i.e., the 'transferee') with respect to a seller’s disposition of a 'U.S. real property interest' (USRPI).  Under section 1461, the transferee/purchaser is liable for withholding tax on the disposition.  Withholding is a mechanism to collect the tax that is imposed by the Foreign Investment in Real Property Tax Act ('FIRPTA')."

In other words, if you sell real property, and your buyer happens to not be from the U.S., you better make sure you hold back the withholding from the sales price; the IRS will want it whether or not you remembered to collect it from the buyer.

Smart Year-End Tax Planning Strategies Regardless of Changes in Tax Policy - Spencer Wilson, TaxBuzz. "You can offset investment gains by deducting up to $3,000 in losses against regular income. This is a particularly smart strategy for those who have either had a very good income year or a year where their investments have proven disappointing."

$450k Settlements To Undocumented Immigrants Separated At Border May Be Tax Free - Robert Wood, Forbes. "For plaintiffs claiming that their border separation caused them to have post traumatic stress disorder, the tax law remains unclear, but there is a good argument that PTSD is physical."

What is Dynamic Scoring? TPC’s Ben Page and John Buhl Discuss the Basics - Banjamin Page and John Buhl, TaxVox. "To think through how this works, consider President Biden’s proposal to raise the tax rate for high-income households. This would reduce the incentive to work, because the higher tax lowers the benefit someone gets from the next additional dollar of income they can earn. If you add that up for all taxpayers, total economic output would fall. That, in turn, would lower the amount of revenue the bill raises compared to a conventional score, because you’d be taxing a smaller amount of economic activity."

Family Attorney Fears Tax Decision Smuggles Religion Into Family Law - Peter Reilly, Forbes. "The dispute with the IRS was over the marital deduction making for a deficiency of over $35 million. The IRS argued that Semone was not actually married to Ziona - two children and 27 years of living as husband and wife to the contrary notwithstanding."

Ohio Board Grants Relief for Kidnapped Taxpayer - Amy Hodges, Tax Notes ($). "A taxpayer who was kidnapped abroad and detained for two years was entitled to penalty relief for her failure to pay property taxes during that time, according to the Ohio Board of Tax Appeals."

Now everyone will want to be kidnapped so they can pay their property taxes late.

Today is Election Day in many places. Best wishes for those who celebrate.