The deadline to opt in to the optional PTET for 2021 is October 15, 2021. Your business needs a Business Online Services account to opt in. If your business does not have an account, we recommend creating one by October 8 to avoid missing the election deadline.

These entity-level taxes on partnerships and S corporations are a way for business owners to get around the $10,000 cap on state and local tax deductions. As far as I know, New York is the only state with such an early deadline. Other states allow an election by the deadline for filing 2021 returns.

Stepping Off The Edge Of (But Still On) The Fiscal Cliff - Renu Zaretsky, TaxVox. "Senate Democrats appear to have accepted a proposal from Minority Leader Mitch McConnell that would allow the federal government to continue borrowing money into December. As usual, details still need to get resolved. But Republicans will no longer block a Democrats-only vote—for now. The agreement sets up likely battles over a big social spending bill and a longer extension of government borrowing authority in two months. Democrats still insist they won’t roll a debt increase into a big budget reconciliation bill. Republicans say they must."

Senate Democrats emerged from a closed door special caucus meeting on the debt ceiling on Wednesday and said they intend to take GOP Minority Leader Mitch McConnell up on his short-term debt ceiling increase.

To offer a short-term fix, Senate Republicans today vowed to not block legislation that would extend the debt limit to a fixed dollar amount and cover spending into December. Democrats are opposed to applying a specific dollar figure to the debt limit because it could be used against them in ads running during the 2022 election season. Senate Democrats have yet to accept or reject the offer.

The more attention lawmakers spend on addressing the debt ceiling, the less time they have to breathe new life into the $3.5 trillion tax and spending bill. Based upon current negotiations, there appears to be some agreement among Democrats to reduce the bill’s total cost to somewhere between $1.9 trillion to $2.9 trillion.

Jay clarifies the murky relationship between the debt limit and the Biden tax and budget proposals.

Democrats’ tax plan upends estate planning using trusts with life insurance - Lynnley Browning, Financial Planning. "The tax plan taking shape in Congress would strangle a strategy widely used by the wealthy to shield their estates from taxes and pass on major wealth to heirs. Specifically, it would erase the long-standing benefit of keeping life insurance in certain trusts, by making its value subject to the 40% estate tax when the policy owner dies. That’s a huge change: Currently, the trusts and their assets aren’t subject to the levy."

How the Tax Bill Could Hit Two U.S. Companies, One Domestic, the Other Global - Theo Francis and Richard Rubin, Wall Street Journal ($):

Under the plan, Advance Auto could see its tax rate rise to just over 29%, from roughly 24% in 2020, including state and local taxes, according to the analysis. The domestic retailer’s tax rate was almost 38% before the 2017 tax overhaul, Zion Research found.

In effect, the Democratic proposals would increase money from domestic companies like Advance Auto through the higher statutory tax rate. It would boost money from U.S.-based multinationals like Agilent with higher minimum taxes on foreign income.

With GOP sidelined, Manchin steps up to defend fossil fuels- Benjamin J. Hulac and Joseph Morton, Roll Call. "A list of conditions, obtained by Politico, that Manchin outlined before voting to start the process gives fresh insight into what he will and won't support. It also underscores the hurdle the coal-state lawmaker poses to a transformational climate bill. A Democratic aide confirmed the authenticity of the list."

Credit Unions Unmoved by Compromises in Reporting Proposal - Fred Stokeld, Tax Notes ($). "The proposed reporting requirement on financial institutions for account inflow and outflow information of taxpayers to the IRS shouldn’t be included in the Build Back Better Act, according to the National Association of Federally-Insured Credit Unions (NAFCU)." 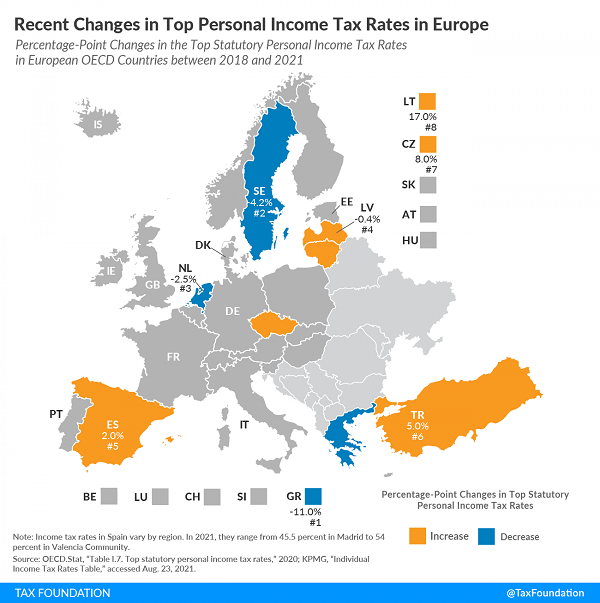 Farmers and ranchers in most of U.S. get drought tax relief - Kay Bell, Don't Mess With Taxes. "Those locale specifics are in IRS Notice 2021-55, which lists the applicable regions in 36 states and one U.S. territory. But so that you don't have to click over there, below are the parched parcels by state."

In Tesla’s $137M Race Verdict, Big Winner Is IRS - Robert Wood, Forbes. "In Mr. Diaz’ case, he should at least be able to deduct his legal fees, since his case arose out of employment. But most of his award is punitive damages, and punitive damages are always taxed."

EU Digital Levy Still A Question Mark Ahead Of Global Deal - Natalie Olivo, Law360 Tax Authority. "The EU's current levy is not the first time bloc leaders have attempted a digital measure. The European Commission, the EU's executive arm, in 2018 proposed a 3% tax on online revenue, but the measure failed to get unanimous approval from member states."

Decoding IRS Transcripts and the New Transcript Format: Part II - NTA Blog. A useful guide from the IRS Taxpayer Advocate on how to access and understand your personal IRS account information online.

The case of Garcia v. Commissioner, 157 T.C. No. 1 (2021) provides clarity and guidance on the Tax Court’s jurisdiction in passport cases as the Court issues a precedential opinion to make clear some of the things that can and cannot happen in a contest regarding the certification of passport revocation.  I did not find the decision surprising.  The Court’s passport jurisdiction is quite limited.  Petitioners will generally be disappointed in the scope of relief available through this new type of Tax Court jurisdiction.

The company, called EnQ, swamps the IRS' switchboard with its own calls, then sells desirable, time-saving slots near the head of the hold line to accountants and tax preparers willing to pay up to $1,000 a year.

Who Is High Income, Anyway? Social Comparison, Subjective Group Identification, and Preferences over Progressive Taxation - Asli Cansunar, The Journal of Politics. "...I find strong evidence for the model’s empirical implications: most high-income earners support progressive taxation when they identify themselves with a lower group. Additionally, individuals who overestimate the earnings of the rich are more likely to support progressive taxation."

Or, people favor higher taxes on the rich, who is somebody else.

Petitioner asserted in her petition that Cadillac's sale proceeds “went directly to Virginia Commerce Bank * * * to pay for someone else's responsibility” and that she “never received the money directly or indirectly.” The AO investigated this allegation during the second supplemental hearing. The documentary evidence establishes that a portion of the proceeds was used to repay Cadillac's $1,843,758 debt to VCB. Petitioner benefited from that repayment because her share of Cadillac's liabilities was thus reduced by $611,994.

The taxpayer argued that a different debt was paid. But, as Judge Lauber explains, the tax law doesn't care:

For Federal tax purposes, however, the question is not whether petitioner benefited from these loan repayments or “constructively received” the funds. Under section 702(a) she is taxable on her distributive share of the section 1231 gain whether or not it was distributed.

The tax law wants you to pay taxes on amounts on your K-1, whether or not you get cash from the partnership or S corporation to pay the tax. This can lead to unfair treatment of minority owners getting squeezed by controlling owners who can pay their taxes without distributions. But that's a state law fight; the IRS doesn't care, and neither did the Tax Court:

We conclude that petitioner was required to include in gross income for 2013 her $1,073,312 distributive share of Cadillac's net section 1231 gain. She does not dispute in any other respect the tax reported on her return. And she did not offer, during the CDP hearing or in this Court, any defense to the addition to tax for failure to pay (apart from contending that she had no liability for the tax). We thus reject her challenge to her underlying tax liability.

The Moral? If it's on your K-1, you need to report it, or have a better explanation for not doing so than failure to receive cash from the partnership.

Force de Frappe. Today is National Frappe Day. "Frappes are a favorite for all ages and all ranges of taste. From Cupcake Creme to Peanut Butter Cup and everything in between, frappes are undoubtedly an American staple in the coffee consuming world."