Under current law, that amount is set to expire after December 31, 2025, and revert to the original $5 million base amount, indexed to inflation. For 2021, the applicable exclusion amount is $11.7 million for individuals, and double that for married couples filing jointly.

But in the legislation drawn up by House Democrats, that expiration date would be moved to the end of this year, which would leave open a short window of opportunity for estate planners’ clients to make gifts that use up the extra exemption.

The problem, Sherby continued, is that many clients who will have taxable estates if the applicable exclusion amount drops in 2022 can’t afford to make such gifts.

S Corp To Partnership Conversion Under Build Back Better - Peter Reilly, Forbes. "One of the most exciting provisions of the Build Back Better Act, to me anyway, is the opportunity that it gives for a tax free conversion to partnership for some S corporations.  There may be some people who don't find this exciting thinking that partnerships and S corporations are both flow-through, so it is six of one, half a dozen of the other.  But there are some big differences.  And this provision may be a big opportunity for some."

Peter doesn't mention one of the biggest benefits. Many S corporations that would be eligible to become partnerships tax-free - those who became S corporations before May 13, 1996 - are what I call "zombie" S corporations. They have sold all of their business assets but haven't liquidated them to partners, and instead hold them in investments, such as stocks and bonds. The tax law makes it difficult to continue as an S corporation with primarily passive income, so these S corporations invest in partnerships that generate "good" gross receipts to stave off rules that would force them to liquidate or become a C corporation. This provision would magically solve that problem for qualifying S corporations.

It bugs me that a routine filing disclosing foreign financial accounts over $10,000 goes to the "Financial Crimes Enforcement Network" - as if any U.S. citizen working overseas is automatically a criminal suspect for committing personal finance while abroad.

Second Circuit: SALT Deduction Cap Is Constitutional - Andrea Muse, Tax Notes ($). "A three-judge panel with the Second Circuit ruled October 5 in New York v. Yellen that the federal Tax Cuts and Jobs Act's $10,000 SALT deduction cap does not unconstitutionally coerce the states to abandon their preferred fiscal policies. The court affirmed the district judge’s opinion that New York, Connecticut, Maryland, and New Jersey had standing to challenge the cap but had not plausibly alleged that the cap meaningfully constrains the states’ decision-making processes."

A result that should surprise no one, as the alternative minimum tax effectively limited state and local tax deductions for many taxpayers for years before the cap was enacted.

Appeals court rules against blue states in lawsuit over SALT cap - Naomi Jagoda, The Hill. "The appeals court ruling comes as congressional Democrats are considering including some type of change to the SALT deduction cap in a wide-ranging social spending package. Repealing the cap is a top priority for some Democratic lawmakers in states such as New York and New Jersey, but some progressives have expressed concerns that doing so would largely benefit high-income households."

The outline of the administration’s proposal contemplates collecting gross annual inflow and outflow data from nearly every account held at a financial institution in the United States. Various limits have been suggested to narrow that to a subset of accounts based on a threshold level of cash flow or the total income of the account holder. One of the possible concessions that has been floated is to raise the threshold gross cash flow below which accounts wouldn't be reported from the $600 threshold that the administration proposed to $10,000. Another is to have banks report only on the accounts held by taxpayers with incomes over $400,000.

However, those limitations don’t solve the fundamental problem with this proposal — that it would capture far more data than would be necessary to accomplish its goals, and yet it wouldn't capture the information the IRS would need to readily identify tax mistakes or misdeeds.

A recent Tax Foundation analysis considered how various proposals from the Biden administration, from Congress, and from the Organisation for Economic Co-operation and Development would affect the effective tax rates (ETRs) on the foreign profits of U.S. multinationals. That analysis focused on how each policy and proposal would affect the overall ETRs. But which industries would be most heavily affected by these proposals?

The nonmetallic mineral product manufacturing industry—which produces glass, stone, clay, and concrete products—relies heavily on tangible assets and has high variation in the foreign tax rates it faces, exposing it to the country-by-country calculation and repeal or reduction of the tangible asset exemption. Accordingly, this industry is the most heavily impacted by all the proposals considered here. The transportation and warehousing industry has similar traits, and thus is always among the top five most heavily affected industries. Notably, across all of these proposals, almost all industries among the top five most affected already face effective tax rates on their foreign income in excess of the statutory 21 percent corporate tax rate.

Tougher Than IRS? California Franchise Tax Board - Robert Wood, Forbes. "When it comes to taxes, most people think about the IRS. But if you live or do business in California, state taxes are a big piece of what you pay. California does a good job of aggressively drawing people into its tax net of high individual (13.3 percent) and business (8.84 percent) tax rates. Add the state’s notoriously aggressive enforcement and collection activities, and it’s a perfect storm."

Iowa business association vice president calls 2021 corporate tax changes ‘a mixed bag’ - Mary Stroka, The Center Square. "The Iowa Department of Revenue released tax guidance Oct. 4 on the changes for 2021 taxes, which also include the elimination of federal deductibility and the Iowa corporate income Alternative Minimum Tax. Under Senate File 619, which Gov. Kim Reynolds signed in June, bonus depreciation will be allowed for property placed in service for tax year 2021 and beyond. Iowa had the highest corporate income tax rate, 12%, before the bill, which lowered it to 9.8%."

When the loss of the deduction for federal taxes is taken into account, the effective rate had been 10.88%. While there is a real rate reduction, it is less than advertised, and Iowa still has one of the highest corporate rates in the country, behind only New Jersey and Pennsylvania.

Another complication to consider, Hecht said, is the growing number of states that are passing legislation to tax partnerships in a different way. Traditionally, partners are taxed on the income that flows down to them, and that is done via the personal income tax. In recent years, however, states have been adopting entity-level taxes on pass-through businesses.

Such taxes allow pass-through businesses to receive a federal deduction at the entity level for state taxes paid. In some states, the pass-through also gets a state tax credit at the partner level. Other states do not offer the credit, but the partners can exclude that portion of income that was subject to the entity tax. These taxes are effectively a way to work around the $10,000 cap on the federal deduction for state and local taxes paid.

Corporate-Owned Life Insurance – Impact on Corporate Value and Shareholder’s Estate - Roger McEowen, Agricultural Law and Taxation Blog. "A corporate buy-sell agreement funded with life insurance is fairly common in farm and ranch settings where there is a desire to keep the business in the family for subsequent generations and there are both on-farm and off-farm heirs.  When a controlling shareholder dies, it can be a good way to get the control of the business in the hands of the on-farm heirs and income into the hands of the off-farm heirs.  But, how does corporate-owned life insurance impact the value of the company and the value of the decedent’s gross estate?"

How To Make Retirement Saving Easier For Millions Of Americans - Renu Zaretsky, TaxVox. "The House Ways & Means Committee included two ideas in its $3.5 trillion budget reconciliation bill that could help. One would require most employers to automatically enroll their workers in retirement savings plans. The other would make the current savers credit partially refundable so those without any income tax liability would become eligible."

Decoding IRS Transcripts and the New Transcript Format: Part I - NTA Blog. "Taxpayers may be able to get answers to their questions quickly and efficiently by requesting and reviewing their transcript – that is, if they can decipher them. Taxpayers (and tax professionals with a properly executed Form 2848, Power of Attorney, or Form 8821, Tax Information Authorization) can request a transcript online through the IRS’s Get Transcript Online portal or their online account; by mail; or by calling the IRS’s automated phone transcript service at 800-908-9946. With the difficulty reaching the IRS by phone or correspondence during the last two filing seasons, using the portal or online account may be more efficient than calling the IRS due to long wait times, the potential inability to speak with an available customer service representative, or the length of time for the IRS to respond to a mailed transcript request."

Despite what you may see on the news—and hear from politicians—U.S. taxes are low relative to rates in other high-income countries. In fact, when you compare marginal rates around the world, the U.S. doesn’t even land in the top 25. We are, for example, far below Sweden’s highest marginal tax rate of 76 percent.

When you add in deductions, credits, and exemptions at the state level—largely carved out by legislatures to woo out-of-state dollars—the result can be extremely tax favorable. Stashing or settling assets inside these states is attractive, causing them to be whispered about as tax havens. Delaware? Florida? Nevada? They roll off some advisers’ tongues as easily as the Cayman Islands and the Bahamas.

Insurance Paid via Cafeteria Plan to Satisfy Requirements of Separation Agreement Represented Deductible Alimony - Ed Zollars, Current Federal Tax Developments. "The IRS argued that Charles Leyh should not be allowed a deduction for alimony for amounts he paid for health insurance for his soon to be ex-wife via his employer’s cafeteria plan pursuant to a separation agreement, arguing Charles got an impermissible double benefit since the amount paid for her insurance was not included in his income.  But in a published opinion, the Tax Court disagreed, finding that no impermissible double benefit existed, as his spouse reported that amount as income on her separate return for the year."

Recipe for Sales Tax on Food in Minnesota - Too Complex! - Annette Nellen, 21st Century Taxation. "...the entire sales tax system can be changed from being assessed at point of consumption to being computing using a formula approach of Income less Savings = Consumption."

The post reproduces this lovely chart from the Minnesota Department of Revenue: 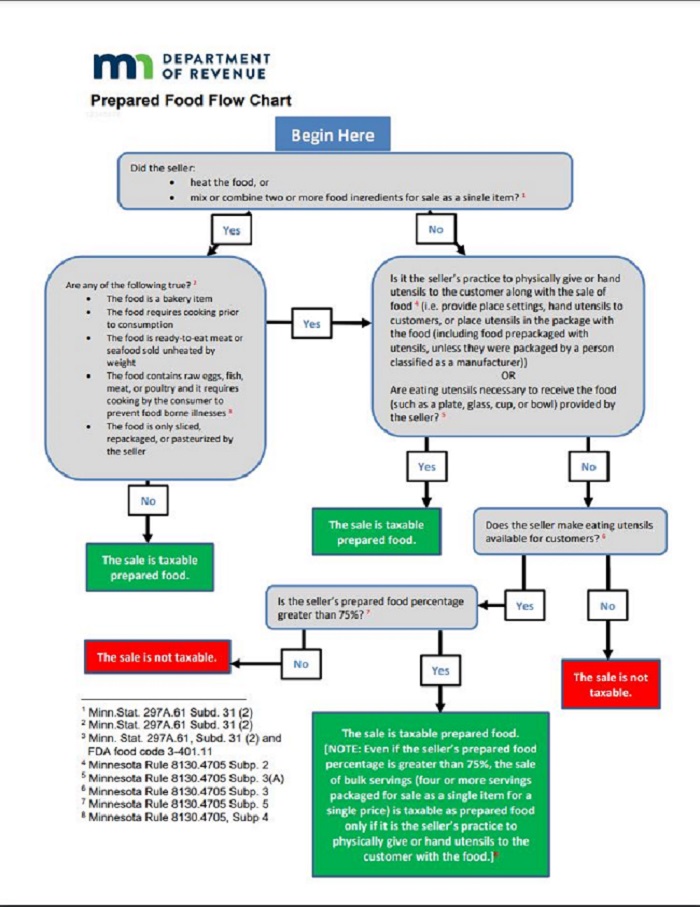 Property tax proposals — one real, the other fake — under scrutiny - Kay Bell, Don't Mess With Taxes:

Meanwhile, there's another property tax matter that's cropped up in the other major Biden Administration proposal, the infrastructure plan.

The problem with this tax is that it's a fake one, but it's gotten social media attention.

Over the weekend, a post appeared on Facebook warning that the plan to fix roads, bridges, and much more contained a 3 percent federal tax on all personal and commercial real estate.

As Ben Frankliin wisely advised in his Poor Richards Almanack blog, don't believe everything you read on the internet.

Dang, I only have sons. Today is National Transfer Money to Your Daughter Day!