“One of the ideas that’s out there is fully fund what we can fully fund, but maybe instead of doing it for 10 years, you fully fund it for five years,” Rep. Alexandria Ocasio-Cortez (D-N.Y.) said Sunday on CBS News’s “Face the Nation.”

But reducing the size of the spending package through timing changes might not sit well with moderates, who may argue the timing changes obscure the true cost of the legislation.

“The idea that we would enact a whole bunch of programs and sunset them after two years, three years, four years, to me that’s just budget gimmickry,” Rep. Ed Case (D-Hawaii) told The Hill on Monday. “That’s not solid budgeting, that’s not solid policy, that’s deceptive. And it’s basically completely designed to avoid the hard decisions that now face us, which is to choose among an array of worthy initiatives the ones that will truly benefit the people that most need help.”

A leading House progressive said he’d be willing to slash the cost of the 10-year, $3.5 trillion proposed reconciliation bill by reducing the time it covers to five years.

That would mean that new spending and tax cuts would expire after five years, though perhaps not the tax increases proposed to pay for them. The House Ways and Means Committee advanced tax increases estimated to generate $2.3 trillion over 10 years, which congressional leaders point to as adequate to largely pay for whatever compromise is reached.

Few things are as immortal as temporary government spending programs.

Neal Seeks To Protect $2.3T Tax Package In Budget Talks - Alan Ota, Law360 Tax Authority ($). "As a smaller reconciliation bill takes shape in negotiations, Rep. Brad Sherman, D-Calif., who is an accountant, predicted a wave of efforts by Democrats to jettison or dilute some of the proposed tax hikes."

Still have lots to work through - Bernie Becker, Politico:

In the end, President Joe Biden and House Democratic leaders essentially bagged a vote on the Senate-passed infrastructure measure last week, and made it clear that the broader tax-and-spend measure under consideration would have far less than $3.5 trillion in benefits.

Internally, some Democrats themselves are worried about how they’ll complete those two central planks of the Biden agenda, as our Sarah Ferris, Nicholas Wu and Heather Caygle reported.

But this much seems clear: Democrats still have a lot of negotiating among themselves to try and hash out their measure to plug the safety net and tax the rich and corporations.

Proposed Top Combined Marginal Capital Gains Tax Rate Would Be Third-Highest in OECD - Erica York, Tax Policy Blog. "In the U.S., long-term gains currently face a top marginal tax rate of 23.8 percent at the federal level, the result of a maximum 20 percent capital gains tax rate plus a 3.8 percent net investment income tax. The House Build Back Better Act proposal would raise the top rate to 28.8 percent, and on top of that, apply a new 3 percent tax on income of top earners, including capital gains. The resulting 31.8 percent top marginal tax rate would be the highest federal tax rate on capital gains since the 1970s—and above the generally estimated revenue-maximizing rate of 28 percent." 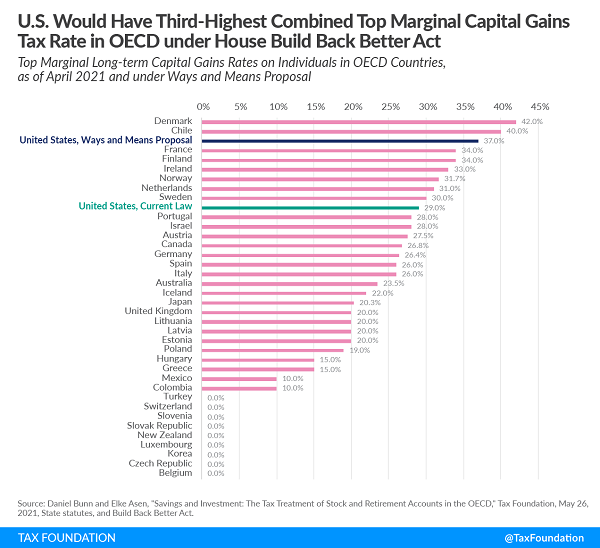 North Dakota Governor Proposes Income Tax Relief - Carolina Vargas, Tax Notes. "Under the governor's Accelerate North Dakota spending plan, approximately $207 million of the estimated $1.1 billion excess general fund balance will be used to provide an individual income tax credit of up to $500 per filed return for tax years 2021 and 2022, according to a September 30 release."

The Iowa Department of Revenue reviewed changes made by legislation enacted in 2018 to the corporate income tax beginning on or after January 1, 2021, including fewer brackets at reduced rates; the elimination of the deduction for paid federal income tax; and the repeal of the alternative minimum tax credit.

The DOR also reminded taxpayers about recently enacted legislation that conformed the state to the first-year bonus depreciation under the Internal Revenue Code for property placed in service during tax years starting on or after January 1, 2021.

A tax haven in America’s heartland - Washington Post Podcast. "The United States has long condemned secretive offshore tax havens where the rich and powerful hide their money. But a burgeoning American trust industry now shelters the assets of wealthy foreigners by promising even greater secrecy and protection. That same secrecy has insulated the industry from meaningful oversight and allowed it to gain new footholds in states like South Dakota and Alaska."

One of the foreign dignitaries highlighted in the Pandora Papers report was King Abdullah II of Jordan, who reportedly worked with a British accountant in Switzerland and lawyers in the British Virgin Islands to set up at least 36 shell companies and purchase 14 luxury homes worth more than $106 million in the United Kingdom and the United States.

Former U.K. Prime Minister Tony Blair and his wife saved £312,000 in stamp duty when they bought a British Virgin Islands company that owned a London building from the family of Bahrain’s minister of industry and tourism, Zayed bin Rashid al-Zayani, the ICIJ said. Stamp duty is owed only on the sale of the real estate itself and not when an entity that owns the real estate is sold.

The ICIJ’s reporting on the Pandora Papers isn’t limited to the political class. Among the famous (and infamous) celebrities whose names appear in the leaks are pop music star Shakira, who has had tax problems in Spain, supermodel Claudia Schiffer, and Italian mobster Raffaele Amato, who is known as Lell o' chiatt, or Lell the Fat One.

Supreme Court Won't Hear Challenge To $700K FBAR Penalty - David Hansen, Law360 Tax Authority ($). "Alice Kimble had argued the Federal Circuit erred by upholding a ruling that she willfully failed to file the reports, known as FBARs, justifying a penalty that was excessive. Her penalty was calculated under Title 31, Section 5321 of the U.S. Code, which was amended in 2004 increasing penalties for willful violations of FBAR requirements to either $100,000 or 50% of the balance in the foreign account, whichever was higher."

Oct. 15 also the deadline for foreign account FBAR filings - Kay Bell, Don't Mess With Taxes. "That's right. Owners of foreign accounts now face the same due date as regular income tax taxpayers who got extensions to file. But FBAR filers didn't have to send in any extra paperwork for the added time... If you are required to file an FBAR and don't do so, you could face a civil penalty of up to $10,000."

Notice 2021-55 contains an appendix listing counties and cities in 36 states and one U.S. territory that suffered exceptional, extreme or severe drought conditions between September 1, 2020, and August 31, 2021. The IRS updates this list annually each September.

The notice provides a one-year extension that gives farmers and ranchers until the end of the tax year after the first drought-free year to replace sold livestock and defer the federal income tax on any gains from the original drought forced sales. This relief generally applies to capital gains realized by eligible farmers and ranchers on sales of livestock held for draft, dairy or breeding purposes.

Hobby Loss Expenses Can Only Be Deducted as Miscellaneous Itemized Deductions - Ed Zollars, Current Federal Tax Developments. "The taxpayers did not agree with this view.  In their view the deductions under IRC §183(b) should be deductible in computing adjusted gross income, which would make them no longer itemized deductions and, thus, by extension not miscellaneous itemized deductions."

Because we're accountants. Today is National Get Funky Day. Be careful out there.