Rumors of progress. The Billionaire tax we discussed yesterday appears to have flamed out. Rumors and reports have more pieces falling out of the Democrats' tax plan, replaced by new pieces. Punchbowl news reports:

Democrats seem to have settled on a new tax plan to help pay for their reconciliation package. It’s a surtax on wealthy Americans. Under the plan as envisioned at the moment, rich Americans will pay an additional 5% tax on income over $10 million, and an additional 3% on top of that on aggregate gross income over $25 million. This replaces the proposed “billionaire income tax,” which faced opposition from several Democrats, including Sen. Joe Manchin (D-W.Va.).

On the business side, it seems nearly certain Democrats are going to impose a 15% corporate minimum tax rate. 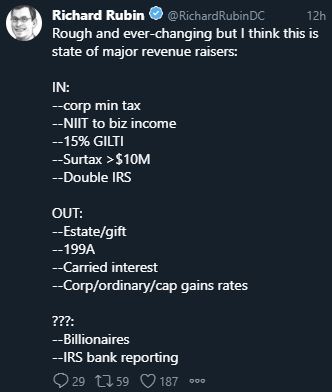 It’s not so much that they don’t trust Biden -- in fact, many of them offer praise for the president  -- but they definitely don’t trust Sens. Joe Manchin (D-W.Va.) and Kyrsten Sinema (D-Ariz.). That Senate pair has blocked environmental initiatives, paid family leave, Medicare expansion, free community college and other progressive priorities from being included in the reconciliation package. In return, progressives say there’s no reason to vote on the infrastructure bill -- which Sinema and Manchin played huge roles in crafting -- before they have a chance to examine the full text of the BBB.

So while it appears that pieces of a compromise may be falling into place, nothing really happens until it all happens. Stay tuned.

Just the Fact Sheet. A Fact Sheet released this morning ahead of Biden's visit to the House mentions the following:

- A 15% minimum tax on fiinancial statement income on corporations with "over $1 billion in profits."

- A 15% GILTI rate with country-by-country computations, inflating the total tax on foreign operations.

- Application of the 3.8% Net investment income to non-passive income.

- Changes in treatment of grantor trusts.

- A tax on unrealized income of "billionaires."

- Changes to the cap on state and local tax deductions.

- Changes to the Sec. 199A QBI deduction

Whether this reconciliation "framework" will be enough to get the house to pass the infrastructure bill - the goal of the Biden visit to the House today - is unclear.

Our Jay Heflin in D.C. will have more on the "framework" later today at www.ebtaxblog.com.

The House plan included a 3% tax on adjusted gross income over $5 million. The updated plan is expected to include a 5% tax above $10 million. An even higher bracket is possible. That would effectively bring the top tax rate on ordinary income to at least 42% plus 3.8% in other taxes, while the top capital-gains rate would be at least 28.8%. But those taxes still wouldn’t change the definition of income in a way that captures billionaires’ unrealized gains.

A tax based on AGI means that it won't be affected by charitable contributions or other itemized deductions.

Still, Democrats could get close to $1.7 trillion in revenue and other offsets without relying on the billionaires’ tax, marginal rate increases or the bank-reporting requirements, according to an estimate from research firm Cornerstone Macro. The bulk of the money would come from the corporate minimum tax, international tax changes and from applying a 3.8% investment-income tax to active business income.

The international changes likely include an increase in the effective "GILTI" rate on operating income from non-U.S. subsidiaries. Combined with changes in how the tax and related credits are computed, this can be painful for U.S. taxpayers with foreign operations.

The application of the 3.8% tax on net investment income to non-passive income would be a significant tax increase on pass-through taxpayers.

The emerging agreement isn’t expected to include the House’s proposals on gift and estate taxes, which would have lowered the estate tax exemption and limited certain transfers to trusts, according to people familiar with the negotiations.

That doesn't mean 2020 estate planning is for naught, as the reduction in the estate tax lifetime exemption is already slated to take place in 2026 absent Congressional action.

The Ways and Means GILTI reform has the following major features: It would raise the statutory corporate income tax rate from 21 percent to 26.5 percent, while lowering the GILTI income deduction from 50 percent to 37.5 percent. Together, these measures would raise the US effective statutory rate on foreign-source income from 10.5 percent (21*(1-.5)) to 16.5625 percent (26.5*(1-0.375)).

Manchin dampens progressive hopes for billionaires tax - Hanna Trudo, The Hill. "But the billionaires tax itself seemed to be on life support given his opposition, and Sen. Kyrsten Sinema’s (D-Ariz.) reluctance to hiking tax rates had poured even more cold water on another left-wing goal."

Inching Towards A BBB Agreement - Renu Zaretsky, Daily Deduction. "Democrats appear to have dropped paid family and medical leave from their compromise Build Back Better bill as they continue to narrow differences between progressives and moderates. Liberals still insist they won’t vote for a bipartisan infrastructure bill until they see legislative language on BBB. But Speaker Nancy Pelosi is pushing for a public works vote first—this week.  Rep. Jim McGovern, chairman of the Rules Committee, said an infrastructure vote this week is 'still a possibility.'"

Negotiations are ongoing, Neal said, noting that he had talked to Sinema and that he is open to modifying Ways and Means’ 3 percent surtax on incomes above $5 million, boosting the threshold to Sinema’s desired $10 million.

A 15 percent corporate minimum tax favored by the White House “is still being hashed through,” with one challenge being how to value assets, Neal said.

A proposal for banks to report gross inflows and gross outflows of more than $10,000 on bank accounts is still being discussed, Neal said. Manchin bad-mouthed the proposal October 26, leading some to think it was on the ropes.

Now the proposal is struggling to survive. But Manchin isn’t the only one to blame. Rep. Richard E. Neal (D-Mass.), chair of the House Ways and Means Committee, has questioned whether it will hold up in court. That would dovetail with Pelosi’s private opposition, and both of them working together suggest there may be plenty of other House Democrats privately opposed.

And other Senate Democrats appear to oppose the proposal but don’t want to say so openly. After all, it’s not easy to come down on the side of protecting the wealth of billionaires.

Sinema steers Dems into uncharted territory on taxes - Brian Faler, Politico. "With their new billionaires tax proposal meant to placate Sinema, Democrats are building an entirely new tax regime on the fly, amid numerous questions over not only how it would work but whether it is even constitutional. And that's not to mention hostility from House Democratic tax writers, as well as Sen. Joe Manchin (D-W.Va.), another centrist party leaders are trying to appease."

Crucial talks on Biden agenda enter homestretch - Alexander Bolton, The Hill. "A Democratic senator briefed on the negotiations said White House officials 'are certainly increasing the intensity and pace of the talks' because the president is eager to show significant progress before departing Thursday for a trip to Europe, including a visit to the COP26 climate summit in Glasgow, Scotland."'

Still, tax increases on corporations and the richest households are likely to be the major moneymakers in the package, even as negotiators largely abandoned plans to increase tax rates on corporations and upper-income households because of opposition from Sen. Kyrsten Sinema, D-Ariz. Her vote would be enough to sink the bill in the evenly divided Senate, where Republicans remain unified against it.

A plan unveiled Wednesday to impose a new tax on the unrealized gains of assets of about 700 billionaires drew a mostly skeptical initial reception.

Gaming The SALT Cap May Be Congress’s Worst Tax Idea Of The Year - Howard Gleckman, TaxVox:

Ever since Congress capped the state and local tax (SALT) deduction in 2017, a small group of Blue State Democrats has demanded the cap’s repeal. Indeed, they have made it their price for supporting President Biden’s Build Back Better social spending bill.

To deduct home office expenses, a taxpayer must use the space exclusively and regularly:

Tax Court Dissects Complex Acquisition Transaction With Senior and Subordinated Debt Characterization in Issue - Jack Townsend, Federal Tax Procedure (discussing the Chicago Tribune Tax Court case). "The transaction and specifically its 'debt' (real or claimed) components was very complex.  But, the Court was able to dig into the substance and apply the rules in a measured way.  I am not saying that I believe the Court correctly applied the rules.  The debt-equity distinction is notoriously indeterminate in many cases.  I imagine that, in most cases, different courts could slice and dice the factors and reach different conclusions on the same set of facts. "

State Tax Ballot Measures to Watch on Election Day 2021 - Jared Walczak, Katherine Loughead, Ulrik Boesen, Janelle Cammenga, and Timothy Vermeer. "Of particular note, through 10 ballot measures across four states—Colorado, Louisiana, Texas, and Washington—voters will decide significant questions of state tax policy. We summarize each of these ballot measures below, and link to more extensive discussions of the five most significant measures."

Audit finds tiny McCallsburg, Iowa — population 350 — mishandled nearly $90,000 over 5-year period - Danielle Gehr, Ames Tribune. "Among the tens of thousands of dollars of taxpayer funds, thousands of dollars in utility bill reductions were allegedly made for dozens of the town's residents..." including the mayor and a city council member.

Related: How to Prevent Fraud in Your Government