Democratic Senate negotiators are homing in on a final proposal to tax the nation’s wealthiest individuals and families as a principal source of revenue for a major human infrastructure spending bill.

It's not clear how these "billionaires" would be singled out. One discussed provision would deem taxpayers with $100 million in income in three consecutive years to be billionaires, but current tax law has no mechanism for determining the net worth of individuals or couples on an ongoing basis.

Taxing Billionaires to Pay for Biden’s Agenda: What to Know About the Democrats’ Plan - Richard Rubin, Wall Street Journal ($):

A plan pitched by Sen. Ron Wyden (D., Ore.), outlined in a white paper from 2019, would create a one-time tax on unrealized gains to date. So someone who started a company and is now worth $50 billion could owe taxes on that entire gain, even before the annual taxes apply to future asset appreciation. Democrats are expected to allow that payment to happen over several years and may offer a discounted rate to avoid the market disruption of company founders selling their stock to pay the tax.

The plan is likely to allow affected taxpayers carry losses forward and perhaps backward to use as deductions against gains. The exact details aren’t set yet, but, for example, someone who had a $2 billion paper loss in one year could shield the first $2 billion in paper gains against taxes in the following year

"Perhaps" backwards? if not - A start up zooms in value in year 1, making a tax billionaire, who then has to liquidate part of the start up to pay billionaire tax. In year 2 another startup wrecks her business model, her company dies, and her stock is worthless. No net income over two years, but the government still "perhaps" collects a billionaire tax.

The senior Democrats said party leaders were trying to advance new levies on the annual income and tradable assets of some of the nation's wealthiest individuals as alternatives to revenue-raising increases in the 21% corporate tax rate and 37% top individual rate. They said income surtaxes and levies on unrealized capital gains of wealthy individuals could move in a reconciliation bill, potentially without corporate and individual rate hikes, which have been criticized by uncommitted centrists, including Sen. Kyrsten Sinema, D-Ariz.

Senate Finance Committee Chair Ron Wyden, D-Ore., said the legislative text for his proposal to tax the unrealized gains of the wealthiest Americans would be out in “a matter of days” and insisted the measure would be written in a way to withstand a constitutional challenge.

Meanwhile, Sen. Joe Manchin III, D-W.Va., a key Senate moderate, said October 25 that he expects Democrats will agree on a framework for their reconciliation bill by week’s end. An agreement on the reconciliation bill could be enough for House progressives to release their hold and allow a vote on the $550 billion bipartisan infrastructure package (H.R. 3684) this week.

How this week can end up: (Punchbowl News)

→ Option 1: There’s a topline deal on BBB sometime today or tomorrow. Biden would then come to Capitol Hill to try to sell the deal and ask for all House Democrats to vote for the bipartisan infrastructure bill. This would be a high-stakes moment for Biden and House Democrats, since it’s clear that a deal on reconciliation isn’t that close.

→ Option 2: Somehow, in a miracle of miracles, they get a BBB deal today or tomorrow and text by Friday. The House stays in session and votes on that legislation over the weekend, followed by passage of the bipartisan infrastructure bill shortly afterward. It’s nearly impossible to us that this will happen, but since Pelosi and House Majority Leader Steny Hoyer haven’t formally thrown in the towel yet, we’ll mention it.

→ Option 3: No BBB deal, no infrastructure vote. Democratic leaders push everything back a week or two.

The specific idea now under consideration is being termed a “Billionaire’s Income Tax.” Developed by Sen. Ron Wyden (D-Ore.), who chairs the Senate Finance Committee, it would tax financial gains on all tradable assets annually, even if they have not been sold.

Experts believe the tax would net anywhere from $250 billion to $500 billion the first year, when it would have its biggest impact.

That may be optimistic. The Wall Street Journal reports ($) that House Speaker Pelosi says the tax "would likely generate somewhere between $200 billion and $250 billion in revenue over 10 years." For perspective, the fiscal 2022 budget for the federal government proposes spending of a little over $6 trillion, so even if it raises $500 billion, the tax would cover about one month of federal spending over ten years.

A Billionaire Tax And Repealing The SALT Cap (Temporarily) - Renu Zaretsky, Daily Deduction. "Democrats reportedly are considering a plan to repeal the 2017 cap on the state and local tax (SALT) deduction for 2022 and 2023 only. A group of Blue State Democrats has insisted on some SALT fix as their price for supporting Biden’s Build Back Better plan. The problem: Even a temporary repeal would be costly and would largely benefit high-income households."

Wyden’s Billionaire Income Tax Is Ambitious But Problematic - Steven Rosenthal, TaxVox. "Mark-to-market for billionaires is even harder. While only a few taxpayers would pay the new tax, many more would need to value all their assets annually, including their privately-held businesses. Taxpayers close to the line might move in and out of the new tax regime frequently. How would the IRS determine whether all billionaires filed properly?"

The Billionaire Tax: The Worst Tax Idea Ever? - Aswath Damodaran, Musings on Markets:

If the history of tax law is that there are always unintended consequences, the problem with this law is that the consequences are entirely predictable and mostly bad, and you and I, even though we are not in the billionaire club, will face them.
For those who view the tax code as an instrument to deliver pain, the only consolation prize will be that punishment is being meted out to those who "deserve" it the most, but I am afraid that it is a booby prize. With the billionaire tax, the intended targets will pay far less in taxes than you think they should and now that the door to unrealized profits being taxed has been opened, how do you know that you are not next on the target list?

If you can deduct unrealized losses, just how much revenue will the bill raise?  Might the wealthy be incentized to hold ever yet riskier assets in that case?  And how will debt assets be treated?  What exactly is equity anyway?  Do all options and derivatives positions have to be considered as well?  (If not there is a massive arbitrage opportunity, hold some assets with a big chance to take losses but hedge your position with derivatives.)

Has anyone estimated all this and figured it out?  Should we pass such a tax bill without such estimates and public debate?  Isn’t that kind of democracy “good”?  What would The Party of Science say?

Capital gains taxes: Proposed increase for the ultra-wealthy, an overview for the rest of us investors - Kay Bell, Don't Mess With Taxes. "Under current law, every property owner, regardless of income, pays tax on assets when they realize a gain from them, usually by selling them. This so-called wealth tax, however, would force the ultra-wealthy to pay tax on the value or their holdings, stocks as well as real estate, before realizing the gains."

Top Tax Rate on Personal Income Would Be Among Highest in OECD under Ways and Means Plan - Alex Durante and William McBride, Tax Policy Blog. "Individuals in six U.S. states and the District of Columbia would face top marginal tax rates higher than the average top rate in any OECD country. Taxpayers in New York and California would have the highest rates, at 61.2 percent and 59.7 percent respectively, while those in New Jersey, Hawaii, the District of Columbia, Oregon, and Minnesota would all have top tax rates in excess of the current OECD high of 55.9 percent found in Denmark and Japan. Even in states that forgo an income tax, such as Florida, taxpayers would have a top rate of 46.4 percent, which exceeds the top rates found in more than half of all OECD countries." 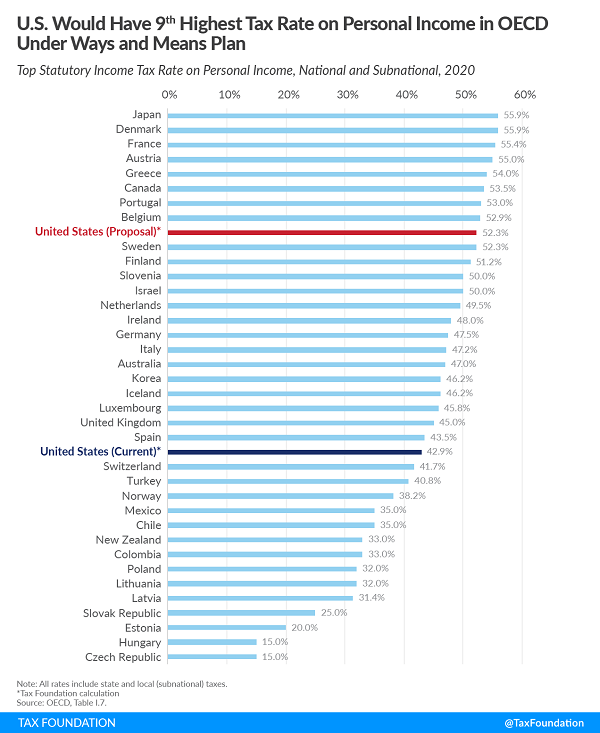 Tax History: The Bank Reporting Plan and Fear of an ‘Inquisitorial’ IRS - Josepth Thorndike, Tax Notes ($). "The problem for Democrats, however, is that reporting requirements can also prove unpalatable to actual voters. Americans have a long history with their tax collection agency, and while it has never been a warm one, it’s fair to say that it has gotten worse in recent decades."

Who's Afraid Of Bank Reporting To IRS? - Peter Reilly, Forbes. "There is grounds to be skeptical that the IRS will get much out of the new information source. In 2018 TIGTA reported that IRS was not taking advantage of currency reports generated under the terms of the oxymoronic Bank Secrecy Act. That was a follow-up on a 2010 report that had a similar conclusion. You can read about that here. Ironically the biggest impact seemed to be the prosecution of people for trying to avoid the bank reporting, a crime called structuring."

Nonprofit Tax Reporting Issues to Consider with Special Events - Kim Hunwardsen, Eide Bailly. "Ticket sales are reported for both GAAP and tax purposes as special event revenue when the cost of the ticket is comparable with the benefit received (e.g. meals, entertainment, greens fees). However, if the price of the ticket includes a contribution portion (e.g. the amount paid is greater than the benefit received) the amount in excess will be treated as contribution revenue for tax purposes with the remaining amount reported as special event revenue."

Des Moines church fights IRS over ‘religious’ use of hallucinogenic drug - Clark Kauffman, Iowa Capital Dispatch. "The church’s teachings are built around the use of ayahuasca, which is brewed from the leaves of the shrubs and vines found in the Amazon. Elements of those plants have powerful hallucinogenic properties, which the church says can be used to awaken 'the Third Eye' of its followers."

However many eyes you have to look at it, it appears that the church is housed in a nice split-level.

Georgia man got COVID relief loan — and spent $57,000 of it on Pokemon card, feds say - Hayley Fowler, Macon.com. "It wasn’t clear in court filings which Pokemon card [the defendant] is accused of purchasing, but certain rare and valuable Pokemon cards can sell for thousands of dollars.

Pie! Today is National Pumpkin Day. Why today? I have a theory (via Wikipedia): "The Great Pumpkin was first mentioned in the [Peanuts] strip on October 26, 1959."