Democrats have a Kyrsten Sinema problem when it comes to raising taxes.

As they seek to finalize President Joe Biden’s social spending plan by the end of the week, Sinema (D-Ariz.) remains opposed to one of the party's chief goals of raising tax rates on high-income earners and corporations, a long-sought objective since former President Donald Trump signed his 2017 tax cut law.

Now, party leaders are working behind the scenes to target the wealthy and corporate America without crossing what increasingly appears like a red line to Sinema, according to Democratic lawmakers and aides following the bill.

Also:  "Among the options under discussion to satisfy Sinema include targeting hundreds of billionaires who don’t pay taxes on their unrealized gains — a move that's known as 'mark to market.'"

Sen. Kyrsten Sinema (D., Ariz.) has previously told lobbyists that she is opposed to any increase in those rates, according to a person familiar with her remarks, but her stance is now pushing Democrats to plan more seriously for a bill that doesn’t include those major revenue increases.

Other planks of President Biden’s tax agenda, including tightening the net on U.S. companies’ foreign earnings and enhancing tax enforcement by the Internal Revenue Service, are still on the table, according to one of the people.

This isn't the first indication that Senator Sinema opposes rate increases, but it does confirm prior reports. This could leave tinkering with the tax code as the only way to get any part of the Biden budget agenda through a closely-divided Congress - if even that can work.

Instead, Biden’s advisers said that they are pursuing a range of ideas that could still raise substantial sums of money from corporations and the rich, including a tax on billionaires’ assets that would resemble a more modest version of the wealth tax championed by Sen. Elizabeth Warren (D-Mass.).

Biden aides on Wednesday also discussed a new minimum tax on corporations; a plan to beef up tax enforcement through the Internal Revenue Service; a tax on companies issuing stock “buybacks” to company shareholders; and an overhaul of international tax provisions aimed at raising minimum taxes on multinational firms, the people said.

These provisions are likely to be as well-crafted as hastily-drafted political gestures drafted in secret usually are.

Down to the wire on budget bill as Democrats haggle over details - Lindsey McPherson, Mary Ellen McIntire, and Laura Weiss, Roll Call:

And given Sinema's opposition, top Democrats were mulling whether to revisit higher tax rates on individuals and corporations that have been considered a done deal as offsets.

Some ideas that have been floated on the Senate side that could fit the bill are a tax on stock buybacks, a minimum corporate tax based on income reported to shareholders and a levy on billionaires' assets, according to a source familiar with the talks.

Reportedly, Democrats are planning on allowing at least four of their policies to expire after one to three years, instead of establishing them permanently. The expansions to the child tax credit, the Affordable Care Act, Medicare, and Medicaid⁠ will all be temporary.

Taken at face value, this is an awful idea; setting up a bunch of programs quickly only to dismantle them is inefficient. But if you read between the lines, understand the political strategy, and examine the economic context—you find it’s still an awful idea.

Sinema posing challenge for Democrats' tax-hike plans: reports - Naomi Jagoda, The Hill. "Democrats had been counting on tax-rate increases as a key way to pay for spending and tax cuts in areas such as child care, education and climate. The House Ways and Means Committee last month approved legislation that would increase the top individual income tax rate from 37 percent to 39.6 percent, raise the corporate tax rate from 21 percent to 26.5 percent and raise the top capital gains rate from 20 percent to 25 percent."

Manchin’s Child Credit Work Requirement and Income Cap Leave Many Questions Unanswered - Howard Gleckman, TaxVox. "It isn’t easy to parse a legislative proposal from one sentence in a news story, but Manchin seems to be proposing fundamental changes in the CTC and opening a messy can of legislative worms. Whether you think a work requirement and a $60,000 income cap are good policies or not, turning his idea into an actual bill would be a serious challenge."

The proposal would require financial institutions to send a report to the Internal Revenue Service (IRS) of gross inflows and outflows for each bank account. Reports would not look at specific transactions but would be broken down into categories including physical cash, transactions with foreign accounts, and transfers to and from another account with the same owner. The requirement would apply to all accounts with at least $600 in gross inflows or outflows, or with $600 in fair market value. As negotiations over details of the reconciliation package have continued, Democrats are expected to shift that threshold to $10,000.

Rosenthal instead suggested a proposal (originally suggested by former IRS Commissioner Charles Rossotti) to require individuals earning at least $25,000 in business income and pass-through businesses with at least $25,000 in receipts to designate separate bank accounts for their business activities. Banks would then provide taxpayers and the IRS statements at the end of the year, after which taxpayers would reconcile the report of deposits and withdrawals with their tax return. This approach would be less broadly intrusive, and better focused on where high rates of noncompliance are. 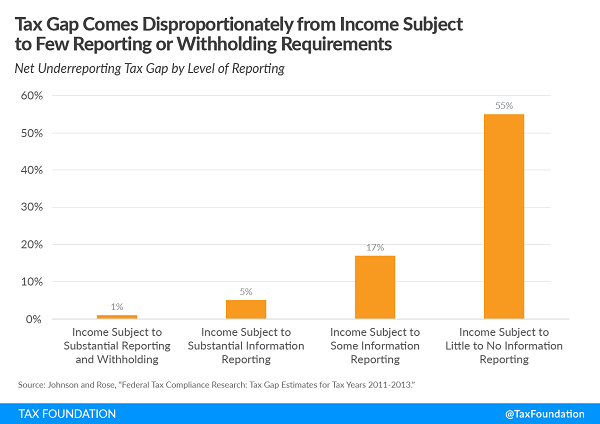 Global Tax Agreement May Shake Up Taxation of Multinational Enterprises - T.L. Fahring, Freeman Law. "Under Pillar One, taxing rights over 25% of the residual profit of the most profitable MNEs will be allocated to the countries where goods or services are used or consumed."

IRS Tax On Legal Settlements Depends On Wording - Robert Wood, Forbes. "However, the settlement agreement said it was only for alleged legal malpractice, and explicitly was not for any personal physical injuries. In short, it did the exact opposite of what would have been helpful tax language."

IRS Releases Update on Frequently Asked Questions Part 2 - James Creech, Procedurally Taxing. "The IRS has stated that in the near future it would begin archiving all FAQs and would release more formal guidance about reliance on FAQs for the purposes of penalty protection.  Until then this press release will have to suffice about the interaction of FAQs, weight of authority, and penalty protection."

IRS Can't Assess Underpayment Interest Where Overpayment Credits Exceed Deficiency - Parker Tax Publishing. "Although the taxpayer's overpayments exceeded the 1984 and 1985 deficiencies and were not needed to pay its taxes in subsequent years, the IRS nonetheless charged underpayment interest on the deficiencies."

Seventh Circuit Affirms That Taxpayer Does Not Qualify for Claim of Right Relief for a Transaction Related to Grantor Trust - Ed Zollars, Current Federal Tax Developments. "The third-party trustee sold assets that were not allowed to be sold under the terms of the trust."

Is Progressive Taxation All About Envy? - Joseph Thorndike and Robert Goulder, Tax Notes Opinions. "That sounds a little bit like a pedantic point, Joe. It's almost like you're trying to define envy out of existence."

VITA help generally is available to taxpayers making $58,000 or less. Eligible VITA clients also include people with disabilities and those whose who are not proficient in or comfortable speaking English.

The companion TCE program is mainly for people age 60 or older. That's why many TCE sites are operated through AARP Foundation Tax-Aide. And although the program focuses on tax issues unique to seniors, most taxpayers can usually get free assistance.

VITA volunteers perform a thankless and amazing service. It's hard enough to do taxes for a living, let alone for free.

Overzealous advocacy? "A former employee with the Taxpayer Advocate Service at the Internal Revenue Service has been charged with filing false tax returns while on the job and trying to obstruct agency investigations, the U.S. Department of Justice said Wednesday." - Theresa Schliep, Law360 Tax Authority ($).

Congress is in session. It's National Reptile Day. Totally unrelated.