President Biden told Democrats during a private meeting Tuesday that he believed they could secure a deal on a new tax-and-spending proposal between $1.75 trillion and $1.9 trillion, far less than some in the party initially sought, even as some lawmakers later maintained it still would allow them to accomplish broad swaths of their vast economic agenda.

Some congressional sources cautioned that many of the ideas aired by the White House remain in flux, reflecting considerable work still on the horizon to craft a deal and sell such a scaled-back package to an increasingly fractious Democratic caucus. Biden also did not broach the issue of how to finance the new spending, leaving unresolved the fight over his proposal to raise taxes on wealthy Americans and corporations. He previously pledged it would be paid for in full.

A proposal to subsidize two years of free community college is likely out. Tax credits expanded in the March coronavirus relief law to help families pay for health insurance and raising children won’t be extended for as long as most members wanted. A key proposal for pushing utility companies to switch to renewable energy sources needs to reworked or replaced to appease Sen. Joe Manchin III, D-W.Va.

Progressives want to keep most programs in the bill but fund them for shorter periods. Many moderates want to fund fewer programs but make them permanent or long enough to be fully implemented and gain traction with the public.

Leading Senate tax-writer intros IRS reporting requirement for tax and spending bill - Jay Heflin, Eide Bailly: "Senate Finance Chairman Ron Wyden (D-Ore.) on October 19th introduced an enforcement proposal that would require banks to report to the IRS annual transactions totaling at least $10,000.  The aim is to include this measure in the budget reconciliation bill that is currently stalled in Congress."

Democratic leaders in Congress would like to pass the budget reconciliation bill and the infrastructure bill by October 31st. Given the number of outstanding issues with the reconciliation package (Sinema and Manchin aren’t the only ones with problems), it seems like a tall order to meet this goal.

That being said, if Democratic leaders miss the October 31st deadline, they risk looking like they can’t govern – which could haunt them in the 2022 elections.

It's hard to believe that a Congress controlled by the President's party will be unable to pass significant parts of his agenda. Yet it's not obvious how to put together legislation that will get the votes of every Senate Democrat and almost every Democratic representative.

Democrats pare back proposed IRS bank reporting requirements - Bernie Becker and Ursula Perano, Politico. "But even some Democrats believed that proposal wasn’t focused enough on the rich and would affect too many workers of more modest means."

Statement by Secretary of the Treasury Janet L. Yellen on Congressional Tax Compliance Proposals - Janet Yellen, U.S. Department of the Treasury. "Today’s new proposal reflects the Administration’s strong belief that we should zero in on those at the top of the income scale who don’t pay the taxes they owe, while protecting American workers by setting the bank account threshold at $10,000 and providing an exemption for wage earners like teachers and firefighters."

“Build Back Better” Progress? - Renu Zaretsky, Daily Deduction. "After meeting with President Biden yesterday, Democrats showed some signs of narrowing their differences on a major social spending and tax bill. Biden told Democrats he’s aiming for a deal of about $1.75 trillion to $1.9 trillion, far less than the $3.5 trillion progressives wanted but still ambitious. Democrats appear to be retaining many original provisions but in scaled back form. Senate Majority Leader Chuck Schumer said he hopes to have agreement on a framework by the end of the week."

Democrats appear to be narrowing the spending side of their bill to family-aimed benefits like a child tax credit, along with what are currently unclear climate provisions that might include a carbon tax or perhaps a polluter’s tax based on emissions.

While the House Budget Committee’s $3.5 trillion reconciliation bill appears to now be a relic, the question is how much will Democrats have to cut to win the support of moderates without losing the support of progressives.

While a carbon tax has support among economists, the resulting increase in fuel costs makes it politically iffy. A carbon tax would have to be accompanied by some sort of income-based rebate to avoid shattering President Biden's promise to not tax those with under $400,000 in income. That's a lot to figure out in the few weeks available for passing a reconciliation bill. Also:

Besides the differences within the Senate Democratic Caucus, there is also the difference in approach with the House, which is pushing a more traditional, albeit huge, assortment of energy tax preferences amounting to $273 billion over 10 years.

Sen. Joe Manchin’s position on the child tax credit has proved an obstacle for Democrats as they craft their social spending package, with both progressives and fellow moderates taking issue with the West Virginia Democrat’s stance.

Manchin said that he wants there to be work requirements for the credit. He has also indicated he thinks there should be “means testing” to lower the income limits for the expanded credit.

What’s Going on with the Child Tax Credit Debate? - Alex Durante and Erica York, Tax Policy Blog. "The expansion of the credit will significantly reduce the number of children living in poverty, which may have positive long-run effects, but the expansion will have unintended consequences too. In particular, removing the participation bonus and increasing marginal tax rates on earned income reduces incentives to work, which may partially counteract the reduction in poverty." 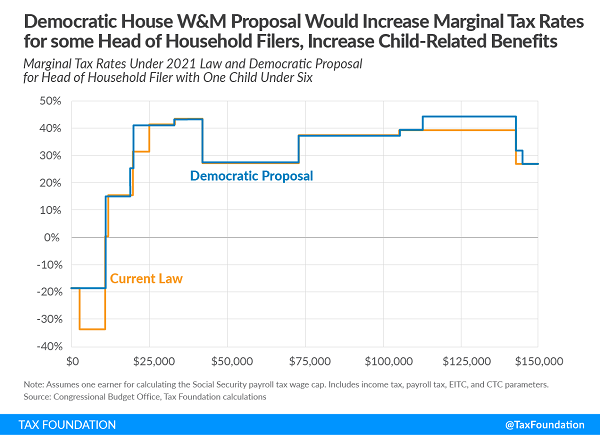 This chart only includes federal benefit phase-outs. State taxes and the loss of state and local welfare benefits as earned income increases can make earning more a taxing effort.

Grassley Dismisses Criticism of Retroactive Easement Proposal - Kristen Parillo, Tax Notes ($). "A proposal to retroactively disallow deductions claimed by investors in syndicated conservation easement deals merely clarifies that those deductions were never permitted under tax law, according to Senate Finance Committee member Chuck Grassley, R-Iowa... The provision would deny a section 170 charitable contribution deduction if it exceeds 2½ times the taxpayer’s relevant basis in the passthrough entity that donated the easement"

Real Estate Pros Look To Nix Clients' Easement Tax Fraud Suit - Theresa Schliep, Law360 Tax Authority ($). "The clients were told to seek external advice on the investments they were making in exchange for tax breaks and were warned about the risks of Internal Revenue Service audits, according to the motion to dismiss. They consequently can't sue the real estate professionals after the IRS audited the partnership returns claiming the breaks and disallowed the deductions, the professionals argued."

The clients said the real estate groups and professionals overvalued properties they sold to participants in the schemes, and the deductions were then distributed to participants based on their interest in the syndicate.

But the IRS ended up auditing partnerships used as vehicles for the schemes and ultimately denied the deductions. Those clients have challenged the IRS' findings in the U.S. Tax Court, which has thus far sided with the agency in two of the suits, according to the complaint.

If an investment only makes sense because it provides tax deductions, it just might not make sense.

Voluntary Disclosures on Withholding Are Up, IRS Official Says - Amanda Atahanasiou, Tax Notes ($). "Kimberly Schoenbacher, director of field operations (foreign payments practice and automatic exchange of information) at the IRS, suggested that the influx of submissions might be attributable to notices sent to withholding agents as part of an IRS campaign on withholding noncompliance that began in June 2019. Some of those letters were educational in nature, and some asked withholding agents to reconcile payments made with Form 1042 reports, she said October 19 at the virtual Global Tax Reporting Symposium hosted by the Securities Industry and Financial Markets Association and the Wall Street Tax Educational Corporation."

Form 1042 covers withholding required on certain remittances made to non-U.S. persons, including interest, dividends, and rents.

The End Is Nigh: An Update on the OECD Tax Reform Plan - David Stewart and Stephanie Soong Johnston, Tax Notes Opinions. "Will the U.S. be able to push legislation to implement pillars 1 and 2 through Congress? The Biden administration has a pretty thin majority in the Senate and in the House of Representatives, so it's an open question now. Will the U.S. be able to make good on its promises that it can deliver on implementing pillars 1 and 2? As everyone knows, the U.S. is pretty important to have on board to ensure the effective implementation of both pillars."

More disasters mean more catastrophe-related scams, including charitable tax donation deduction ploys - Kay Bell, Don't Mess With Taxes. "Every time there is a catastrophe, these crooks crank up the cons. Scammers have always known that generous individuals are easy marks."

Take your time. It's both International Sloth Day and National Day on Writing. These can be combined: "True, nothing’s quite as scary as staring at a blank page, but you can do it. Start slow."