IRS Makes Seismic Shift on How to Claim Research Credit Refunds - Kristen Parillo, Tax Notes ($). "An IRS memorandum detailing the level of information needed to file a valid research credit refund claim is being slammed as creating an unduly burdensome filing regime that could negate the credit’s value."

The memo states that at least five pieces of information must be provided to the IRS for section 41 research credit refund claims to be valid. The taxpayer must identify all business components to which its claim relates for that year. For each business component, the taxpayer must identify all research activities performed, all individuals who performed each research activity, and all the information each individual sought to discover.

Because the guidance provides stricter standards for refund claims on amended returns, it increases the incentives for taxpayers to get the credit right with their original returns. The article says the IRS won't apply the new standards until January 10, 2022, which gives taxpayers a little time to complete a research credit study and refund claim under the current rules.

Related: The Benefit of the Research & Development Tax Credit for Manufacturing and Construction Entities.

Memorandum Outlines Minimum Information That Will Be Required for a Research Credit Refund Claim to Be Accepted - Ed Zollars, Current Federal Tax Developments. "Existing Treasury Regulations require that for a refund claim to be valid, it must set forth sufficient facts to apprise IRS of the basis of the claim. The Chief Counsel memorandum will be used to improve tax administration with clearer instructions for eligible taxpayers to claim the credit while reducing the number of disputes over such claims."

Democrats to scale back Treasury’s IRS bank reporting plan amid GOP uproar - Jeff Stein, Washington Post ($). "After a backlash, the new proposal will instead require the provision of additional information for accounts with more than $10,000 in annual deposits or withdrawals, a measure Democrats have been considering for weeks but have not formally endorsed, the people said."

Manchin opposes the program, which would provide subsidies to utilities that shift to renewable energy sources like solar, wind and nuclear and meet certain emission targets while penalizing those that don’t, and said he thinks energy companies are already making the transition. West Virginia is a top producer of coal and natural gas -- energy sources that would likely draw penalties under the proposed program.

Some Senate climate hawks begrudgingly acknowledged Monday that the CEPP may not make it into the final package and that Democrats are discussing alternative proposals.

Extension of the expanded child tax credit has been at the center of negotiations over the congressional reconciliation bill, as Manchin and fellow moderate Sen. Kyrsten Sinema, D-Ariz., have insisted that the bill’s original $3.5 trillion price tag be cut.

Several senior Democrats said manufacturing tax incentives for targeted industries had good prospects for being included in a smaller version of the pending $3.5 trillion House reconciliation bill. They said such incentives could help address concerns of divided lawmakers and rally support for a bicameral deal on the legislation.

Cardin said incentives for certain types of products could be included in the reconciliation bill in order to broaden support for the measure. He said many lawmakers also backed efforts to revive Biden's proposal on the 2020 campaign trail for a "Made in America" tax credit to cover about 10% of a company's qualified expenses for moving foreign production to a U.S. factory.

Lobbyists will work hard to make sure their clients are "targeted."

S Corporations - Reasonable Compensation; Non-Wage Distributions and a Legislative Proposal - Roger McEowen, Agricultural Law and Taxation. "If the legislative proposal is enacted into law, it would significantly change the taxation of pass-through entities and owners that have AGI above the $400,000 threshold.  The technique of reducing employment tax by managing compensation levels withing the boundaries set by the IRS and the courts would no longer be a viable strategy."

Texas Customs Broker Owes $835K FBAR Fines, Gov't Says - Kevin Pinner, Law360 Tax Authority. "The IRS computed that amount by imposing on Taxpayer the maximum penalty for nonwillful failure to file Reports of Foreign Bank and Financial Accounts, equal to $10,000 per account per year, plus interest and statutory additions. In March 2011, Taxpayer filed an FBAR for the 2010 year but only reported two accounts held in his name. The government's complaint alleges Taxpayer had 10 bank accounts in Mexico during that year. The IRS says Taxpayer had between nine and 11 bank accounts in Mexico during the other relevant years."

And that's for a "nonwillful" failure to report. Imagine if they thought he meant it.

Part Of Build Back Better Could Be Disaster For Trust Owned Life Insurance - Peter Reilly, Forbes. "Basically, I don't think that there are many people who believe that there is anything abusive about structuring the ownership of life insurance policies to not be included in your estate. And if this provision passes, many people with ILITs or their heirs will be blindsided by it."

International Tax Competitiveness Index 2021 - Daniel Bunn and Elke Asen, Tax Policy Blog. "For the eighth year in a row, Estonia has the best tax code in the OECD. Its top score is driven by four positive features of its tax system. First, it has a 20 percent tax rate on corporate income that is only applied to distributed profits. Second, it has a flat 20 percent tax on individual income that does not apply to personal dividend income. Third, its property tax applies only to the value of land, rather than to the value of real property or capital. Finally, it has a territorial tax system that exempts 100 percent of foreign profits earned by domestic corporations from domestic taxation, with few restrictions."

The U.S. comes in at 21st out of 37 countries rated. Tax changes under consideration now would cement a bottom tier ranking. 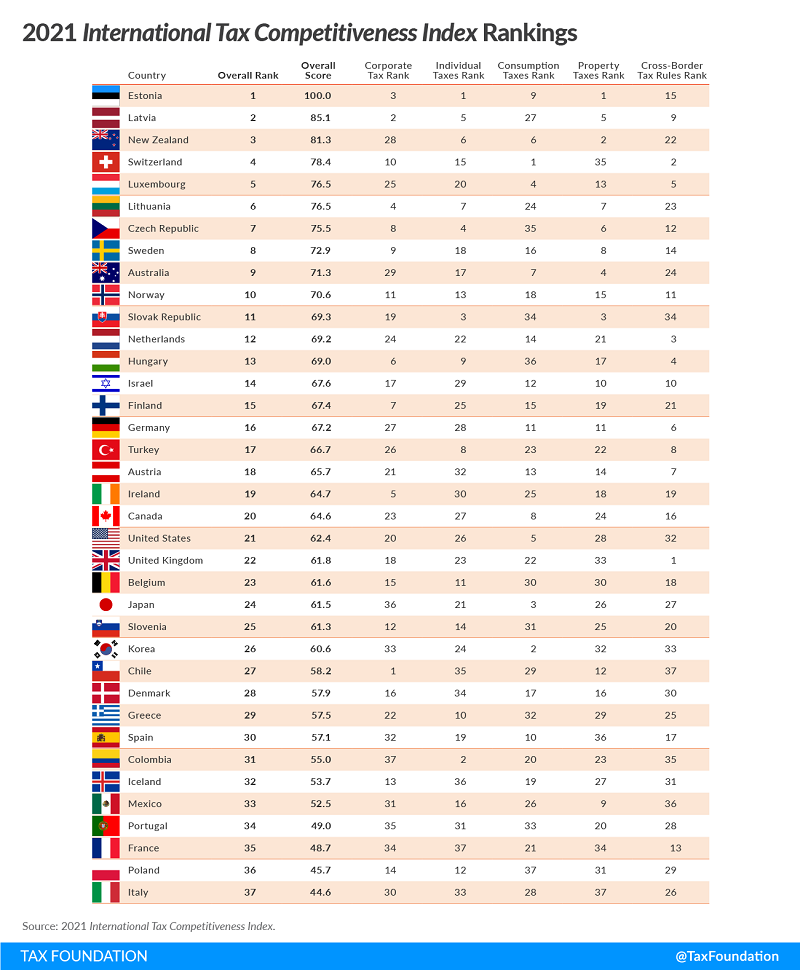 In 2019, California only partially conformed to the section 1031 changes made by the Tax Cuts and Jobs Act. For individuals below speified AGI levels in the year an exchange begins, the pre-TCJA version applies. These levels are under $500,000 of AGI for MFJ and HH and under $250,000 for single.
Besides real property, what might individuals exchange? Well today, the most common non-real property exchanged by the roughly 95% of Californians who are still subject to section 1031 is cryptocurrency! Many types of virtual currency can only be acquired with bitcoin or another virtual currency.

This only works for California taxes. Californians do not get federal Sec. 1031 tax deferral for cryptocurrency swaps.

Will a high-deductible health care plan work for you?... If you do opt this open enrollment season for HDHP coverage, you'll also want to check into establishing an associated health savings account, or HSA. You put money into the HSA, where it grows tax-free. Then you can make tax-free withdrawals for qualified medical expenses. For 2022, you can put up to $3,650 into your HSA if you're a single taxpayer or $7,300 if the coverage is for families with high deductible health plans. There's also a $1,000 add-on for 55 or older HDHP plan owners.

As noted in the Tax Notes Story On FAQs, the announcement doesn’t go so far as to actually update the very much out of date accuracy related penalty regulations (particularly reg. sections 1.6662-4 and 1.6664-4), “but it does state that FAQs published in fact sheets will satisfy both the reasonable cause defense to tax penalties that allow it and can be part of a taxpayer’s assertion of substantial authority on a tax return. It also says that the FAQs and any resulting changes to them will be announced in news releases.”

During the early days of COVID, the IRS used FAQs to provide quick guidance, but with no guarantee that taxpayers who used the guidance could avoid penalties if the IRS changed its mind. They also would change FAQs without telling anybody.

The IRS and Private Collection Agencies: Four Contracts Lapsed and Three New Ones Are in Place: What Does That Mean for Taxpayers? - NTA Blog. "PCAs do not have the same authority to resolve taxpayers’ debts that the IRS does."

Norwalk Man Sentenced to Prison for Tax Evasion - US Department of Justice. "According to court documents and statements made in court, Taxpayer operated a construction business known as Taxpayer Construction. From 2008 through 2013, Taxpayer owed substantial unpaid income taxes and penalties to the IRS. In 2014, the IRS levied the business bank account used by Taxpayer as the operating account for his construction company. Taxpayer subsequently closed his business bank account and, between approximately November 2014 and November 2017, evaded payment to the IRS of his preexisting tax obligations by using a check cashing service to cash approximately $1.5 million in customer checks paid to his business."

I wonder if he claimed business mileage for his trips to the check cashing service.