Several senior Democrats said a trio of graduated corporate rates in the House bill would satisfy demands by some lawmakers for small-business incentives, while negotiators try to cut a bicameral deal on a smaller version of President Joe Biden's domestic agenda. Although the House plan would raise the corporate rate to 26.5% for businesses with more than $5 million in income, it would cut the rate to 18.5% for those earning $400,000 or less and retain the current 21% rate for those earning between $400,000 and $5 million.

Climate change provisions in a sprawling Democratic spending package are dividing moderates, creating major obstacles to getting the legislation across the finish line.

The divisions among moderates largely reflect regional interests, underscoring the challenges to getting the moderate wing of the party on board with the multi-trillion dollar spending package. Every Democratic senator and nearly every House member will need to vote for the final legislation to get it to President Biden’s desk.

Key aspects of the House package would make sweeping changes to address climate change, through tax credits for clean energy and electric vehicles, a fee on methane emissions from oil and gas, and a program that seeks to switch electricity to clean energy sources through a combination of grants and fines.

It's just possible that the solution for climate change may not be found in the tax law.

‘Damned if you do, damned if you don’t’: Dems plagued by debt déjà vu - Burgess Everett, Sarah Ferris, and Heather Caygle, Politico:

In the interim, the only offer McConnell has for Democrats is to use the next few weeks to prepare a long-term debt increase and pass it in December.

He’s “giving the Democrats the time they’ve asked for. Their only argument for not doing this through reconciliation is they didn’t have time, too many hurdles. Now they have plenty of time,” said Sen. John Barrasso (R-Wyo.).

The problem? Senate Democrats say they aren’t going to use their newfound breathing room to work on the debt ceiling, even as more House Democrats hint they’d be fine with acceding to McConnell.

Instead, Senate Democrats say they’re focused on clinching a deal on Biden’s social spending bill. But negotiators remain far apart on even a topline agreement, as lawmakers openly war with each other over both the size and scope of the social infrastructure package.

Breaking Down the Plan to Report Your Bank Account to the IRS - Kelly Phillips Erb, Bloomberg:

This is the part that is worrying taxpayers. Reports would include numbers of cash transactions per account, any transactions with a foreign account, and transactions between accounts held by the same owner. But, according to Treasury Secretary Janet Yellen, “this is not a proposal to provide detailed transaction-level data by banks to the IRS.”

In other words, no one at IRS will see how many times you’ve ordered “27 Dresses” on Amazon.

Higher Taxes Under House Ways and Means Plan Emphasize Need for Corporate Integration - Alex Durante, Tax Policy Blog. "Under the House Ways and Means plan to raise taxes on corporations and individuals, the integrated tax rate on corporate income would increase from 47.4 percent to 56.6 percent—the third highest in the OECD. To reduce this burden, policymakers could explore integrating the individual and corporate tax systems. Several developed countries have done this to reduce or completely eliminate the double taxation of corporate income." 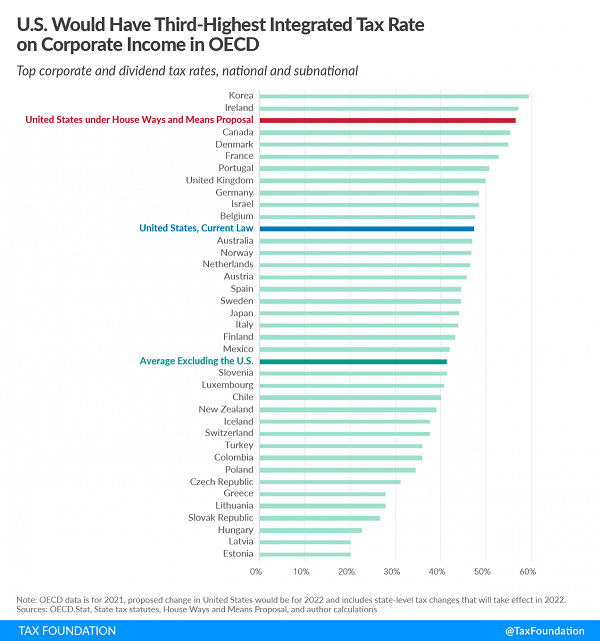 A pro se individual will struggle to take the correct procedural steps.  A disabled and sick pro se individual will struggle even more.  The law does not need to require such precision that she must file with her claim a full blown statement as required by the Rev. Proc. and the Rev. Proc. does not need to make the requirements as draconian as it does.

"Financial disability" is invoked to protect taxpayers unable to comply with tax deadlines because of, for example, dementia. It appears that the IRS wants you to be both disabled and legally nimble to qualify.

How do low real interest rates affect optimal tax policy? - Tyler Cowen, Marginal Revolution. "One of my biggest worries about a wealth tax is that it takes resources away from people who at the margin seem to be good at generating extra-normal returns.  That comparative advantage might be more important as the safe rate goes to zero."

One more reason to omit taxpayer names here. Careful readers may have noted that we generally omit taxpayer names when discussing tax cases. Doing so helps to limit time-consuming interaction with self-Googlers who feel they have been wronged. It avoids adding to a bad internet record for people who made a mistake and are trying to move on. And it usually isn't needed to pass on the key points of the tax law.

A district court has rejected a man’s claim that the IRS violated the copyright he owns on his name when it assessed him with a fine for filing a frivolous return.

In its October 13 order... the U.S. District Court for the District of Arizona dismissed as frivolous [taxpayers] amended complaint against the IRS, in which he claimed that the agency lacks the authority to impose a $5,000 fine on him for his 2020 tax return and that it committed copyright infringement by assessing the fine against him. He was seeking $500,000 in damages from the IRS.

The taxpayer makes some Big if True claims. From the opinion [my emphasis]:

While styled as a copyright infringement action, the heart of Plaintiff’s amended complaint seems to be a challenge to the authority of the IRS to impose fines on him. See Doc. 6 at 5 (“I am seeking a court Order to dismiss the defendants[’] fine of $5,000 and give Plaintiff a judgment of $500,000 for copyright infringement.”). Plaintiff asserts that the IRS lacks the authority to fine him because he has copyrighted his name and the IRS infringes that copyright by attempting to fine him using his name. Id. at 4 (“I think I can fine [the IRS] $500,000 for the use of my NAME to make money by their arbitrary and capricious fine[.]”). Plaintiff apparently thinks the IRS authority to fine him comes from a lien he asserts was filed by the IRS “on all men with arms and legs in the united states, liening [sic] on all corporate persons in the amount of $14 quadrillion dollars.” Doc. 6 at 5. Plaintiff asserts that this alleged lien was filed three and a half years after he filed his Common Law Copyright Notice and thus his copyright preempts any lien the IRS has on “all men with arms and legs.” Id. He attaches to his complaint as exhibits this putative lien.

Tomorrow is the extended 2020 1040 deadline. If you want to get out your $14 quadrillion lien, it looks like you should file by then, as the copyright thing seems to not quite work.

Indulge. It's National Dessert Day! But not until you get your e-file authorizations to your preparer for your extended returns due tomorrow!