But it’s two proposals concerning steps to avoid taxes on substantial assets once they’re inherited that advisors are most worried about.

One proposal would effectively kill the use of grantor trusts, a staple strategy for the rich to shift million-dollar assets, such as life insurance, real estate and business holdings, out of a taxable estate, come 2022. Existing trusts would be “grandfathered” but face tight restrictions. The second proposal would slice in half the income levels at which the 40% estate tax would kick in, also starting next year.

A barrage of tax proposals from House Democrats targeting trusts would wipe out a swath of estate tax planning techniques and shift the planning focus from the estate tax to the income tax.

Tax professionals say that the proposed changes to the tax treatment of grantor trusts would be significant on their own, but when coupled with the squeeze on trusts and estates scattered throughout the rest of House Democrats’ reconciliation legislation, the cumulative effect would be transformative for the tax planning industry.

While the proposed reduction in the estate and gift tax exemption would kick in January 1 of next year, many the trust changes would be effective on the date of enactment. This adds urgency to any plans to use trusts as gifting tools this year.

House Speaker backs including increased bank reporting in reconciliation bill - Jay Heflin, Eide Bailly.  "House Speaker Nancy Pelosi (D-Calif.) said on October 12th that she supports requiring banks to report to the IRS transactions over $600 to curb tax evasion, and that the provision should be included in the budget reconciliation that is currently stalled in Congress."

Pelosi defends IRS bank-reporting proposal, says specifics open to negotiation - Naomi Jagoda, The Hill. "Democratic lawmakers have a tentative deal to raise that threshold to $10,000, and to exempt regular wage payments. Pelosi noted in her comments that the $600 threshold is not set in stone."

House Speaker Nancy Pelosi (D-Calif.) on Tuesday sought to steel Democrats for coming cuts to their $3.5 trillion tax-and-spending package, stressing the process to whittle down the party’s landmark proposal would not “diminish the transformative nature of what it is.”

In a sign of a potentially widening, intraparty schism, top lawmakers in the Congressional Progressive Caucus on Tuesday said they remain steadfastly committed to the priorities they outlined in April to tackle issues including paid leave, climate change, housing, health-care reform and immigration. The leader of the bloc, Rep. Pramila Jayapal (D-Wash.), said they would rather authorize those programs for fewer years rather than remove some fully from the final bill to save money.

Instead of offering a program that should be cut, Pelosi said she’d first look to trim the duration of programs. The House package that 13 committees put together was written with the $3.5 trillion top line in mind. There is not yet an official Congressional Budget Office score, but some outside budget experts estimate it could total more than $4 trillion, although more than half would be offset.

Keeping more programs with earlier sunsets seemed to conflict with Pelosi's letter to House Democrats Monday night that said members “overwhelmingly” were suggesting the package “do fewer things well so that we can still have a transformative impact on families in the workplace and responsibly address the climate crisis.”

Progressive activists have adopted an aggressive, confrontational approach, epitomized by protesters following Sen. Kyrsten Sinema (D-Ariz.) into the bathroom and then traveling to Boston to hound her at the Monday marathon there, even though a foot injury kept her from running the actual race.

But climate and conservation groups as well as Building Back Together, the outside advocacy arm of the White House, have taken a different tack, pouring tens of millions of dollars in television ads running for months in battleground districts, which are largely positive in tone... Among the other top targets of ad spending are Democratic Reps. Cindy Axne of Iowa, Elissa Slotkin of Michigan and Jared Golden of Maine, according to AdImpact.

California FTB: Claim Golden State Stimulus Payments by October 15 - Tax Notes. "The California Franchise Tax Board reminded taxpayers that the deadline to file 2020 state personal income tax returns without penalty and to be eligible for Golden State Stimulus (GSS) payments as provided by recently enacted legislation is October 15; the FTB also reviewed eligibility requirements for the GSS and explained how taxpayers can file and make payments electronically using CalFile and Web Pay."

Based on the available information on pillar 1, “the changes needed weigh heavily in favor of a multilateral treaty or other formal bilateral tax treaty changes, as opposed to some form of legislative override or executive agreement,” Courtney Connell, senior tax counsel for Senate Finance Committee Republicans, said during an October 12 virtual conference held by the Tax Foundation and the European Tax Policy Forum.

Connell said some members are concerned that the Biden administration is considering trying to implement pillar 1 without going through the Senate treaty approval process.

Pillar 1 of the OECD’s two-pillar plan would amend profit allocation and nexus rules to give market countries the right to tax a portion of large multinational enterprises’ residual profits tied to sales in their jurisdictions, regardless of those enterprises’ physical presence.

The Congressional Budget Office (CBO) now estimates that the federal government received $370 billion in corporate tax revenue over the past year (fiscal year 2021), matching the record high level from 2007. This is a 75 percent increase over the previous year’s total, reflecting a rebound in corporate profits and the broader economy. 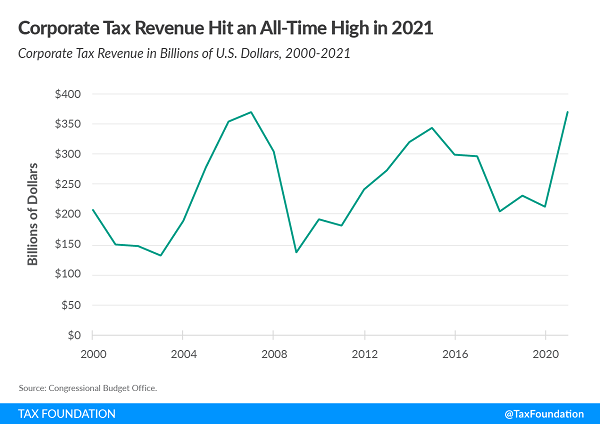 Reasons why you need to adjust your tax withholding now - Kay Bell, Don't Mess With Taxes. "Did you discover when you filed your taxes, either earlier this year or this week to get in under the Oct. 15 extended deadline, that you were due a refund? Or, yikes, that you owed Uncle Sam? Either way, now is a good time to review your tax withholding. With 2021's third quarter just under way, you have plenty of time to deal with the differences either way."

2021 Tax Planning: Tax Benefits of Cost Segregation - CCH Wolters Kluwer. "Business and individual taxpayers that acquire nonresidential real property or residential rental property have an opportunity to reduce the depreciable lives on assets which are building components. Certain assets may qualify for shorter lives and recovery periods under MACRS depreciation. The reduction of the asset lives provides accelerated deductions to offset income."

Employee retention tax credit (ERC) updates for 2020 and 2021 tax returns - National Association of Tax Professonals. "So, what does this mean for practitioners? This means practitioners may have clients who they initially thought were not eligible for the ERC (due to having received a forgivable PPP loan) are now eligible for the ERC. Similar to most tax- related items, no double dipping is allowed. Any wages that count toward eligibility for the ERC or PPP loan forgiveness can be applied to either the ERC or PPP loan forgiveness, but not both."

Dear Senators Crapo And Grassley: Synthetic Tax Data Protect Taxpayer Privacy - Leonard Burman, TaxVox. "Senators Mike Crapo (R-ID) and Chuck Grassley (R-IA) recently asked for an investigation into the Internal Revenue Service’s research activities, including its use of contractors to conduct studies and its  security protocols. The senators are right to be concerned about taxpayer privacy, especially after ProPublica’s recent articles about the tax situations of very high-income Americans based on a 'massive trove of tax information.'"

In Summons Dispute IRS Entitled to Confidential Emails Between Insurance Companies and State Regulator - Leslie Book, Procedurally Taxing. "In US v Delaware Department of Insurance a federal district court ordered the Delaware Department of Insurance (DDOI) to turn over emails associated with micro-captive promoters.  In tax cases it is somewhat unusual that the federal government finds itself in court with state attorneys as adversaries."

According to prosecutors, The Agent, 50, conducted a criminal tax investigation into the individual — identified only as John Doe — and used his personal information to create a false passport and an overseas corporate entity. The IRS investigation was later closed without charges, the government said.

The Agent bought a $1.65 million apartment on the Upper East Side using forged tax returns and bank statements, as well as money funneled from an account falsely associated with John Doe, according to the government.

The IRS is pushing for more authority to regulate preparers. This sort of success in managing their own employees suggests lowered expectations of their ability to regulate outsiders.

Set this one in stone. It's National Fossil Day! "Fossils aren’t just interesting and fun to look at — they’re also proof of the existence of once-living things (like dinosaurs, animals, plants and even DNA remnants)." And some of us still stride the Earth.