The Treasury Department and the Internal Revenue Service today released the last set of final regulations PDF implementing the 100% additional first year depreciation deduction that allows businesses to write off the cost of most depreciable business assets in the year they are placed in service by the business.

The 100% additional first year depreciation deduction was created in 2017 by the Tax Cuts and Jobs Act and generally applies to depreciable business assets with a recovery period of 20 years or less and certain other property. Machinery, equipment, computers, appliances and furniture generally qualify.

Related: What is Qualified Improvement Property and Why it Matters.

Supreme Court Battle Dims Hopes for COVID Legislation - Mel Schwarz, Eide Bailly. "Most of those I have spoken with believe that COVID-19 relief legislation is now a long shot for enactment before the election."

Tax Extenders - Can It Really Be That Time Again? - Eide Bailly:

Among the tax provisions slated to expire at the end of 2020 are...

These provisions are enacted with expiration dates to keep their stated impact on the budget down. They are rarely allowed to really expire. If any temporary provision that gets extended were scored as though it were permanent, the budget would be a little more honest.

Conservation Easement Deals Not Deterred by IRS Notice - Alexis Gravely, Tax Notes ($). "The number and deduction value of syndicated conservation easement transactions continued to rise despite their designation as a listed transaction, according to new data from the IRS."

How Should Wealth and Work Be Treated in the Tax Code? - Garrett Watson, Tax Policy Blog:

Additionally, owners of assets with accrued capital gains can defer paying capital gains tax until the gain is realized, or even avoid the tax altogether when bequeathing the asset to an heir through step-up in basis. Critics of this tax treatment argue that this leads to lower effective tax rates for the highest earners, as economists Gabriel Zucman and Emmanuel Saez argued in their book The Triumph of Injustice last year. This perceived unfairness has motivated several of Biden’s tax proposals, including his idea to tax capital gains as ordinary income for those earning over $1 million and repealing step-up in basis.

The preferential tax rates for qualified capital gains and dividends exist in part to mitigate the double taxation of returns to corporate equities, which are taxed once at the firm level at 21 percent before being taxed again when shareholders receive corporate dividends or realize a capital gain (see Figure 1). Additionally, returns to saving are not taxed neutrally, as both the principal and returns are taxed. This incentivizes consumption over saving (deferring consumption), reducing investment and incomes. This is especially true for the pass-through sector, which may not have as much access to international capital markets to make up for reduced domestic saving. 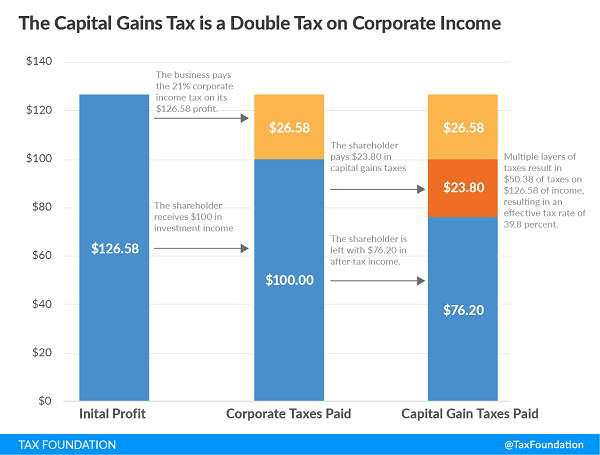 Economist Challenges Assumptions Of Wealth Tax Advocates - Peter Reilly, Forbes. "Mr. Magness argues that Saez-Zucman are overstating the concentration of wealth at the top. And of course this also calls into question the notion that wealth inequality is skyrocketing."

Six-Cent Tax Mess - Jim Maule, Mauled Again. "What the stories tell us is that somehow a 90-year-old woman suffering from Alzheimer’s disease came up six cents short on her 2019 real estate taxes. Somehow, with interest and administrative costs, her debt grew to $300." That didn't stop the town from proceeding to try to sell the house from under her for a six-cent tax arrearage.

It's better to give than to receive, but it's better to receive when it's a gift. The tax law makes it much better to be given something than to earn it. Earnings are usually taxable income, but gifts are income tax-free. While there is a gift tax, the large annual exclusion and lifetime exemption amount usually cover gifts. Even when they are taxable, it's the giver who pays.

That's why you see tax cases come up where the IRS doesn't think the taxpayer really received a gift. The Ninth Circuit last week upheld a Tax Court case where the IRS won the argument.

The case involved an attorney who had health challenges, including brain surgery. He received a $30,000 check from a client, a Mr. Walker, later in the year. The attorney treated the payment as a gift and left it off of his 1040.

Tax Court Judge Ashford provides some background. He noted that the check came from a client who had just received a $360,000 legal settlement in a case where he was represented by the taxpayer attorney. Even though the amount wasn't invoiced, the judge found that it was earned, rather than a gift:

After weighing the evidence in the record, including Mr. Walker's testimony, we hold that Mr. Walker gave $30,000 to petitioner primarily out of gratitude for petitioner's services in representing him and bringing the lawsuit to a successful conclusion after 14 years. We find most persuasive as clear indications that Mr. Walker was not making a gift to petitioner the facts that (1) he would not have given $30,000 to petitioner but for his receipt of the lump-sum payment exceeding $360,000 from the lawsuit and (2) he deducted the $30,000 on his Federal income tax return.

You could say the payment was treated like a restaurant tip, if perhaps a big one. You don't have to leave a tip, but you wouldn't leave one if the waiter didn't serve you. It's well settled that tips are income, so it shouldn't be surprising that they are income for attorneys, too.

Chicagohenge. Today is the first day of fall. In an ancient ritual, Chicagoans celebrate the annual alignment of the sunrise with the street grid (NPR).