The employer is responsible for collecting and depositing any amounts that have been deferred. Withholding and deposit of such taxes is postponed until the period beginning on January 1, 2021, and ending on April 30, 2021. No interest or penalty will accrue on such taxes until May 1, 2021. Wage withholding is assumed to be the method by which an employer will collect the deferred tax, but the Notice provides that the employer may make arrangements to otherwise collect these amounts from the employee.

...employers are allowed to defer the withholding and payment of the payroll taxes on employees’ applicable wages, but not required to do so.

Deadline Relief for Iowa Derecho Now Covers 11 Counties. A late post from yesterday where I update the IRS filing relief for Iowans affected by the August 10 storm. Many deadlines are extended to December 15, including extended return due dates and third quarter estimated tax payments.

California considers a taxpayer to be "doing business" there if any of the following conditions are satisfied:

Lenders may need to resubmit income verification. Thomsen Reuters reports ($): "IRS has stated that its systems have misplaced whole batches of transcript requests to its Income Verification Express Service (IVES) and has instructed requestors to resubmit the requests."

IVES is used by lenders to verify income when processing loan applications. The missing transcript requests were submitted August 1 through August 21.

Web Page Providing IRS Guidance for BBA Centralized Partnership Audit Regime Published by the Agency - Ed Zollars, Current Federal Tax Developments. "The page is meant to provide a centralized location for the agency’s information and guidance on the new audit regime introduced by the Bipartisan Budget Act of 2015, which replaces the prior TEFRA partnership audit regime."

The Road To Abusive Tax Shelters Is Paved with Good Intentions - Renu Zaretsky, TaxVox. "IRS has documented certain abuses of conservation easement transactions and tried to curtail them. In response, lobbyists for those engaging in these deals have urged Congress to block IRS enforcement. But in March 2019, the Senate Finance Committee launched a bipartisan investigation into a number of alleged abuses, and last week, it released the results in a damning, nearly 200-page report."

Does Your State Have an Estate or Inheritance Tax? - Janelle Cammenga, Tax Policy Blog. "In addition to the federal estate tax, with a top rate of 40 percent, some states levy an additional estate or inheritance tax. Twelve states and the District of Columbia impose estate taxes and six impose inheritance taxes. Maryland is the only state to impose both now that New Jersey has repealed its inheritance tax." 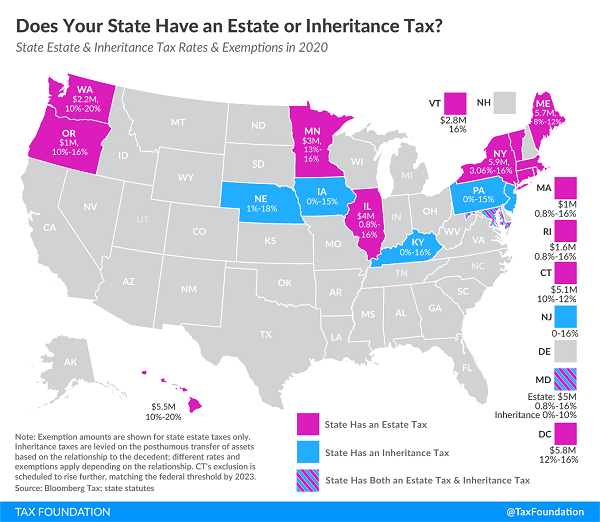 "Estate and inheritance taxes are burdensome. They disincentivize business investment and can drive high-net-worth individuals out-of-state. They also yield estate planning and tax avoidance strategies that are inefficient, not only for affected taxpayers, but for the economy at large."

Gilmore City Man Sentenced to Federal Prison for Filing False Tax Returns and Theft of Government Funds - Department of Justice. The Iowa man pleaded guilty to preparing returns for others claiming false earned income and child tax credits, according to the information document filed with the court. He was sentenced to a year and a day in prison.

His clients have surely received extra attention from the IRS. A preparer who seems to always get bigger refunds isn't always the best choice.

A taxpayer claimed a dependency exemption for his partner's child, telling the Tax Court that they were "common law" married. Procedurally Taxing explains (per this blog's practice, taxpayer names are omitted):

Taxpayer claims that while not formally married in his home state of California, one night while he and his significant other were in Missouri they crossed the border into Kansas for dinner and declared themselves married...

While the facts might be unusual, even more unusual is how the taxpayer’s version of events was discredited. At trial social media posts were entered into evidence (presumably by Chief Counsel) that showed Taxpayer referring to his significant other as his fiancée after the date of their alleged common law marriage. This plus a host of other inconsistencies (which were probably enough to carry the day for the respondent without mention of the social media post) were enough to satisfy Judge Copeland that the testimony regarding a Kansas common law marriage was unreliable and not enough for the taxpayer to carry their burden of proof. As a result the dependency deduction was denied.

Remember, the Tax Court and the IRS know how Google works.

Today in History: The Treaty of Paris, ending the Revolutionary War with the recognition of American independence, was signed September 3, 1783. Check out Benjamin Franklin's handwritten copy and give thanks for standard typefaces.