The IRS urges employers to take a number of steps to protect themselves from unscrupulous third parties.

There's more, but this tip - using EFTPS to monitor that your payroll taxes are actually making it to the IRS - may be the most important part of using a third-party payroll provider. If the third party takes your money but doesn't remit it, the IRS will still want you to pay them.

There are two scenarios under which a bank can qualify to be an eligible employer.

1. The first is a gross receipts test, in which a bank would need to have a 50% reduction in gross receipts compared to the same calendar quarter last year to qualify. This test will be extremely difficult for most banks to meet.

2. The second scenario involves a bank having its operations fully or partially suspended by an appropriate government authority limiting commerce, travel or group meetings due to COVID-19 in a manner that affects the bank’s operations.

That Direct Deposit from “IRS TREAS 310” Is Legitimate - Russ Fox, Taxable Talk. "Several clients asked this morning about mysterious direct deposits from “IRS TREAS 310,” wondering what these were. That’s the interest on your refund from April 15th until the date you filed."

“The president’s looking for all kinds of ways to make sure that that is forgiven,” National Economic Council Director Larry Kudlow told White House reporters August 19.

One option the Trump administration is looking at isn’t forgiveness per se, but rather stretching the repayment of employees’ deferred payroll taxes out over many years so that “essentially it will be forgiven,” Kudlow said.

The deferral is supposed to start in less than two weeks, so they need to figure this out quickly.

Chair of Ways and Means Requests IRS Cease Sending Notices of Payments Due Until Mail Backlog is Resolved - Ed Zollars, Current Federal Tax Developments. "The letter notes that this is the second time the IRS has sent out incorrect notices in recent months, apparently referring to the IRS mailing out notices that had been generated but not mailed during the agency’s shutdown following the declaration of a national emergency related to COVID-19.  Many of those notices showed a due date for response or payment that was earlier than the date the notice was mailed."

GAO suggests 7 ways to improve gig worker tax compliance - Kay Bell, Don't Mess With Taxes. "The two GAO recommendations that I find most interesting are a voluntary withholding option and the change to forms indicating that a filer's earnings are from gig/platform work."

Introducing IRS's New Form 1099-NEC, Nonemployee Compensation - Brett Hersh, Overnight Accountant. "Nonemployee compensation are payments made for services during the calendar year to unincorporated individuals and businesses who are not employees."

Biden’s Tax Hikes May Be A Tough Sell In 2021. What If He Paired Them With Big Refundable Tax Credits? Howard Gleckman, TaxVox. "Biden may not be able to sell even a Democratic Congress on a huge increase in taxes during a still-wobbly economy, but by embracing a more ambitious package of refundable tax credits, he might convince lawmakers to shift the burden of taxes up the economic food chain."

Senate Investigation Concludes IRS Free File Program is Not Meeting Eligible Taxpayers’ Needs - Evan Phoenix, Procedurally Taxing. "Given the enormous potential of the Free File Program to meet its mission of best serving vulnerable taxpayers’ needs, one can only hope the IRS heeds the constructive criticism outlined in the PSI Memo, which echoes previously reported issues."

Where Do People Pay the Most in Property Taxes? - Janelle Cammenga, Tax Policy Blog. "The five counties with the highest median property tax payments all have bills exceeding $10,000— Bergen and Essex Counties in New Jersey, and Nassau, Rockland, and Westchester counties in New York." 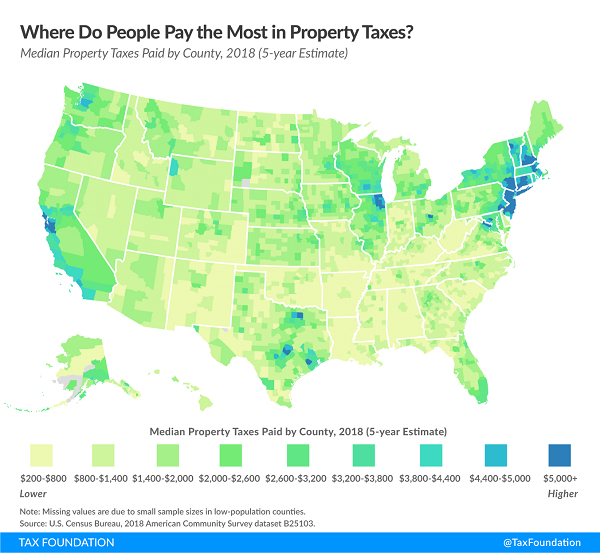 If you follow the link to Janelle's post, there is an interactive map where you can see where your own county stands.

Dust to dust. A taxpayer's deductions for an innovative toilet system went the way of all flesh in Tax Court yesterday.

And like countless taxpayers before her, the Zerolet taxpayer's proof came up short. From the Tax Court opinion:

Neither petitioner's testimony nor any other evidence included in the record related to the Jameson and Zerolet projects would allow for a finding that either project constituted a “trade or business” within the meaning of section 162 during any of the years in issue. Petitioner's vague, undisciplined, and sometimes contradictory testimony attempting to describe these projects makes us wonder whether either project actually existed beyond her own intentions. Even if either did, petitioners have failed to substantiate the amounts claimed or establish that the disallowed deductions relate to ordinary and necessary expenses of either project. Accordingly, other than those respondent conceded, respondent's disallowances of those deductions are sustained.

So, like the hypothetical output of the Zerolet, the deductions vanish, without environmental harm, but with no irrigation benefit and with a 20% accuracy-related penalty.

The Moral? If you want to claim business deductions, you need to have a business. If you don't have any paperwork or records to show you have a business, you just might want to rethink your deductions for it.