This case highlights an issue that comes up when a corporation sells operating assets: is the gain taxable in all the states the business operates in, or only in its home state. The seller in this case, YAM Special Holdings, Inc., was an Arizona S corporation that had about 1% of its sales in Minnesota. It sold a majority interest in its GoDaddy business to outside investors.

While YAM reported operating income to Minnesota, it did not include the GoDaddy gain as income apportionable to the Gopher State. The Minnesota Department of Revenue successfully argued that the GoDaddy business was "unitary" and that the gain on its sale was apportionable business income.

The Moral? Remember state tax issues when planning a sale of a business or a subsidiary.

GoDaddy Company’s Gain Subject to Minnesota Corporate Income Tax - Jenifer McLoughlin, Tax Notes ($). "Imposing Minnesota income tax on an apportioned share of income from a company’s sale of a majority interest in its GoDaddy.com business did not trigger a due process violation, according to the state supreme court."

Organizations exempt under 501(c)(3) are prohibited from engaging in any type of political activities. The main political restriction applies to offering support for a particular candidate or electioneering. It should be noted there is no de minimis rule (de minimis is a Latin expression meaning "about minimal things") related to partisan political activity. The IRS has the authority to respond to even a single violation by revoking exemption. They don’t take infractions lightly.

Be careful out there.

So-called “convenience rules” and similar income sourcing rules not only obligate workers to pay tax to jurisdictions where they did not work, but in many cases, they also strip them of eligibility for tax credits designed to avoid double taxation when someone lives in one state and works in another.

Remote Work During COVID-19 Affects Withholding, Apportionment - Andrea Muse, Tax Notes ($). "Karl Frieden, vice president and general counsel for the Council On State Taxation, said the council has been pushing for years to get federal legislation like the Mobile Workforce State Income Tax Simplification Act passed so that employees working in a state for 30 or fewer days a year would not create a withholding liability in the state or a requirement that the employee file tax returns in that state."

Trump’s Optional Payroll Tax Plan May Not Pay Off, Analysts Say - Jonathan Curry, Tax Notes ($). "According to Bryan Camp of Texas Tech University School of Law, however, the regulations under section 7508A may block the IRS: “The [IRS] can issue a postponement of all kinds of tax obligations, but probably not employment tax obligations,” he told Tax Notes."

As my colleague Kyle Pomerleau and other commentators (here and here and here and here) point out, though, difficulties would arise come payback time in 2021. In addition to resuming withholding of Social Security taxes, employers would presumably have to temporarily withhold extra money to repay the back taxes, which would have cumulated to a full week’s pay by that point. Workers might find the sudden drop in their take-home pay jarring. Moreover, employers would probably be unable to collect the back taxes from any workers who had left their jobs before the payback began — employers might end up being on the hook for those taxes. Many employers will surely hesitate to wade into this quagmire.

Of course, President Trump wants the deferred taxes to be forgiven, which would eliminate the payback problems. (Actually, he suggested on Saturday that he wants to go much further by making “permanent cuts” to the payroll tax and eventually “terminating” it, although his advisers walked back those comments the next day.) But no sensible employer would count on the taxes being forgiven.

Mnuchin Suggests Payroll Tax Deferral Will Be Up To Employers: We Can’t Force People To Participate - Kelly Phillips Erb, Forbes:

Today, Treasury Secretary Steven Mnuchin gave FOX Business' Maria Bartiromo a first look into how that might work, and it appears that the deferral will be voluntary.

Specifically, Bartiromo addressed the cuts, saying, "But there is some worry about the cost of this. Employers are talking about facing a series of costs, uncertainties, and headaches."

Mnuchin responded, "Well, we're going to create a level of certainty for employers that want to participate. We can't force people to participate. But I think many small businesses will do this and pass on the benefits. But I think the President would like to do a payroll tax cut so he'll go back to Congress when he wins the election and ask Congress to have this money forgiven and have the Social Security trust fund fully topped up so that in no way does this impact Social Security."

It appears that Treasury is still figuring this out. Given the amount of work employers will have to do to deal with a payroll tax holiday, formal guidance can't come too soon.

Capital gains tax outlook: Trump says cut, Biden pro hike - Kay Bell, Don't Mess With Taxes. "In the meantime, if you do have investments and are considering selling them, take note of the current capital gains tax rates, as well as what might happen to them in the coming years."

Trump Executive Action Shows Why Congress Should Federalize More of Unemployment Insurance - Tracy Gordon, TaxVox. "Governors interpreted this and the text of Saturday’s presidential memorandum to indicate the extra $400 a week would be available only in states that had agreed to pick up 25 percent of the tab. But then yesterday, after governors balked at the cost of setting up a new program amid major COVID-induced budget shortfalls, National Economic Council Director Larry Kudlow clarified that actually the federal benefit would be $300 a week and states had the option to provide another $100 a week." 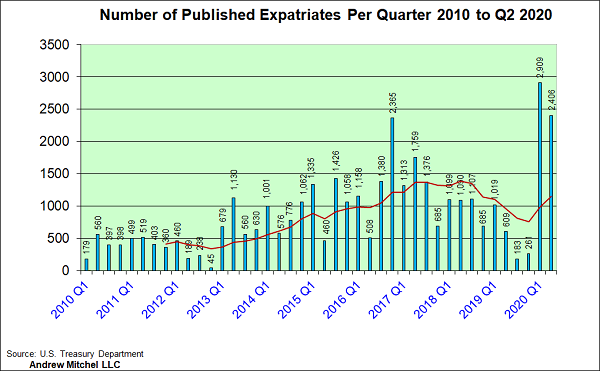 SBA Publishes Interim Final Rule on Appeal Procedures for Certain SBA Decisions Regarding a Borrower's PPP Loan - Ed Zollars, Current Federal Tax Developments. "The previously promised guidance on the appeals process for PPP borrowers who are wholly or partially denied forgiveness has been released as an interim final rule (IFR) by the Small Business Administration."

Nebraska lawmakers pass tax cut for military retirees - WOWT.com. "Lawmakers gave the measure final approval Wednesday and sent it to Gov. Pete Ricketts, who proposed it at the start of this year’s session. The bill would exempt half of a military retiree’s benefits from Nebraska state taxes."

Iowa has a similar exclusion for military retiremement pay.

A Mellon anecdote that I previously had not focused on was his tax travails where, after he left his Treasury Secretary position on Roosevelt’s election to the Presidency, the Government attempted unsuccessfully to indict him for tax evasion (11-10 vote in grand jury) and then issued a notice of deficiency seeking large deficiencies; somehow fraud was in issue (presumably either because of the civil fraud penalty or the statute of limitations).  Mellon v. Commissioner, 36 B.T.A. 977 (1937), here.  Robert Jackson, who later became Supreme Court Justice and chief prosecutor at the Nuremberg Trials, led the BTA case for the IRS.  The BTA rejected the IRS claim of fraud (36 B.T.A., at 1054-1055).

A tale from the dangerous intersection of politics, taxes, and prosecutorial discretion.