Divorce buyout adds no basis on subsequent sale of family business. When a marriage ends, sometimes a family business is the biggest item to divide. If one spouse started and ran the business, it might not be wise to split the ownership with the parting spouse. The couple arrives at a value for the business. The active spouse keeps the business, and the other spouse gets cash. It looks a lot like one owner buying out another. But tax-wise, it might be something else.

That was the issue in a case decided by the Tax Court yesterday. Steven started a business, DCA, which he owned through an S corporation (SRM). When Steven and Georgeann divorced, they agreed on a business value, and Georgeann received a cash settlement.

A few years later, Steven sold the business at a gain. He reduced the amount of gain to reflect the amount paid in the divorce related to the business. In effect, he said he bought her interest in the business.

Tax Court Judge Lauber said it doesn't work like that:

Petitioners characterize Steven's payments as “acquisition costs” and contend that they generate basis under section 742, which provides that “[t]he basis of an interest in a partnership acquired other than by contribution” shall be determined under the Code's general basis rules. See sec. 742 (cross-referencing sections 1011-1022). But SRM owned 70% of DCA both before and after the divorce. Neither Steven nor SRM “acquired” any interest in DCA (from Georgeann or anyone else) in consequence of these payments.

In short, while we agree with petitioners that Steven's payments to Georgeann were part of a property settlement, it does not follow that his payments generated additional basis in DCA. The conclusion would be the same (if perhaps more obvious) if the key marital asset consisted of publicly traded stock rather than a partnership interest. For example, assume that Steven owned $21 million of IBM stock, which the parties regarded as a marital asset whose value was to be split 50%-50% between them. If Georgeann received $10.5 million of IBM stock in the property settlement, Steven could not plausibly contend that his basis in his retained IBM shares should be increased by $10.5 million. And the result would be no different if Steven retained all the IBM shares and paid Georgeann the value of her 50% interest in cash.

Divorce isn't easy. The tax law makes it a little less difficult by making property settlements non-taxable. As this case shows, though, that can just delay the tax pain.

Conservation Easements—Is IRS Burning The Forest To Save It? - Peter Reilly, Forbes:

Until recently IRS has generally not attacked the easements on valuation. Rather it looks for subtle flaws like the extinguishment clause in Belair. There are problems with the way the returns are filled out, failure to get mortgagees to subordinate and even relatively short delays in recording.

The problem with those “gotchas’ is that they are traps that people who are not trying to get away with anything can fall into.

Fair or not, the courts back up the IRS when they disallow appreciated property charitable deductions for foot-faults. Get the appraisals done right, fill out the forms, and be hyper-careful with the paperwork.

What is the Real Value of $100 in Your State? - Garret Watson, Tax Policy Blog:

In this map, $100 represents the amount of goods and services that can be bought in a state with average national prices. In states with higher-than-average prices, such as Vermont, $100 will buy comparatively less than a state with lower-than-average prices, such as Tennessee. We illustrate this by adjusting the $100 national average for each state.

For example, Ohio is a low-price state. There, $100 will buy goods and services that would cost $113.12 in a state at the national average price level. Put another way, Ohioans are, on average, about 13 percent richer than their nominal incomes suggest. 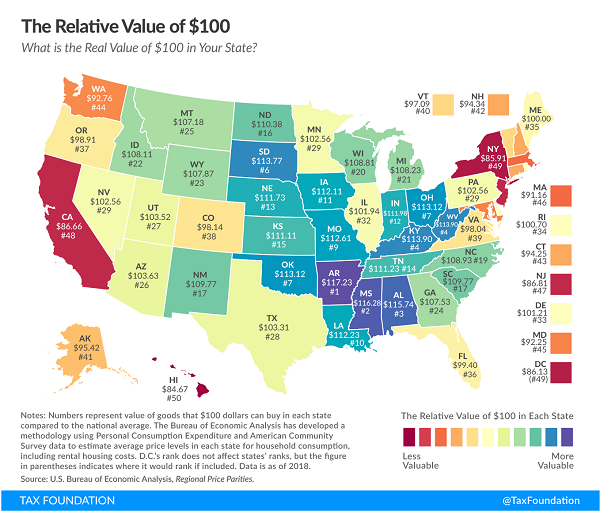 U.S. Partnerships Owning CFCs - International Tax Blog. "In general, a domestic partnership that owns a CFC does not have a GILTI inclusion amount. However, a partner in the domestic partnership may have a GILTI inclusion amount if the partner is a U.S. shareholder of the CFC (typically meaning that the partner directly or indirectly owns 10% or more of the CFC)."

A Walk Through the Life Cycle of Cases in Tax Court: Designated Orders, 5/18/2020 – 5/22/2020 - Caleb Smith, Procedurally Taxing. "There wasn’t much new ground broken in the designated orders the week of May 18, 2020. However, the four orders of the week did provide an interesting look at the progression of cases in Tax Court -from what is essentially the first motion a party is likely to file (dismissal for lack of jurisdiction) to the last (motion to revise decision), and a few in-between."

True or False: "Treasury and the IRS do not have a great history of complying with APA procedures" - Federal Tax Procedure. "Basically, the issue is whether the affected public (generally referred to in a tax context as “taxpayers”) may litigate IRS positions that may have penalty consequences soon after the IRS publishes the positions in some type of guidance document or must await enforcement of the penalties which may be years after publication."