House Ways and Means Committee Chair Richard E. Neal, D-Mass., and Ways and Means Committee member John B. Larson, D-Conn., chair of the Social Security subcommittee, panned the idea in an August 3 statement. The pair criticized Trump’s continued insistence on the “foolhardy idea” of a payroll tax cut in the face of congressional resistance, warning that it would “drain money from Social Security and Medicare.”

Democrats, White House Upbeat After New Talks on Coronavirus Aid Bill - Siobhan Hughes and Andrew Restuccia, Wall Street Journal ($). "The two sides remain at odds on whether to cut the jobless supplement or provide aid to financially strapped states and localities, how much money to allocate for controlling the virus and for food stamps, and myriad other issues. But they have signaled progress in recent meetings."

What's at Stake in the Stimulus Negotiations? - Kristine Tidgren, Ag Docket. "The law would simplify the forgiveness process for PPP loans by allowing borrowers with loans under $150,000 to receive automatic forgiveness upon making a good faith attestation that they complied with the rules."

Coronavirus Assistance for American Families Act Would Provide More Generous Rebates for Dependents - Garret Watson and Huaqun Li, Tax Policy Blog. "This proposal would provide payments of $1,000 to adults and children with Social Security numbers, subject to income limits used in the original round of rebates. It would be more generous to households and families with children when compared to the original rebates distributed under the Coroanvirus Aid, Relief, and Economic Security (CARES) Act."

In an example in the final rules, a partnership is considering getting a loan from a third party, but it already has a lot of interest expense. Instead, a partner makes an additional contribution to the partnership and in return gets a guaranteed payment.

In that scenario, the government concluded, the guaranteed payment should be treated as interest subject to the section 163(j) limitations.

The Government’s Statement to Taxpayers: PPP Fraud Will be Prosecuted - Ryan Dean, Freeman Law Tax Blog. "A quick review of recent DoJ press releases indicates that at least 19 indictments have been made since May regarding PPP fraud.  This demonstrates that the government has placed a heavy focus on prosecuting PPP fraud."

4 August tax moves to make during pandemic Dog Days - Kay Bell, Don't Mess With Taxes. "Yes, COVID-19 did delay Tax Day until last month. But as far as the rest of the tax realm is concerned, there still are some matters that must be considered."

Kelly Cortesi, director of communications for the Tennessee revenue department, said in a June 4 email that the increase in remote sales tax revenue is not enough to make up for decreased sales tax revenue from physical stores.

Cortesi said the DOR collected $16.5 million in state and local sales tax from out-of-state retailers for April in comparison to the $7.1 million that was collected during the same time in 2019, but overall sales tax collections for April were down 6 percent.

The Supreme Court's Wayfair decision allows states to collect more online revenue by collecting it directly from remote sellers. States are taking advantage of that opportunity, and that makes sales tax compliance important for anyone selling across state lines.

Massachusetts Ban of Flavored Cigarettes Is Getting Expensive - Ulrik Boesen, Tax Policy Blog. "Unfortunately, if we dig a little deeper, it becomes evident that Massachusetts’ flavor ban has not limited use, just changed where Bay Staters purchase cigarettes." 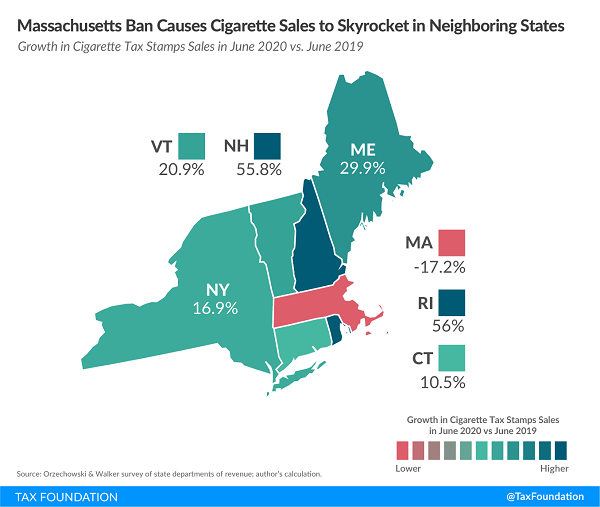 California 13.3% Tax Rate May Be Raised To 16.8%...Retroactively - Robert W. Wood, Forbes. "Most Californians think they already pay high taxes, and they are not wrong. But a tax bill, AB 1253 (Santiago), would impose even higher taxes, and retroactively to January 1, 2020."

It would be a good test of theories holding that people don't move in response to taxes.

IRS Letter Allows Allocation of Contributions Between HRA and Profit-Sharing Plan - Thomson Reuters Tax & Accounting Blog. "In a private letter ruling, the IRS has affirmed that employees may allocate employer contributions between a funded health reimbursement arrangement (HRA) and a qualified profit-sharing plan without altering the tax effects of either plan. The ruling was requested by a union proposing plan amendments that would give employees an annual advance election to allocate a portion of their employers’ contributions (after a set minimum contribution to the HRA) between the HRA and the profit-sharing plan."

James Lee Will Head IRS Criminal Investigation As New Chief - Kelly Phillips Erb, Forbes. "Lee already has a significant IRS-CI career. Before serving as Deputy Chief of CI, he served as the Director of Field Operations, Northern Area, where he oversaw CI enforcement programs in the Boston, New Jersey, New York, Ohio, and Philadelphia Field Offices. He also previously served in executive roles as the Director of Field Operations, Southern Area, and the Director, Strategy."

“What we see across the board when talking to workers is a lot of misconceptions about what can be deducted, and how to track and deduct expenses so that all of that is in order in case of an audit,” said Garrett Watson of the Tax Foundation. He said it’s important for gig economy workers to learn how to properly account for expenses not only for tax purposes, but also to ensure they have a complete understanding of their actual income...

Part of the problem is that online platforms mostly hadn’t been required to give their service providers a Form 1099 because under section 6050W, no information reporting is required from third-party settlement organizations unless the payee has more than 200 transactions that collectively exceed $20,000.

Lesson From The Tax Court: You Get What You Pay For - Bryan Camp, TaxProf Blog. "It’s sweet to beat the IRS. It’s even sweeter to make the government pay your costs." But if your only cost is your own time...

Notice is a Big Deal When Dealing With Tax Debts in Bankruptcy - Keith Fogg, Procedurally Taxing. "Notice to the government when trying to obtain relief from something the IRS has done or seeks to do can make or break a case.  Generally speaking, a fair amount of protection exists for the IRS regarding notice, because it needs protection in order to insure that the information gets to the right place in time for the IRS to react properly to the request of a third party seeking to cut off rights the IRS would seek to assert or preserve."

[N]o rational person would incur indebtedness of $41.5 million to acquire stock that he already owned free and clear.

Raise a glass. Aug. 4, 1693: Dom Pérignon 'Drinks the Stars' (Wired.com)  By tradition, if not actual fact, today is celebrated as the anniversary of the invention of champaigne in 1693.