Lawmakers and companies say they thought the GILTI tax wouldn’t apply if companies paid rates above 13.125%. But there were technicalities in how the new U.S. system interacted with longstanding U.S. tax rules, which meant that many companies with relatively high foreign tax rates were subject to GILTI—including Kansas City Southern and Procter & Gamble Co.

This is retroactive; corporations who paid 2018 tax under the GILTI rules may be able to claim refunds.

Republican Relief Package Expected This Week - Jad Chamseddine, Tax Notes ($). "While the measure is expected to make some changes to the tax law, Republicans are opposed to extending the supercharged unemployment benefits that are scheduled to expire at the end of the month, and they want to provide liability protection for businesses that open."

Second Stimulus Check - Wait For Something To Pass - Peter Reilly, Forbes. "The problem with thinking a lot about proposals is that they can get stuck in your heard and confuse when something different passes."

What a COVID-related payroll tax cut could mean to you now and your retirement later - Kay Bell, Don't Mess With Taxes. "Cutting payroll taxes, even fractionally and temporarily, could speed up the expected Social Security benefits shortfall date."

The IRS’s “Hi-Def” revenue officer sweeps brought many rich tax delinquents into compliance, but the IRS is planning another operation for those who didn’t fix their problems.

Related: Increased IRS Compliance & How it Will Affect You

IRS Return Information Disclosures to Other Federal or State Authorities for Information Obtained in Voluntary Disclosure Processing and other Agency Activity - Jack Townsend, Federal Tax Crimes Blog. "In any event, in my opinion, it is pretty important to err on the side of overdisclosure rather than underdisclosure, in order to mitigate the risk that the IRS would claim underdisclosure as a basis for denying the taxpayer fully cooperated, a requirement for voluntary disclosure."

Estate Planner: Plan Ahead for Possible Biden Term - Jonathan Curry, Tax Notes ($). "Wealthy taxpayers will wish they had acted sooner if presumptive Democratic presidential nominee Joe Biden gets his way when it comes to tax hikes on the rich, an estate planner warned."

Quoting from Suzy’s Zoo v. Commissioner, 273 F.3d 875, 883 (9th Cir. 2001) Judge Lauber tells us that “The purpose of § 481 is to prevent either a distortion of taxable income or a windfall to the taxpayer arising from a change in accounting method when the statute of limitations bars reopening of the taxpayer’s earlier returns.” Op. at 8.  Notice that the provision does not re-open a closed year.  Nor does it change the liability for the closed year.  The closed year remains closed.  What the provision does instead is force the taxpayer to account for errors made in the closed years in the year of audit, thus changing the tax liability for the year of audit.

In this case, the taxpayers depreciated buildings as five-year property. Sec. 481 let the IRS fix the accumulated error in the audit year.

30+ Tax Tips From The Tax Pros - Kelly Phillips Erb, Forbes. "Don't be afraid of paying for an hour or two of a CPAs time."

Tax Return Filed With IRS, But Should You Amend It? - Robert W. Wood, Forbes. "You usually can’t correct a tax return without amending it. But there's an exception for some mistakes up until the normal due date—or your extended due date if you went on extension. If you file a ‘superseding’ return before the due date of the original return (including extensions), it can take the place of the originally filed return."

Second Circuit Agrees with Tax Court, Taxpayer's Property Was Not Used in a Trade or Business, Loss on Sale Was Capital - Ed Zollars, Current Federal Tax Developments. "The panel notes that there were only limited attempts to rent the property, but continuous efforts to sell the property..."

A Sun Has Set: Reflections on the Honorable John Lewis - Nina Olson, Procedurally Taxing. "Historians and advocates will assess his enormous contributions in the fields of human and civil rights. Here, today, I just want to share how John Lewis affected my life and my work."

Farewell to the Iconic Tax Court Eagle. For those inclined to believe our great institutions are in decline, a visit to the new U.S. Tax Court home page will reinforce your pessimism. The new page: 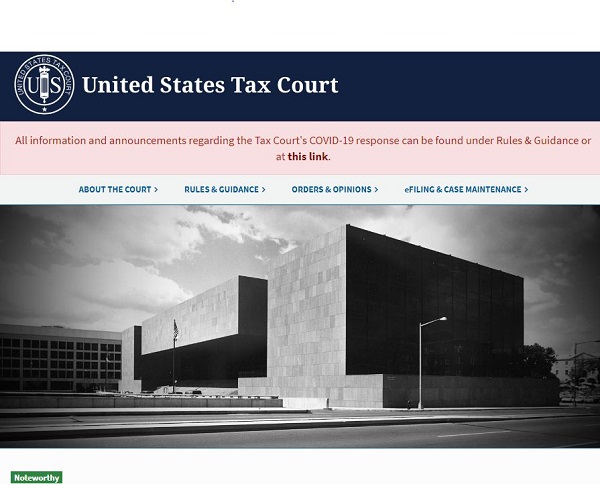 Here is how it looked in March:

#taxtwitter noticed the change. @taxgirl, AKA Kelly Phillips Erb, chimes in: "I don't like it AT ALL. It looks like someone wanted to look super corporate and yet former Eastern bloc all at the same time."

In fairness, any picture of the Tax Court Building can't help but look a bit Soviet. RIP, Tax Court Eagle.