COVID-19 relief - The Senate Steps to the Plate

The Senate is expected to turn to the latest round of COVID-19 relief this coming week. Majority leader McConnell has stated that he plans to have a new stimulus package ready to discuss with Republican Senators on Monday. Once the process of “socializing” the package with the Republicans is complete, it will be shown to the Democrats and the legislative process started. How long this will take likely depends on whether the Senate package reflects a deal with the Senate Democrats that can be presented to the House on a virtually take-it-or-leave it basis, or whether it will be a Republicans only bill designed to serve as a starting point for negotiations with the House.

The calendar argues against an extended negotiation with the House. The House is scheduled to leave for their summer recess on July 31, with the Senate scheduled to follow on August 7. While Speaker Pelosi has already warned House members not to count on leaving at the end of July, there will be pressure in both the House and Senate to pass another round of stimulus legislation and get out of town. Although it is possible that the legislation could be left hanging until Congress returns after Labor Day, the June unemployment report is scheduled to be released the day the Senate is scheduled to go home. Participants on both sides of the partisan divide have expressed doubt that any member of Congress running for re-elections (all of the House and a plurality of the Senate) wants to be seen leaving for a month-long vacation with the unemployment rate still in double digits.

This does not mean that the process will be easy. The Democratic House laid down its negotiating position in the $3 trillion HEORES Act, while McConnell and the Administration have suggested that their bill will be in the $1 to $1.3 trillion range. Even that amount may be difficult for McConnell to push through the Republican caucus. While there is general agreement that additional economic stimulus is necessary, there is concern about the rapid growth in the Federal deficit. As the graph shows, the Congressional Budget Office has gone from estimating the fiscal year 2019, 2020 deficit at $747 billion in June of 2019, to a revised estimate of $2.74 trillion dollars at the end of June 2020. Not all are comfortable with this situation. 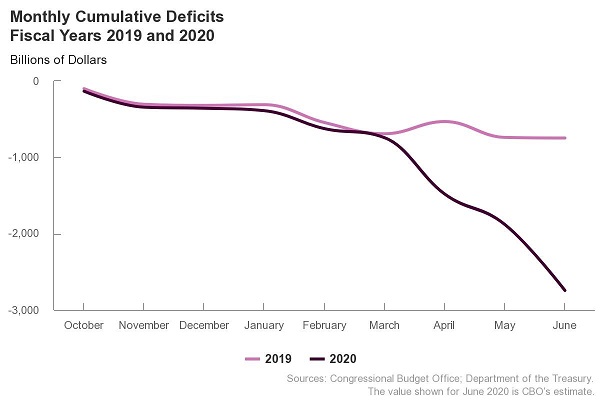