IRS Will Pay Interest on Late Refunds—Even for Those Who Haven’t Filed Yet - Richard Rubin, Wall Street Journal ($). "The result: Many people who chose to delay filing their tax returns will get a bonus from the government. The IRS, meanwhile, will be paying for the privilege of holding on to the money since April 15—even to taxpayers who haven’t claimed it yet."

Interest Will Be Paid on Refunds from April 15 to July 15 - Ed Zollars, Current Federal Tax Developments:

The rates in question per the IRS statement are:

Tax Filing Date Hasn’t Budged, But Treasury Is Thinking About It - Kelly Phillips Erb, Forbes. "Despite the extraordinary circumstances surrounding this tax season, the IRS has already received nearly 137 million returns in 2020 - but that number on its own is a bit misleading. That number includes tax returns that were filed to obtain Economic Impact Payments (EIPs, or stimulus checks) by those who would not usually file."

No, Please No - Russ Fox, Taxable Talk. On extending the filing deadline: "I and every other tax professional would like this Tax Season to end."

While I would like it to end, it's not about us. Asking someone to pony up taxes now for a prosperous 2019 while their business is bleeding to death in 2020 may not be sound policy.

IRS allows RMD reversal through Aug. 31 - Kay Bell, Don't Mess With Taxes. "Account owners who took RMDs in January now can undo them. And they have until Aug. 31 to decide whether that's the right tax and financial move."

“We are working on a [revenue procedure] that deals with this,” Michael R. Gould, an attorney in the IRS Office of Associate Chief Counsel (Passthroughs and Special Industries), said June 24 on an American Bar Association Section of Taxation webcast.

... One example is when a taxpayer leaves the S corporation but the business later looks to true-up that taxpayer who is no longer a shareholder.

Other discrepancies can arise as a result of state withholding rules. Fortunately, the regulations are relatively forgiving. Given the expensive consequences of losing an S corporation, though, more guidance is better.

O-Zone Investment Window May Be Longer Than You Think - Jonathan Curry, Tax Notes ($). "The IRS recently extended the 180-day window for investors to roll capital gains into qualified opportunity funds, but investors may have tools at their disposal for stretching that window even further."

Three Reasons Expanding Credits Aren’t the Best Pandemic Response for the Vulnerable - Taylor LaJoie, Tax Policy Blog. "While reforming these credits may make sense, there are far better ways to provide individuals and families with more liquidity during this crisis."

Valuing Farm Chattels and Marketing Rights of Farmers - Roger McEowen, Agricultural Law and Taxation Blog. "When a farmer or rancher dies, often left behind are assets that are unique to agriculture. For tax purposes, these assets present unique valuation issues."

Related: The Importance of Business Valuation

The Tax Policy Blog offers a tasteful wine pairing: Wine Taxes in Europe (Elke Asen) and How High are Wine Taxes in Your State? (Janelle Cammenga). Iowa's $1.75 per gallon tax is the highest in Eide Bailly Territory, with California's 20 cents the lowest. 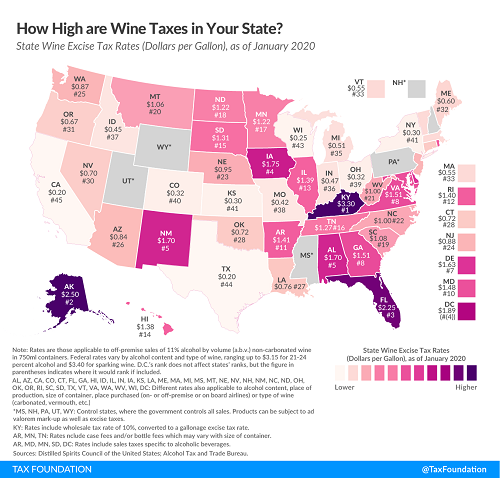 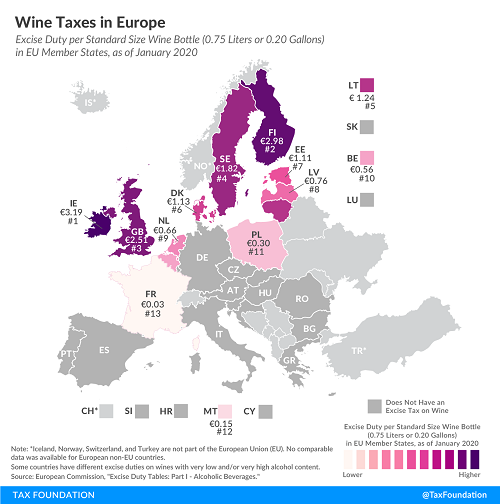 The European chart measures the tax in wine bottles (.75 liters) and Euros, which requires mental math to compare, as Americans learn when driving in Europe. The results are daunting. My quick math says a that a €1 tax on this map equals about $5.65 per gallon on the U.S. map. So, Iowa, you don't have it so bad. Your gallon of jug wine only costs $1.75 in Iowa taxes, but the same jug is taxed $18.03 in Ireland. No wonder they prefer Guinness.

Beware the Secret Shopper. Retailers sometimes hire "secret shoppers," or "mystery shoppers," to make sure their customer service is up to snuff.

The IRS also uses secret shoppers. They aren't looking to improve your customer experience, though. A Wisconsin man has learned that lesson the hard way. From an IRS Press Release (defendant name omitted):

The IRS secret shoppers usually sniff out business owners - often taverns - who may underreport income. The approach is simple: the secret shopper, posing as a potential buyer of the business, asks to see the bar tax return. An owner who has underreported income will hasten to explain the poor performance of the business on the tax returns by showing the shopper the "real" records with much higher income. In this case it wasn't the bar owners that got caught, but their overly-chatty gambling machine vendor.

The moral? Report all of your income. And know your customer.