Interim Final Rule Revising First PPP Interim Final Rule. The SBA has issued its first installment of updated guidance on the the Paycheck Protection Program to reflect the newest legislation. The guidance confirms that SBA will not treat the new rule requiring 60% of loan expenditures to be for payroll costs is not an all-or-nothing provision; borrowers falling short of 60% will only have their forgiveness reduced proportionally to the shortfall, rather than entirely: "While the Flexibility Act provides that a borrower shall use at least 60 percent of the PPP loan for payroll costs to receive loan forgiveness, the Administrator, in consultation with the Secretary, interprets this requirement as a proportional limit on nonpayroll costs as a share of the borrower’s loan forgiveness amount, rather than as a threshold for receiving any loan forgiveness."

Expect updates in the coming days.

Your Guide To State Tax Deadlines For Filing Returns & Making Estimated Payments During COVID-19 - Kelly Phillips Erb, Forbes. Iowa and Idaho are among the states that fail to conform to the July 15 IRS extended date.

How PPP Loans Affect Passthrough Deduction Is Unclear - Eric Yauch, Tax Notes ($). "The government’s position disallowing a deduction for the use of forgivable small business loan proceeds has some practitioners wondering if there are strategies to use the loan to increase the passthrough deduction."

Rules for NOL-Triggered Refunds Could Endanger Some Credits - Emily Foster, Tax Notes ($). "If a taxpayer carries back an NOL but generates excess FTCs (foreign tax credits) rather than freeing up an AMT credit to carry forward, that represents a different context because the rules aren’t the same, and it could yield an unfavorable-taxpayer result at a time when Congress has intended taxpayers to claim refunds from carryback losses to help manage liquidity."

Iowa Department of Revenue Bill Advances; includes GILTI fix, interest deduction decoupling, new penalties. HF 2641, the Department of Revenue's proposals for changes in Iowa tax law, is up for floor debate in the Iowa House of Representatives today. An amendment added to the bill this week in the House Ways Committee removes GILTI from the Iowa Corporation Tax Base, retroactively to 2019.

Another amendment from the bill uncouples Iowa from the federal Sec. 163(j) limitations on interest deductibility, effective for 2020.

The bill also includes a number of notable administrative changes in Iowa's tax law. These include adoption of partnership-level assessment of taxes relating from partnership examinations and a number of increased penalt provisions.

Pandemic Responses Could Boost Tax Efficiency in the Long Run - Nana Ama Sarfo, Tax Notes Tax Opinion Blog. "In some ways, these temporary responses follow a general movement toward taxpayer autonomy. The latest findings from the OECD show that tax authorities are increasingly promoting self-service options to give taxpayers more control. After all, happy taxpayers are more likely to be compliant taxpayers."

Premature Assessments - Keith Fogg, Procedurally Taxing. "Where a taxpayer mails a petition to the Tax Court and the IRS doesn’t notate the taxpayer’s account, the tax may automatically assess. The result is a premature assessment. The IRS may start collecting the tax it perceives to be assessed, including offsetting refunds the taxpayer may especially need now."

Complexity of VATs in Europe - Elke Asen, Tax Policy Blog. "One way of estimating the VAT’s administrative burden is to measure the time needed to comply with the tax. The time to comply indicator—measured in an annual study by the World Bank and PwC—reflects the number of hours it takes a domestic medium-size business per year to prepare, file, and pay VAT." 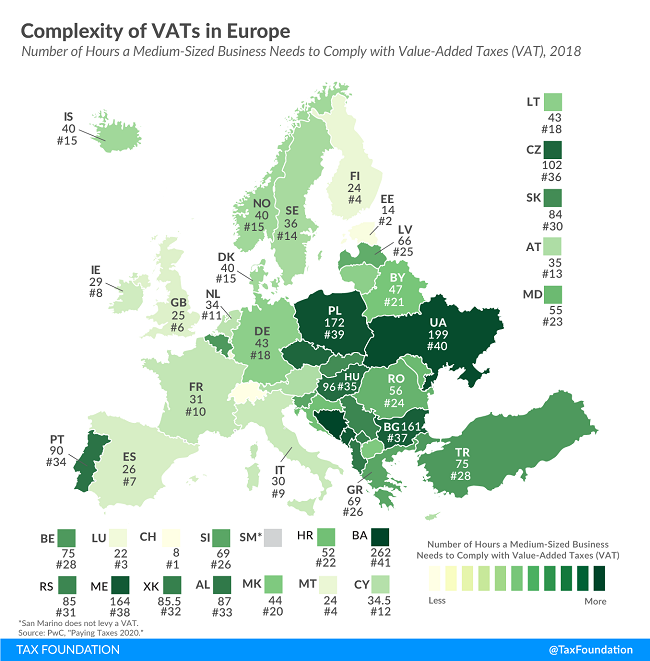 A Value-added Tax, or VAT, is similar to a very broad-based sales tax, except it is reduced by VAT paid on inputs so the final consumer doesn't bear multiple layers of tax. It is beginning to come up as a way to finance the borrowing done by the government in the COVID-19 crisis.

Sports Betting Will Not Solve State Budget Crises - Ulrik Boesen, Tax Policy Blog. " Due to their narrow base, they are not a sustainable source of revenue for general spending priorities."

Then again, a modest winning bet on the Royals and Pirates facing off in this year's World Series ought to equal at least a few months revenue lost to the Coronavirus.

What's the Opposite of Goodwill? "Operators of California Charity Plead Guilty to Mail Fraud Conspiracy and Tax Evasion; Sold Over $1 Million in Donated Clothes for their Personal Benefit" - Department of Justice:

According to court documents and statements made in court, married couple [defendants] operated On Your Feet (OYF), also known as Family Resource Center, a tax-exempt charitable organization whose stated mission was to provide assistance to low income families and individuals in need. From 2011 through 2016, the defendants fraudulently obtained more than $1.35 million in donated clothing and other items by falsely representing to the donors that the items would be given to needy recipients. In fact, the defendants made charitable donations of only about $13,000, sold the remaining donated items, and used the proceeds to financially enrich themselves and others. To conceal their conduct from the Internal Revenue Service (IRS), the defendants filed false charitable tax returns for OYF and false personal tax returns that did not report the income they received from their scheme.

I suspect the remaining $13,000 donated might not have been their best inventory.