“The clarification that there is no 60 percent cliff for payroll expenses helps a lot,” Joe B. Kristan of Eide Bailly LLP told Tax Notes. “That is very borrower-friendly when it is often unwise or difficult to increase payroll."

Kristan similarly said that the 24-week period comes as major relief for many of his clients facing the eight-week deadline, but Treasury and the SBA have plenty of questions they’ll need to work through as they implement the new law. That includes questions such as whether a borrower who spends all the borrowed funds within, for example, 15 weeks still has to meet requirements through week 24, or if a borrower has to wait until the after week 24 to begin the loan forgiveness process.

Sadly, they didn't use my quote about how hard it is to coach Calvinball.

SBA Announces That, Despite Language in PPPFA, No 60% Cliff on Forgiveness on PPP Loans - Ed Zollars, Current Federal Tax Developments. "The PPPFA adds two new safe harbors that protect borrowers against reductions in the forgiveness amount in certain circumstances."

The IRS said that an EO may carry back CARES Act NOLs attributable to an unrelated trade or business even if the organization wouldn’t have had a CARES Act NOL if the deduction in the relevant tax year had been calculated on an aggregate basis.

However, an EO may not deduct CARES Act NOLs against aggregate UBTI in tax years that begin after December 31, 2017, if any CARES Act NOLs remain after being carried back to tax years starting before January 1, 2018, the IRS said.

Explanations of the verb "Silo" and the acronym "UBTI" are in order. The Unrelated Business Income Tax is more or less the C corporation tax system applied to non-profits, so that taxable businesses don't face unfair competition from tax exempt businesses. "UBTI" = Unrelated Business Taxable Income.

"Siloing" is the rule added to the 2017 Tax Cuts and Jobs Act" that prevents an exempt organization from offsetting income from one business with losses from another. That works for operating loss carrybacks allowed under the CARES Act, too, but only when the losses are carried to post-2018.

IRS Rules Target Coaches at Duke, Notre Dame, Hospital Chiefs - Sam McQuillan and Laura Davison, Bloomberg News. "The IRS issued guidance on Friday that implements a change in the 2017 tax overhaul, and levies a 21% excise tax on some non-profit employees’ salaries above $1 million. The tax could also hit many highly-compensated private college coaches as well as non-profit hospital executives, such as Kenneth Davis at Mount Sinai in New York or Yale New Haven Hospital’s Marna Borgstrom."

IRS Reopening More Offices in June - Russ Fox, Taxable Talk. "This is good news for everyone (taxpayers, tax professionals, and IRS employees). Unfortunately, it is going to take many months for the paper backlog to be resolved."

Treasury Proposes Expanding Deductible Medical Care Expenses - Eric Yauch, Tax Notes ($). "The IRS and Treasury issued proposed regulations (REG-109755-19) June 8 that allow deductions for direct primary care arrangements and healthcare sharing ministry memberships in some circumstances... The rules define a direct primary care arrangement as a contract between an individual and one or more primary care physicians in which the physicians agree to provide medical care for a fixed annual or periodic fee without billing a third party."

Treasury, IRS Rules Let High-Dollar Refunds Go Unreviewed - William Hoffman, TaxNotes ($). "The Treasury Inspector General for Tax Administration found 1,664 tax modules that exceeded the statutory minimum of $2 million for reporting to the JCT, according to an audit released June 8, just days after another TIGTA report indicated that the IRS was slow-walking enforcement of $45.7 billion in taxes owed by high-income nonfilers."

Professor Cries Foul on Passport Suspension on Canadian Account - Andrew Velarde, Tax Notes ($). "Cunfer timely appealed the penalties, though his appeal was ignored by the IRS, according to the complaint. Additionally, although a collection hold was allegedly placed on Cunfer’s account, the IRS still certified there was a seriously delinquent tax debt, leading to the secretary of state suspending his passport."

It was never a good idea to tie passports to tax debt. Anybody who has dealt with IRS collections and their computers knew that mistaken passport revocations were inevitable.

Lesson From The Tax Court: Do The Right Thing - Bryan Camp, TaxProf Blog. "I offer two recent Tax Court as a cautionary lesson that I hope makes tax professionals question their perspective about the right thing to do in tax return preparation and advice.  It’s not about race or class.  It’s about being blindered by client needs and client relationships, both on the part of taxpayers and the IRS."

With the May jobless rate at 13.3 percent—an improvement over April but still terrible-- policymakers are considering many ideas to support workers in the COVID-19 economy.  One would continue government incentives to not work, an idea that seems crazy in normal times but may make sense today, when the pandemic still is keeping many people at home. The others would subsidize work, mostly by providing new tax breaks to employers. But each has different features and would produce very different results.

Results that are likely to be not exactly those intended.

Global Pandemics and Economic Uncertainty: The Importance of Error-Correction Mechanisms in Crisis - Orli Oren-Kolbinger, Procedurally Taxing. "This blog post seeks to explain why the ability to correct tax election errors is especially important during times of global pandemic and economic uncertainty. Focusing on married taxpayers’ filing status election, I discuss the archaic and asymmetric error-correction rule that applies when married taxpayers seek to correct a tax election after the due date has passed."

A Road Map to Recreational Marijuana Taxation - Ulrik Boesen, Tax Policy Blog. "Since 1970, the U.S. federal government has considered marijuana a schedule 1 controlled substance. This categorization, shared with drugs such as heroin and LSD, means the federal government deems marijuana to be a dangerous drug with a high potential for abuse and no accepted medical use.[1] Nonetheless, according to state laws, it is legal for adults over 21 years of age to grow, process, sell, or consume recreational marijuana in 11 states." 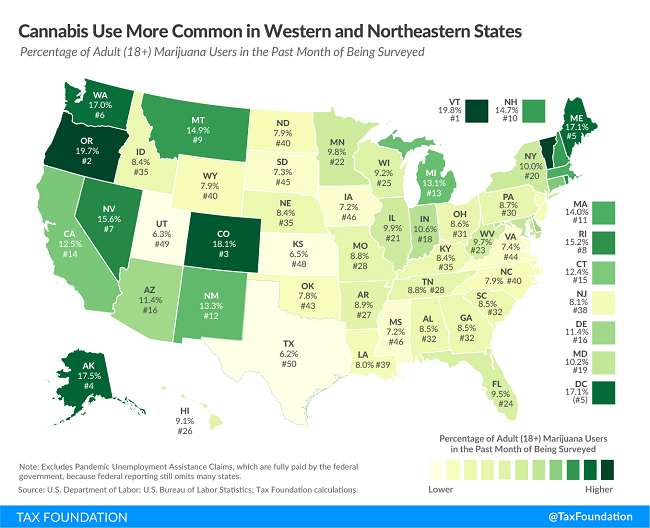 The potential for flooding was part of the reason that the White House on Sunday, June 7, issued a federal disaster declaration for Louisiana.

That decision allows the federal government to help pick up some of the state's disaster response costs.

It also will give those who sustained Cristobal-related damages a chance to claim those losses on their taxes.

Cristobal's remains will track across Iowa today. According to the local National Weather Service office, the last time a tropical storm made it to Iowa was 1900, when the great Galveston hurricane stopped by. Wasn't that a mighty storm?