The Senate passed the Paycheck Protection Program Flexibility Act of 2020 (H.R. 7010) by unanimous consent June 3 after lawmakers worked throughout the day to ease concerns raised by several Republicans.

The measure, which was passed by the House 417 to 1 on May 28, would give businesses 24 weeks instead of eight to use the loan money and still qualify for forgiveness.

Sens. Marco Rubio, R-Fla., and Susan M. Collins, R-Maine, argued that the bill would prevent companies from receiving any loan if they used less than 60 percent of their funds on payroll. But both lawmakers, who played instrumental roles in creating the small business loan program, did not stand in the way of the bill’s passage.

How to Maximize Your Loan Forgiveness Under the Paycheck Protection Program

Also: "Except for the five-year loan term provision, all changes apply as though they were part of the original CARES Act."

Congress Agrees On Favorable Changes To Paycheck Protection Loans: What Does It Mean For Borrowers? - Tony Nitti, Forbes. "H.R. 7010 will greatly increase the likelihood that a large percentage of a borrower’s PPP loan will be forgiven. It does so in four ways."

Payroll Protection Program Flexibility Act of 2020 Enacted Into Law - Ed Zollars, Current Federal Tax Developments. "Congress has now passed the Paycheck Protection Program Flexibility Act of 2020 (PPPFA),[1] with the Act passing the Senate by unanimous consent in the early evening hours of June 3, 2020.  The Act changes a number of provisions in the original PPP loan program enacted as part of the CARES Act. The President is expected to sign the bill into law."

Paycheck Protection Loan Forgiveness Just Got Easier - Peter Reilly, Forbes. "In the original CARES model borrowers had eight weeks to spend the money. That has been extended to twenty-four weeks. Since the loan was based on two and half months of the prior year payroll (That is a simplification), that creates significant breathing room."

IRS Announces Signatory Relief for Retirement Plan Participants - Tax Notes ($). "Notice 2020-42 provides participants, beneficiaries, and administrators of qualified retirement plans and other tax-favored retirement arrangements with temporary relief from the physical presence requirement for any participant election (1) witnessed by a notary public in a state that allows remote notarization, or (2) witnessed by a plan representative using specified safeguards."

Now, No Fee To Replace Lost Or Trashed Stimulus Prepaid Debit Cards - Kelly Phillips Erb, Forbes. "The debit card will arrive in a plain envelope from “Money Network Cardholder Services.” The Visa V name will appear on the front of the card; the back of the card has the name of the issuing bank, MetaBank®, N.A. The information included in the envelope will explain that the card is your Economic Impact Payment Card."

HEROES Act Would Expand The EITC For Childless Workers And Help Fight Recession - Elaine Maag, TaxVox. "A permanent expansion of the EITC for childless workers would provide more consistent economic assistance and make it easier for policymakers to deliver special payments in future recessions (much as the initial round of CARES Act rebates is doing this spring)."

The current approach also leads to a specific allocation of the scarce service: The service is allocated to taxpayers who place a relatively low value on their time, who are better able to cope with the anxiety, who lack family or friends who can help, who are less confident of their ability to research the answer themselves, or who are less able or willing to incur the out-of-pocket cost of using a private sector alternative.

There appears to be no easy way for the IRS to provide high-quality telephone assistance as is demanded by the agency’s critics. The current approach of muddling through with a low-quality service may be the best that it can do for now, at least until technology or tax simplification operates to reduce the demand for one-on-one assistance to a level the government is willing to fund.

When the tax law is hard enough to perplex highly-paid tax pros, it's asking a lot of a call center to be able to handle it.

Can Intentionally Filing an Improper Information Return Justify a Claim for Damages Under Section 7434? - Omeed Firouzi, Procedurally Taxing. "Most courts that have ruled on this issue have found that a taxpayer who is misclassified as an independent contractor – and thus receives a Form 1099-MISC rather than a Form W-2 – does not have a cause of action under Section 7434."

How High are Vapor Taxes in Your State? - Janelle Cammenga, Tax Policy Blog. "Vapor products have been growing in popularity since they entered the market in 2007, and taxation on such items has been following suit. Many states may also be looking toward vapor and other excise taxes to fill budget holes caused by the coronavirus crisis. While those areas may represent untapped revenue sources for many states, taxing those activities is unlikely to raise much revenue in the short term." 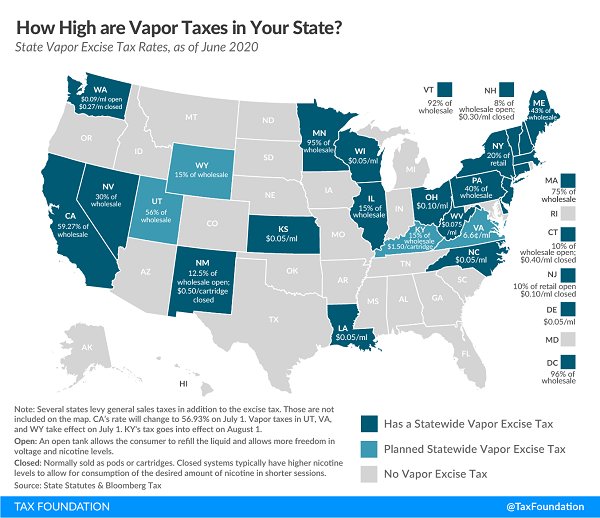 "A recent publication found that 32,400 smokers in Minnesota were deterred from quitting cigarettes after the state implemented a 95 percent excise tax on vapor products."

The Chiefs' tax attorneys, like the team they represented, had to come from behind for this legal victory. An earlier Administrative Hearing Commission (AHC) had gone against them.

This time, though, the KC counselors' arguments before the Missouri high court apparently were as persuasive as the on-filed actions of the team's players back on Feb. 2. Back then in South Florida, the Chiefs put up 21 unanswered fourth quarter points to capture the professional U.S. football league title.

A $1 million sales tax victory. Not the Super Bowl, but not bad.