Rubio Reluctantly Backs PPP Expansion Bill - Jad Chamseddine, Tax Notes ($). This is the bill approved by the House last week that would give businesses 24 months to use Paycheck Protection Plan loan funds. From the article:

The bill would also reduce the threshold for the amount of loan money to be spent on payroll from 75 percent to 60 percent.

Rubio says the way the bill is written could have negative consequences on businesses that spend slightly less on payroll. “If you don’t spend 60 percent on payroll, if you only reach 59.9 percent of payroll, you’re going to get zero forgiveness on the whole thing,” he said. “I just want people to know that’s in there.”

Assuming it can survive the Senate's unanimous consent rules for fast passage, it could come to a vote quickly, but the Senate may have other events on its plate now.

SBA Says Farmers in Chapter 12 Ineligible for PPP Loans - Roger McEowen, Agricultural Law and Taxation Blog. "The rationale given was that making a PPP loan to an applicant in bankruptcy would be too risky – either via unauthorized use of funds or non-repayment of unforgiven loans."

Why Do We Need Public Companies To Hand Out Free Money? - Peter Reilly, Forbes. "Yesterday I told you about my friend who thought their Economic Impact Payment was likely either junk mail or some sort of scam. It turns out that if we had been reading Kelly Erb regularly we wouldn’t have been so mystified. She had let people know about it back on May 19 and had followed up on May 27 with “Don’t Mistake Your Stimulus Check (Or Debit Card) For Junk Mail”."

Iowa AG announces more help with coronavirus stimulus debit cards - Kathie Obradovich, Iowa Capital Dispatch. "About 200 Iowans contacted the attorney general’s office with questions and concerns about the cards, including potential fraud, customer service, access, fees and other problems. Many people threw the cards away, believing they were a credit-card solicitation or a scam."

However, losses attributable to a federally declared disaster may be deducted on the taxpayer’s prior-year return under section 165(i), allowing taxpayers that suffered a loss and are in need of cash the opportunity to monetize those losses more quickly and reinvest in their business by reducing prior-year taxes.

The general rules for deducting losses (reg. section 1.165-1(b)) require that the loss be evidenced by closed and completed transactions, fixed by identifiable events, and actually sustained during the tax year.

The potential attraction of claiming a loss and refund on a 2019 return, instead of waiting until the 2020 return is filed, is obvious. But the COVID-19 disaster is different from hurricanes, earthquakes and other disasters where it is relatively easy to identify what losses are attributable to the catastrophe. The story says "Practitioners have raised myriad questions on how the provision that has most often been applied to property casualty losses would apply to the pandemic, suggesting that it’s an area in need of IRS guidance."

IRS Lapsing in Enforcement of High-Income Nonfilers - Alexis Gravely, Tax Notes ($). "For tax years 2014 through 2016, nearly 880,000 high-income individuals — classified as those earning $100,000 or more — didn’t satisfy their filing requirements, TIGTA said in its report, released June 1. An estimated $45.7 billion in taxes were due from the nonfilers."

From the report itself (free link, pdf): 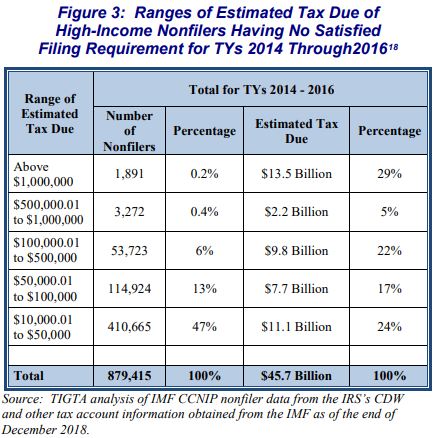 Nonfilers are identified based on previous filing history and third party reports, such as 1099s and W-2 forms. The IRS apparently is leaving around $13 billion on the table from fewer than 2,000 non-filers that it knows about. Doesn't seem quite fair to those of us who go to the trouble of filing.

Lesson From The Tax Court: Litigation Funding Agreements Were Not Loans - Bryan Camp, TaxProf Blog. "While there is a lot more to learn about loans, the lesson here is simple: a contingent repayment obligation makes it all but impossible to claim that a transaction is a loan for federal income tax purposes."

COVID-19 And Government Actions Caused State Tax Revenues To Plunge In April - Lucy Dadayan, TaxVox. "Declines in sales tax revenues have been fast, steep, and widespread across the states. April collections, mostly reflecting March sales, fell 16 percent in the 42 states for which we have complete data."

Returning lawmakers to craft new state budget - Rod Boshart, Waterloo-Cedar Falls Courier. "A state revenue estimating panel Friday shaved off more than $500 million in expected tax collections for the next 13 months due to economic hit the coronavirus pandemic delivered to Iowa’s economy." Not a small hit to a state budget in the neighborhood of $8 billion.

The survey says the compliance rate is under 40% for businesses with fewer than 20 employees. Non-compliance with sales tax rules gets more dangerous as states become more desparate for revenue.

S.B. 972, authored by Senate Majority Whip Nancy Skinner (D), was approved by the Senate Governance and Finance Committee May 28. It would authorize the Franchise Tax Board to create a list of corporate taxpayers with over $5 billion in gross receipts, minus returns and allowances, for the tax year reported on a return in the previous calendar year.

For what its worth, California would strip the professional license of a preparer who did that.

5 tax moves to make this COVID-19 affected June - Kay Bell, Don't Mess With Taxes. "1. Get your filing material in order."

IRS Says You Can Amend Your Taxes Electronically, But Should You? - Robert W. Wood, Forbes. "Ask yourself whether the return you filed was accurate to your best knowledge when you filed it. If not, you should probably amend."

Just a good, generous friend. A good friend is a great tax advantage. But sometimes the nature of that friendship can be hard to explain to the Tax Court.

The tax law doesn't include true gifts in the income tax base. Given the obvious incentive to call business transactions gifts under those circumstances, the tax law doesn't just take your word for it, as a Florida man learned in Tax Court yesterday.

The Floridian received $24 million in wire transfers from an associate who was a UK citizen, who we will call "John Bull" (not his real name), personally and via offshore trusts. The taxpayer treated the transfers as gifts and left them off his 1040. The IRS didn't agree, and things ended up in Tax Court.

The tax law has special skepticism towards "gifts" from offshore taxpayers that might not be inclined to preparer information returns, like W-2 forms and 1099s, to report income. That's why the tax law requires recipients of gifts from non-U.S. payors to report gifts on Form 3520 when the exceed certain (relatively low) thresholds. Stiff penalties apply for non-filers.

The court explains the rules:

Gross income is income from whatever source derived unless otherwise excluded. Sec. 61(a). Gross income, however, does not include the value of property acquired by gift. Sec. 102(a). The United States Supreme Court has defined a gift under section 102 as a transfer that proceeds from a detached and disinterested generosity, out of affection, respect, admiration, charity or like impulses. Commissioner v. Duberstein, 363 U.S. 278, 285 (1960). In so doing, the Supreme Court stated that the most important consideration in ascertaining whether a gift has been made is the intention of the donor.

The case turned on the Tax Court judge's opinion of whether the taxpayer was credible in saying the transfers were gifts, instead of something else, like a payment for services. As in many income tax matters, it's up to the taxpayer to prove that the income was a gift. The judge wasn't persuaded:

...Because petitioner bears the burden of persuading this Court that the transfers were gifts and not income, and has failed to carry that burden, the deficiencies determined in the notice of deficiency are sustained.

The Moral? If some nice guy from overseas gives you $24 million, terrific! But you'll need a good explanation at tax time.