Is it happening? The prospects for a lame-duck COVID relief bill that will include deductions for expenses triggering PPP loan forgiveness seem brighter today after Congressional leaders emerged from negotiations yesterday. The Wall Street Journal reports ($):

Text of a bipartisan compromise bill that apparently is the basis for discussions has emerged. The bill includes this language: 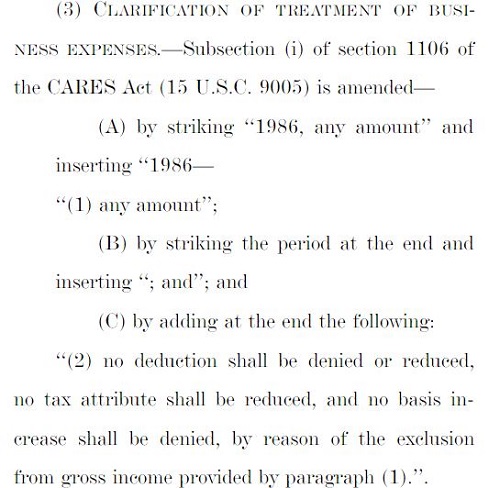 S corporation and partnership owners will be interested the "basis" reference. It confirms that the forgiveness will increase basis in S corporation shares and partnership interests. It doesn't address the whipsaw issue that may face some S corporations that made distributions in 2020 and then suffered losses. Here's how it works:

It seems clear that PPP forgiveness should be treated as an OAA item. The question will be whether deductible expenses triggering forgiveness will be considered OAA expenses "related" to tax-exempt income. If so, they won't reduce the ability to make S corporation distributions -- helping to avoid unexpected whipsaw taxes on business that made 2020 distributions.

Relief Bill to Be Paired With Spending Package - Jad Chamseddine, Tax Notes. "Business groups breathed a sigh of relief upon learning that the relief package includes language from a bill by Senate Finance Committee member John Cornyn, R-Texas, that would allow businesses to deduct PPP-affiliated expenses."

Congressional negotiators are on the brink of a coronavirus rescue package that would include a second round of direct payments, but would likely leave out state and local funding and a liability shield, according to multiple sources involved with and briefed on talks.

The price tag of the emerging deal is nearly $900 billion, and a deal could be finalized as early as this morning, those sources said.

Also: "The direct checks will likely be far less than $1,200 per person, in order to keep the cost of the bill in check."

Eligibility for Employee Retention Credit May Survive Acquisition of a PPP Loan Borrower - CCH Tax & Accounting Blog. "In most circumstances, the Acquiring Employer’s group and its members remain eligible for the credit, but in some circumstances, the Target Employer remains ineligible."

PPS Gets Friendlier: Callbacks Available - Russ Fox, Taxable Talk. "After entering my callback number (it does require a direct phone number), I was told I would receive a callback in 20 minutes…and I did! This is a marked improvement, and I’m surprised the IRS hasn’t publicized it."

Are Lawsuit or Settlement Damages Taxable? - Matthew Roberts, Freeman Law. "Generally, federal courts and the IRS characterize judgment and settlement payments according to the “origin of the claim” test.  Under this test, any amounts received from a judgment or settlement will be characterized for federal income tax purpose as a substitute payment for the claims or damages the taxpayer asserted or incurred.  Significantly, the origin of the claim test is used to determine whether an amount is taxable or non-taxable and also, if taxable, whether such amount constitutes ordinary income or capital gain."

IDR Releases Updated State Tax Guidance: Online & Marketplace Sales Guidance - Iowa Department of Revenue. "In response to the COVID-19 pandemic, many retailers have established or strengthened their online presence to make sales to their customers or perhaps reach new ones. While retailers with physical locations in Iowa are likely aware they should obtain an Iowa sales tax permit and collect on sales of taxable products and services, some retailers may not be aware that online sales are also taxable or that sales made online to customers outside of Iowa may require collection of sales tax in another state."

IRS Extends Electronic Signature Program Covering Limited Number of Forms Through June 30, 2021 - Ed Zollars, Current Federal Tax Developments. "Note that only the following forms are covered by this program.  Other forms that must be filed in paper form still require physical signatures rather than electronic ones."

It would be nice if the IRS would get beyond the 19th century for all of its forms.

If you receive unemployment benefits, expect to receive Form 1099-G - Kay Bell, Don't Mess With Taxes. "Unemployment compensation is taxable income. Recipients have the option to have taxes withheld from the payments, but most don't. That's understandable. In the here-and-now when the money is needed, people who are getting the benefits need every available penny to help cover their living expenses."

Creditor Tries to Amend Taxpayer’s Return - Keith Fogg, Procedurally Taxing. "If someone owes you money and a debt to the IRS stands between you and the ability to receive payment, wouldn’t it be nice if you could review the person’s return, find mistakes that would reduce the liability and file an amended return in order to significantly reduce or eliminate the liability to the IRS and open up a payment path for yourself?"

But, in general, after the pandemic, remote proceedings are going to be a valuable tool in our toolbox. I mean, it took an amazing amount of effort to put us in the position we're in today. I don't want to go backwards. I want to move forward. I don't want to simply return to the pre-pandemic state of affairs.

Biden’s Corporate Rate Increase Would Raise Revenue Efficiently and Progressively - Thornton Matheson, TaxVox. "TPC estimates that a 7-point increase in the corporate tax rate starting in 2022 would raise about $740 billion over the 10-year budget window (2021-2030). This would increase the average tax rate on corporations—the ratio of income taxes paid to total profits—by about 3 percentage points (figure 1)."

How 2020 could be worse? Maybe with a devastating Midwest earthquake. The Great New Madrid Earthquakes rocked southeast Missouri and neighboring state on this date in 1811. From Smithsonian Magazine:

“The screams of the affrighted inhabitants running to and fro, not knowing where to go, or what to do—the cries of the fowls and beasts of every species—the cracking of trees falling...formed a scene truly horrible,” wrote one resident.

As people were starting to rebuild that winter, two more major quakes struck, on January 23 and February 7. Each New Madrid earthquake had a magnitude of 7.5 or greater, making them three of the most powerful in the continental United States and shaking an area ten times larger than that affected by the magnitude 7.8 San Francisco earthquake of 1906.

We have a couple of weeks left; maybe we shouldn't bait 2020.