A new bipartisan outline would continue to help small businesses affected by the pandemic by allowing them to deduct expenses paid for with loans from the Paycheck Protection Program.

The Bipartisan Emergency COVID Relief Act of 2020, released by a group of Senate and House lawmakers December 9, sets out the deductibility of business expenses paid for with the proceeds of PPP loans. It builds on a framework announced last week that also intended to make PPP loan expenses tax deductible.

The article discusses the possibility of including relief for remote workers, noting the opposition of key New York lawmakers to limiting their state's ability to tax non-residents: "Schumer has not been the only New Yorker to stand in the way of the measure. House Judiciary Committee Chair Jerrold Nadler, D-N.Y., has also lobbied against prior mobile worker bills, arguing that they would hurt New York’s revenue stream."

Will There Be Second Stimulus Check Before End of 2020? - Kristina Peterson and Richard Rubin, Wall Street Journal ($):

Where do the talks stand? A bipartisan group of lawmakers has been working for weeks on a $908 billion package of coronavirus aid, much of which has been agreed upon. But lawmakers are still in negotiations over how to work out the two thorniest components: funding for state and local aid and what sort of legal protections to provide businesses, schools and other entities operating during the pandemic. Lawmakers have said they hope to finalize an agreement and turn it into legislative text in the next couple of days. Congressional leaders have been involved in the discussions, but could play a larger role in coming days.

The package does not include more individual payments, but the Trump administration and some members of Congress are pushing for them. Still, "Both Republicans and Democrats said it didn’t make sense to send out checks to a broad range of people, rather than focus that assistance for those who had lost their jobs."

Sharing, Silence, and a Suit - Renu Zaretsky, Daily Deduction. " A compromise seems to be hung up on three issues: Whether to include a new round of stimulus payments, those increased unemployment benefits, and liability protection for firms that are sued by workers whose customers contract COVID-19. But the real issue sems to be the deep divisions within the Senate GOP."

How R&D Can Help Startups Gain Return on Investment - Jim Donovan, Eide Bailly. "However, the PATH Act provides an election for startups to offset their payroll tax liability with the R&D tax credit. Using the R&D tax credit in lieu of precious cash each quarter for payroll taxes keeps money in the business to invest in other assets."

If a taxpayer owns or leases a parking facility, the final regulations follow the proposed rules and provide that the taxpayer may use the general rule or choose any of the three simplified methods for each parking facility to determine the section 274(a) disallowance for each tax year. The general and three simplified methods are “substantially the same” as those provided in the proposed regulations, the IRS said.

Washington Governor Again Extends DOR Waivers - Tax Notes. "Washington Gov. Jay Inslee (D) issued a proclamation further extending a previously issued proclamation that ordered waivers of penalties, fees, and interest imposed by the Department of Revenue on taxpayers affected by COVID-19; the relief is in place until the declaration of emergency is lifted or January 19, 2021, whichever occurs first."

Massachusetts DOR Extends Sourcing Rules for Telecommuting Employees - Carolina Vargas, Tax Notes. "Nonresidents who work in Massachusetts but are telecommuting because of the COVID-19 pandemic will continue to be subject to the state's personal income tax."

Get Ready for Taxes: What’s new and what to consider when filing in 2021 - IRS. "If a taxpayer didn't receive the full amount of the Economic Impact Payment for which they were eligible, they may be able to claim the Recovery Rebate Credit when they file in 2021. Individuals do not need to complete information about the Recovery Rebate Credit on tax year 2020 Form 1040 or 1040-SR when filing in 2021, unless eligible to claim an additional credit amount."

SBA Adds Question and Answer to PPP FAQ Regarding Forms 3509 and 3510 - Ed Zollars, Current Federal Tax Developments. "The new form, initially reported about on October 30, 2020, is being sent to borrowers who face scrutiny regarding whether their certification that their loan request was necessary given the current economic uncertainty was made in good faith."

Despite COVID, 'tis still the season for office holiday parties, bonuses and taxes - Kay Bell, Don't Mess With Taxes. "If you're committed to an in-person event, the tax code — even under changes made by the Tax Cuts and Jobs Act (TCJA) enacted in late 2017 — allows in most cases for tax-free office parties, as well as nontaxed small gifts to workers." 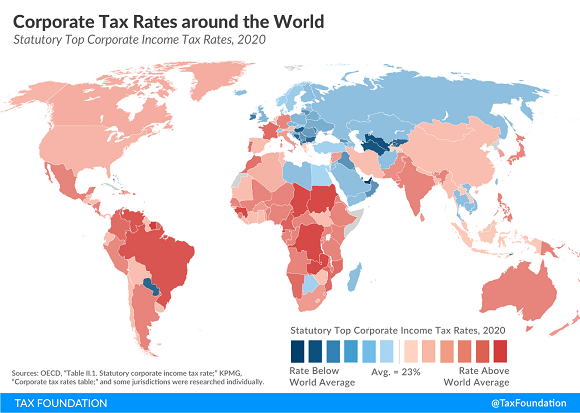 The top US rate came down to 21% from 35% only in 2018. The rates on the mal appear to reflect state and regional income taxes within countries.

Trump May Reduce Student Loan Debt and Taxes - Benjamin Willis, Tax Notes Opinions. "In anticipation of the September expiration of the CARES Act's student loan relief, on August 8 the Trump administration extended the relief through December 31. With no sign of additional relief from Congress, on December 4 the Trump administration extended student debt relief through the end of January 2021 — 11 days into the Biden-Harris administration — to prevent a gap between presidential terms that would leave students without relief."

CAUTION: Restructuring Your Debt May Create Cancellation of Debt Income - Kyle Propsner and Nastassja Markham Coletta, Tax Warrior Chronicles. "You may unknowingly trigger cancellation of debt (“COD”) income when you modify the terms of your debt."

Coinbase Switches From 1099-K to 1099-MISC: A Better Mousetrap or Prelude to Litigation? - James Creech, Procedurally Taxing. "The switch from a 1099-K to a 1099-MISC could be dramatic for a large number of Coinbase users.  Form 1099-K reports gross transactions to the IRS if the taxpayer exceeds 200 transactions or a $20,000 threshold.  The standards for Form 1099-MISC reporting are much lower."

FBI Assistant Director William F. Sweeney Jr. said:  “Taking advantage of the ever-so-popular cryptocurrency market, Elmaani allegedly capitalized on the investments of those who purchased virtual currency through Oyster Pearl, which he founded.  As it turns out, Elmaani was funneling the proceeds of his alleged cryptocurrency scheme through a shell company that hid the true nature of his financial interests, ultimately never paying taxes on his earnings.  With minimal reported income in 2018, he still managed to spend over $10 million for the purchase of yachts, but after today’s arrest, he won’t be sailing anywhere anytime soon.”

Cryptocurrency isn't a surefire way to get around taxes.

Today in history: General William T. Sherman completes March to the Sea - History.com. No Georgia income taxes were collected on the federal employees temporarily in the state.