Senate Democrats voted against proceeding with a $500 billion pandemic relief package that would reimburse parents for giving to scholarship funds, increase the deduction for charitable contributions, and continue the small business loan program.

The amendment to S. 178 was rejected October 21 along party lines, 44 to 51, leaving the measure short of the 60-vote mark it needed to pass.

Coronavirus Stimulus Vote Could Come After Election Day, Negotiators Say - Kristina Peterson, Wall Street Journal ($). White House officials and House Speaker Nancy Pelosi opened the door to passing a coronavirus relief package after the election, a signal that time and political will has likely run out to enact legislation before then."

Congressional Rules and ‘UFOs’ May Complicate Biden’s Tax Hopes - Jonathan Curry, Tax Analysts. "If Biden wins and Democrats take control of Congress, Democrats won't be off to the races on tax reform, thanks in large part to the Senate."

28,000 Charities Had Tax-Exempt Status Revoked After Trump Administration ‘Error,’ Lawmakers Say - Alison Durkee, Forbes. "The lawmakers suggest the issue appears to be a mistake by the IRS after the tax filing deadline for organizations was changed from May 15 to July 15, as the IRS’s Automatic Revocation of Exemption List shows many organizations had their exempt status revoked on May 15."

In a report released in March, the Treasury Inspector General for Tax Administration noted the potential for marijuana businesses to argue that they’re entitled to use a method of accounting that includes expenses in cost of goods sold to avoid section 280E. Practitioners had warned cannabis businesses to be cautious about taking that tack even before that report was released, and following the report, Kat Allen of Wykowski Law wrote in Tax Notes that trying to circumvent section 280E using section 471(c) was a “quixotic strategy” unlikely to end well for taxpayers.

Details on High-Income Audit Initiative's Scope and Timing Emerge - Andrew Velarde, Tax Notes ($). "The new joint audit effort between the Large Business and International Division and the Small Business/Self-Employed Division, which was announced in June, has now begun with the first several hundred exams of high-income taxpayers, according to Holly Paz, director (passthrough entities), LB&I. More exams will be opening soon as examiners look for 'large, unusual, or questionable items,' she added."

Fourth Circuit Holds Taxpayer Liable for Willful FBAR Penalty - Jack Townsend, Federal Tax Crimes. "The Court applied the expansive definition of willfulness that has taken hold to mean recklessness, a standard significantly less stringent than the Cheek standard applicable to tax and FBAR crimes that the taxpayer must specifically intend to violate a known legal duty."

Comparing Europe’s Tax Systems: Corporate Taxes - Elke Asen, Tax Policy Blog. "Our corporate income tax component scores countries not only on their corporate tax rates but also on how they handle net operating losses, capital allowances, inventory valuation, and allowances for corporate equity, whether and to what extent distortionary patent boxes and R&D tax incentives are granted, and on the complexity of the corporate income tax." 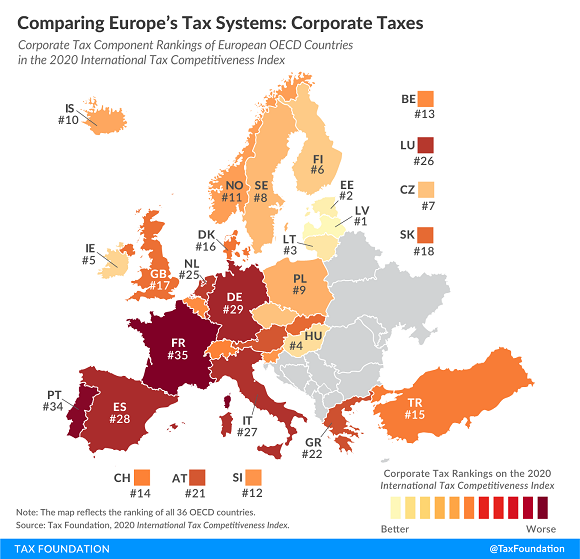 Baltic states lead the way, France brings up the rear.

Business Meals Tax Deduction Updates and the Impact on Restaurants - Marie Sapirie, Tax Notes Opinions. "It’s been an especially rough year for the restaurant industry, but the IRS and Treasury recently served up a soupçon of good news for struggling establishments, and a menu of other options awaits action in Congress. Adjusting the tax rules won’t solve the underlying problem that the business model of restaurants is predicated on social interaction that must be limited in a pandemic, but it can ameliorate some of the financial fallout."

Biden-Harris Proposals Can Raise Taxes on the Middle Class - Taylor LaJoie, Tax Foundation. "Here it is important to separate the legal or statutory incidence of a tax with the economic incidence. In short, this is the difference between who writes the check to the tax collector and who ultimately bears the economic burden of the tax."

Happy Birthday to the Internal Revenue Code of 1986. 34 years ago today, President Reagan signed into law the Tax Reform Act of 1986. 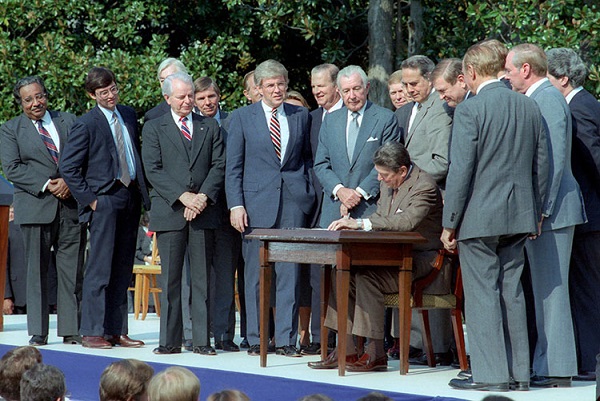 The 1986 Code introduced many key features in the tax law, including the passive loss rules, inventory capitalization, restricted personal interest deductions, and the modern alternative minimum tax. It reduced the top individual tax rate from 50% to 28%, and the top corporation rate from 46% to 34%.