Businesses large and small are considering numerous changes that may affect them with tax reform legislation, informally called the Tax Cuts and Jobs Act. Here are some key business-related provisions for insurance company consideration that were included in the act.

The top corporate tax rate was reduced to 21 percent on January 1, 2018. The 21 percent rate is a “flat” tax that will apply regardless of a regular corporation’s taxable income; the progressive rate structure imposing a maximum 35 percent corporate tax rate is eliminated. For a fiscal year regular corporation, with a tax year ending in 2018, the new 21 percent rate will be “blended” with the rates in place prior to January 1, 2018.

The act also repeals the corporate Alternative Minimum Tax (AMT) for tax years beginning after December 31, 2017. For calendar-year corporations, the change in rate will not affect your current calculation but the new rate should be considered in the calculation of your deferred tax asset and liability calculations. For fiscal-year corporations, the “blended rate” as discusses above should be used. These rates are applicable to insurance companies as well.

Qualifying business property, generally whether new or used, acquired and placed in service after September 27, 2017, and before January 1, 2023, will qualify for 100 percent expensing. After 2022, under the act, the expensing amount is phased down over four years: 80 percent for 2023, 60 percent for 2024, 40 percent for 2025 and 20 percent for 2026. For some types of property with long production periods and certain aircraft, these dates are extended one year. In addition, the act increases the section 179 expensing limits. It also expands the definition of section 179 property, for property placed in service after 2017, to include tangible personal property used in furnishing lodging (such as furniture and beds in hotels and apartments) and certain improvements to non-residential real property (such as roofs, HVAC property, fire and alarm systems and security systems).

The act eliminates, after 2017, deductions for entertainment, amusement or recreation expenses, membership dues for clubs and expenses for facilities related to these items. These changes will also require taxpayers to review their prior activities related to meal expensing beginning in 2018 and make changes accordingly. While taxpayers will still be able to deduct 50 percent of certain meal expenses associated with operating their businesses, including meals during employee travel—the act extends the 50 percent deduction limit to employer-operated eating facilities through 2025. The act also disallows deductions for qualified transportation fringe benefits and certain expenses to provide commuting transportation for employees.

The following are key areas in relation to meals and entertainment expenses: 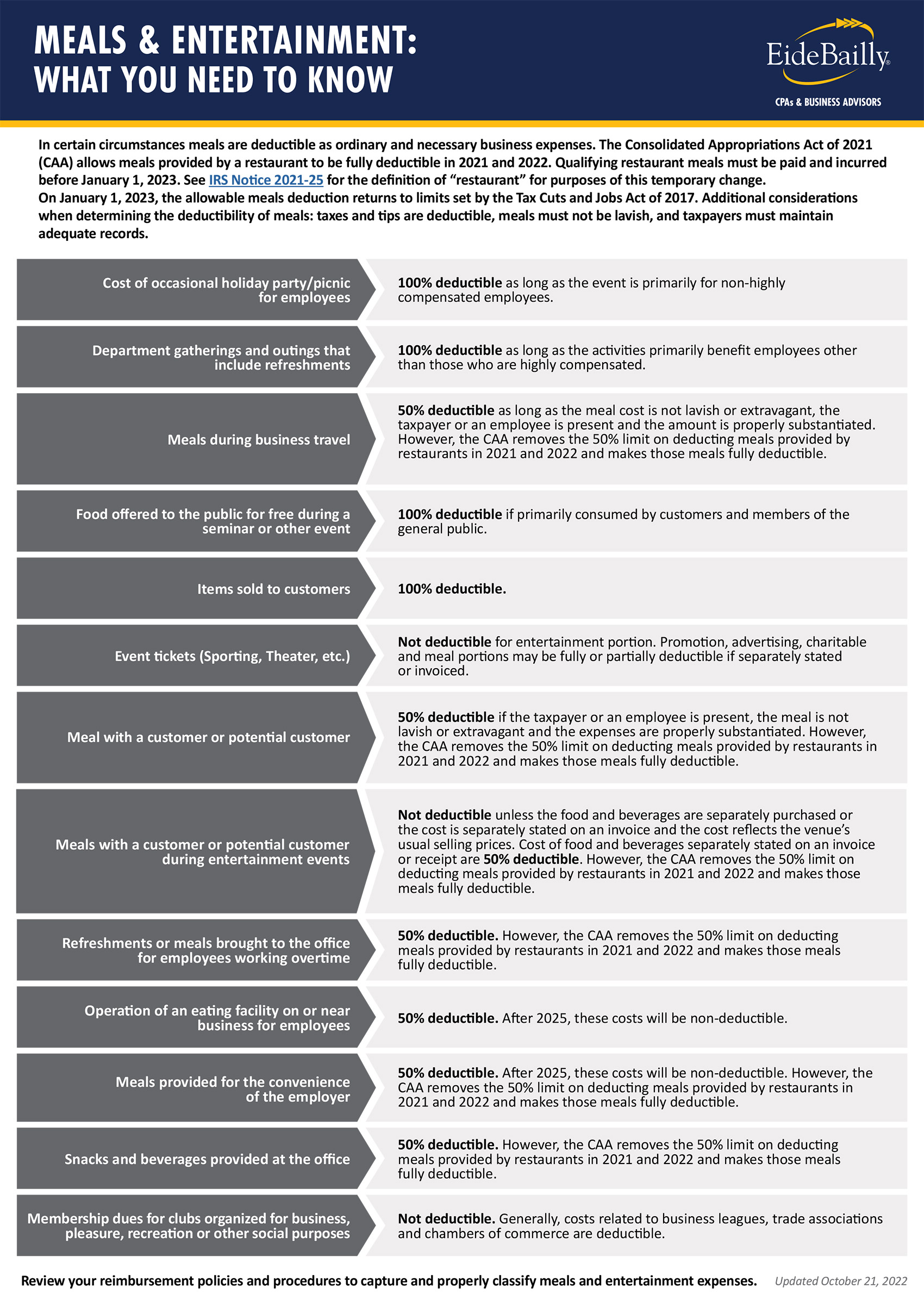 The proration calculation on life insurance companies, for any tax year beginning after December 31, 2017, will change from the dynamic calculation based on required interest calculations to a static 70 percent company share and 30 percent policyholder share.

There were several changes to the policy acquisition cost adjustments. The net premium adjustments percentages increased for annuities to 2.09 percent, group life to 2.45 percent, and all other policies to 9.2 percent. The amortization period was also increased to 15 years from 10 years. The five-year amortization on the first $5 million did not change.

Two other provisions that will influence some life insurance companies are the repeal of the small life insurance company deduction and the elimination of the tax deferral related to policyholder surplus accounts. Any stock life company that still has a policyholder surplus account, determined as of the close of the first tax year beginning before January 1, 2018, must include the balance in taxable income ratably over the first eight years beginning after December 31, 2017.

Provisions Related to Non-Life Insurance Companies
There were fewer tax reform provisions that will directly affect non-life insurance companies. In addition to the NOL changes mentioned above, the proration percentage was increased to 25 percent from 15 percent to reflect the change in the tax rate.

The only other significant change specifically related to non-life insurance companies is related to the calculation of tax reserves, which is effective for tax years beginning after December 31, 2017. Property and casualty insurance companies are no longer allowed to use the company pattern election and instead will have to switch to the aggregate industry-based payment pattern for discounting. The rate used to determine discounting has also been changed to the corporate bond yield curve rather than the federal mid-term rate. Like the life insurance reserve change, if the new calculation of reserves causes a difference to the prior method, determined as of the close of the first tax year beginning before January 1, 2018, the difference is includable in income ratably over the first eight years beginning after December 31, 2017. The section 847 special loss discount was also repealed, with the entire balance related to that election included in income in the first tax year beginning after December 31, 2017.

An Informed Approach
Businesses have much to consider in the changing tax landscape, especially as it relates to the immediate impact on tax-related calculations and disclosures. All corporations should consider the change in tax rate on deferred items as well as the repeal of the AMT. Corporations with current AMT credits will be able to offset their entire tax liability with those credits and are entitled to a refund of 50 percent of any credit remaining that exceeds their current tax liability in tax years 2018-2021.

For life insurance companies, admissibility testing will be impacted by NOL changes that no longer allow carry-back provisions that were previously considered in SSAP (Statement of Statutory Accounting Principles) 101, paragraph 11a. The NOL limitation of 80 percent will also limit admissibility in the with/without calculations of SSAP 101, paragraph 11b.

Non-life insurance companies retained the same NOL provisions as before so the only impact on admissibility is related to the changes in AMT.

It is important to discuss your situation with your tax advisors and consider the best options moving forward to take advantage of available opportunities. Ultimately, final decisions will depend on your particular facts and circumstances.

Contact your Eide Bailly professional for assistance with these and other changes made by the act.

Several important updates to the Paycheck Protection Program (PPP) have been released, including new loan calculation information for sole proprietors, as well as additional information concerning the government’s review of certain PPP loans.